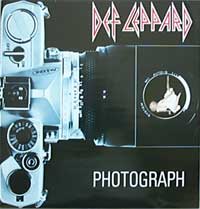 "Photograph" is one of the most famous songs and 1983 single by British band from their multi-platinum album "Pyromania". It was written for the late , as often stated before playing the song live in concerts. When released as a single later that year, it reached #1 on the charts and #12 on Pop Singles. More recently, the song was used in promotional ads for the DVD release of "Blades of Glory". "Photograph" is known for sparking the mainstream's awareness of .

Before the song starts a click created by guitarist accidentally catching the A string of his guitar can be heard.

* As said in the Rock Of Ages commentary, Joe Elliott stated that there are two versions of the music video, although quite similar, but the UK version excluded the knives as shown in the original's beginning parts and replaced it with a .
* The song is featured prominently in "".
* A band by the name of Malibu Storm recorded a cover version.