Club Atlético All Boys is a sports club based in the Floresta neighborhood of Buenos Aires, Argentina. The institution is mostly known by its football team, which currently plays at the Primera División, the top division of Argentine football league system.

The name "All Boys" reflected the youthfulness of its founders, and followed the Argentine tradition of naming football clubs in English, such as Newell's Old Boys, Boca Juniors, River Plate and Racing Club had done before.

All Boys has been taking part of championships organised by Argentine Football Association since 1937. In 1945 the team went down to second division for the first time, but next year All Boys won the Tercera de Ascenso championship after defeating Justo José de Urquiza 2-1. That season All Boys played 24 matches and scored 91 goals.

In 1950 there was a restructuring in Argentine football that sent many teams to the lower division, alleging that those institutions had their stadiums in poor conditions to host the Primera División matches. One of those teams relegated was All Boys. The following year All Boys won its second championship with a victory over Tiro Federal which brought "The Albo" back to Primera.

The first run on Primera División 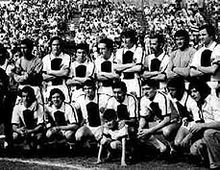 The 1972 team that won promotion to Primera División that year.

In 1972 All Boys hired José Paladino as coach. Under his command, the squad won 11 consecutive games (which remains as record nowadays for lower categories), obtaining 29/30 points. Therefore, on October 14, 1972, All Boys became Primera B champion defeating Excursionistas 1-0 with a goal scored by Benítez.

Some notable players of that team were Valentín Sánchez (top scorer), José Romero (proclamed as "the best player of the team") and Ángel Mamberto. After promoting to Primera, All Boys remained eight years in that division, achieving its best position in the 1974Torneo Nacional where finished 5th. All Boys also defeated Boca Juniors, River Plate, San Lorenzo, Independiente and Racing. In 1980 was relegated to Primera B.

When the Argentine football system was restructured, All Boys could not qualify amongst the 8 teams to dispute the Primera B Nacional, being relegated to play in the Primera B Metropolitana, which was one level lower.

For the 1992/3 season Mario Rizzi was hired as the team coach, and were incorporated some players such as Marcelo Blanco, Marcelo Yanino, Rubén Urquiza. The team made a great campaing, playing the decissive match against Defensores de Belgrano at Ferro Carril Oeste stadium, where 25,000 All Boys's supporters attended, which set a record of spectators for the lower categories in Argentine football. The Floresta team won its 4th championship, promoting to Primera B Nacional.

In 2001 the team was relegated to Primera B Metropolitana again. For 2002/03 season the club hired Ricardo Caruso Lombardi as coach. The team won 8 consecutive games and qualified to play the Torneo Reducido, which won but then lost promotion at the hands of El Porvenir. For the 2007/08 season the club incorporated Ariel Zárate, Hernán Grana and Gustavo Bartelt among other players came from different clubs. Former player José Romero was designed as coach. On May 6, 2008, All Boys won a new championship after the match vs. Atlanta, which "El Albo" won 2-0. This score also returned All Boys to Primera B Nacional.

During the 2009/10 season, All Boys qualified to play the Promoción in order to dispute a place in Primera División. All Boys defeated Rosario Central 3-0 in the "Gigante de Arroyito" after an 1-1 draw in Floresta, returning to Primera División after 30 years of being relegated to lower divisions. In 2010 Torneo Apertura, All Boys achieved victories over Independiente, Estudiantes de La Plata, River Plate, amongst others, finishing in the 8th position.

All Boys's classic rival historically has been Nueva Chicago. This rivalry is considered by many to be one of the most attractive outside of the First Division rivalries. It was born when these two teams played their first professional championship in 1937. This first match ended in a 4-4 draw. The second game had to wait until 1941, because the Torito (Nueva Chicago's nickname) had fallen to Primera C division in 1937 and returned only after 3 years. "Albo" won that match 3-1 in Nueva Chicago's home, Mataderos. From that time forward All Boys maintains the advantage in wins over Nueva Chicago, an advantage they have never lost. This rivalry has seen more than 90 official editions.

Another All Boys rival is Argentinos Juniors, but this is due to the proximity of the respective neighborhoods since most of the time they have played in different categories. These two institutions clashed officially on more than 60 occasions.

Leopoldo Rigoli gave the property between the streets Gaona Ave., Segurola, Morón and Sanabria. They built a roofed podium and five rooms for the players. In 1924 they settled in at Segurola Street No 1351 and opened its new stadium to play a friendly match against Temperley.

In 1937, when professionalism started, All Boys had their new stadium in the city block formed by the streets, Segurola, Indio (current Elpidio Gonzalez), Sanabria and Miranda, where they played until 1959.

On November 10, 1959, Law 14.934 was enacted, by which the national government donated the land to All Boys, located on Av. Jonte, between the streets Chivilcoy and Mercedes.

In 1963 the Islas Malvinas Stadium was inaugurated, in an encounter in front of Club Deportivo Riestra, in which the host team won so blunt. Upon the inauguration of the stadium had two side galleries.

The stadium has been refurbished several times, the most important work was the construction of a second tier on Mercedes street side. By the late 1980s the Islas Malvinas Stadium had a capacity of 12,000 spectators.

The stadium remained the same until mid-2004 when a group of people, linked to the All Boys club, managed to raise the necessary funds and build a cement platform on Miranda street, thus the capacity of the stadium was increased to 16,500.

In 2006 they dismantled the wooden planks by Chivilcoy street and on September 20 of that year they began construction of the new cement foundation. From January 2007 through July of that year a new set of stands was built. Finally the stadium's capacity increased to 18,000. 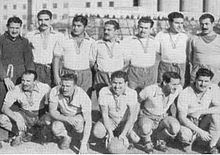 The 1950 team that won the Primera C championship that season.