/dɛlˈvæli/) is an unincorporated community in southeastern Travis County, Texas, United States. It is about 7 miles (11 km) miles southeast of Downtown Austin,[1] and is part of the Austin-Round Rock metropolitan area. The 2000 census estimates the population to be 300.[citation needed] 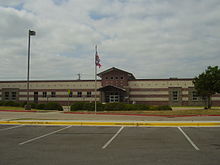 By the mid-1880s Del Valle had a school. In 1907 the area common school district had two schools, each with one teacher. One school had 108 black students, and one school had 9 white students. Throughout much of its history Del Valle was served by the Colorado Common School District Number 36 and the Hornsby-Dunlap Common School District.[1] In April 1963 the Colorado school district changed its name to the Del Valle Independent #910. In May 1967 the Del Valle district annexed the Hornsby-Dunlap district.[2]