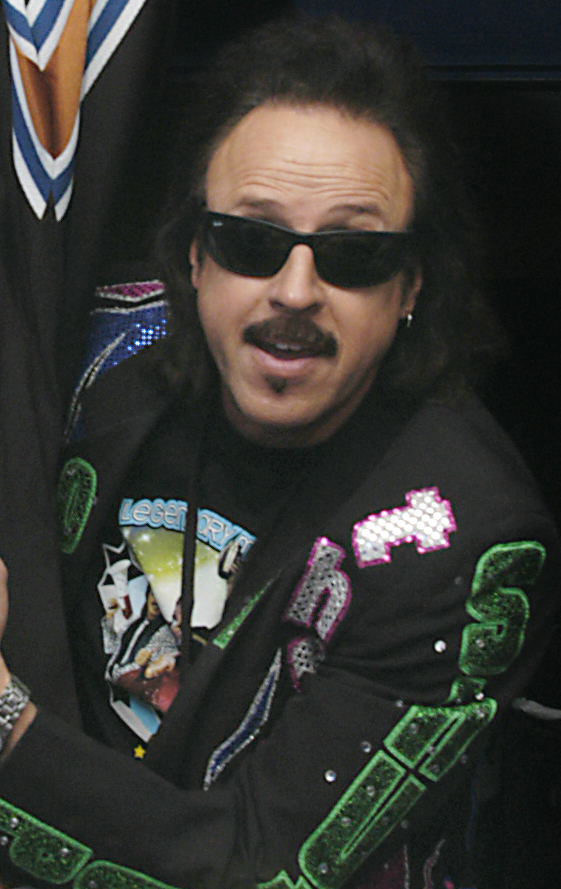 Jimmy Ray Hart (born , ) is a manager, executive, , and . He has worked in the World Wrestling Federation, , , , , , WrestleXpress, and . He has managed many notable professional wrestlers, including , , Jerry "The King" Lawler, , and .

Before wrestling, Jimmy was part of a band in the 1960s called who had a million selling record “Keep on Dancin”. Before becoming , there were known as just "The Gents". Their production manager told them that if they did not change their name, then they wouldn't succeed in the music industry. Later, after the leader of the group Larry Raspberry left, Jimmy took over and they had a few minor hits.

After being asked to sing back-up with Jerry "The King" Lawler, Jimmy was asked to be an announcer and then to manage Jerry. He also managed , "Ravishing" Rick Rude, , Jim "The Anvil" Neidhart, , Kamala, , and "Hot Stuff" Eddie Gilbert; this stable was known as "Hart's First Family of Wrestling", or simply "The First Family". After Lawler broke his leg, Jimmy brought in talent to take the title from Jerry. In 1982, Hart earned national headlines doing a program with comedian and television star . Hart, "The King," and Kaufman would continue this feud for over a year. Around this time, Hart became known as "The Wimp", a nickname given to him by Lawler and chanted by fans, and was the subject of the song "Wimpbusters", which was sung by Lawler to the tune of the popular hit "Ghostbusters" by ; a music video was also made featuring Lawler, announcer , and wrestlers such as Savage, Handsome , , , and Rufus R. Jones, along with footage of "The King" beating Hart and his "First Family" (a young Brian Christopher also made an appearance as a young child and another youth is seen wearing a replica of 's West Texas State football jersey). Then in 1983 and 1984, Hart led , Masao Ito, and Gilbert to CWA/AWA International titles. After this success, Hart was hired by the WWE/WWF, shortly after he was given his trademark megaphone, thus giving him the name "The Mouth of the South".

While in the WWF, Jimmy managed many wrestlers. His first acquisition was Greg "The Hammer" Valentine in 1985, then the Intercontinental Champion. At WrestleMania, Hart managed as he defeated S.D. ("Special Delivery") Jones, allegedly in 9 seconds. Jimmy Hart would later trade King Kong Bundy's contract to Bobby “The Brain” Heenan for The Missing Link and .

Also in 1985, Jimmy managed Jim "The Anvil" Neidhart. After Valentine lost the Intercontinental Title to , Hart briefly co-managed the Dream Team (Valentine & Beefcake), until he was phased out and gave full control to "Luscious" Johnny Valiant. In 1986, Hart took the Funk Family under his wing. The Funks included Terry, Hoss, and "brother" Jimmy Jack Funk. Then, Jimmy managed and helped him establish the gimmick of “Adorable” Adrian Adonis. That year also marked the appearance of Bret "The Hitman" Hart; Jimmy teamed him up with Jim "The Anvil" Neidhart to form .

On January 26, 1987, Hart guided the Hart Foundation past the for the WWF World Tag Team titles. Hart led the Hart Foundation and former referee Dangerous Danny Davis over the and Tito Santana at in the in . When The Honky Tonk Man turned heel, Hart became his manager. called Hart “The Colonel” in a reference to Tom Parker, the manager of . With Hart in his corner, The Honky Tonk Man captured the Intercontinental title from Ricky "The Dragon" Steamboat on June 2, 1987 in Buffalo, NY .

Later in 1987, Hart was named 's Manager of the Year, an award he won again in 1994. Also in 1987, Jimmy Hart managed the WWF Women’s Tag Team champions Judy Martin & , known as . At , Jimmy Hart received a haircut from Brutus “The Barber” Beefcake. When Jimmy dropped the Hart Foundation in 1988, Hart managed to feud with his former team; the angle was that Hart still retained the managerial rights to his former team and gave it to the Rougeaus, giving them the right to appear at ringside whenever the Harts wrestled. At SummerSlam 1988, Jimmy Hart accompanied Demolition & Mr. Fuji to help retain their WWF Tag titles against the Hart Foundation. Ax used Hart's megaphone as a foreign object to strike Bret and secure the victory. The Megaphone became a significant trademark of Hart's throughout the years and was extensively used as a foreign object by the wrestlers he managed and by himself. In 1989, Hart brought into his stable after the departure of Frenchy Martin. Then at a push-up contest between the Ultimate Warrior and Bravo, Jimmy and Dino invited a large 460 pound man from the audience into the ring to sit on the contestants' backs. That large man would later be known as Earthquake, and Jimmy groomed him to be the man to beat Hulk Hogan for the WWF title.

In 1990, Hart managed the short-lived team Rhythm and Blues ( and Greg "The Hammer" Valentine) to feud with his former tag team, the Hart Foundation. He also managed The Mountie, .

On March 24, 1991, Hart led the Nasty Boys past the Hart Foundation for the WWF World Tag Team titles at in Los Angeles, CA. Hart added another tag team to his stable, (Earthquake and Typhoon), but Hart turned on the Natural Disasters to manage Money Incorporated ("The Million Dollar Man" Ted DiBiase and IRS). Hart took Money Inc. to two WWF World Tag Team title reigns. In 1992 The Natural Disasters got their revenge on Jimmy, but their reign was short. Hart also managed , in a short lived I.C championship reign in early 1992. When was wrestling in the WWF, Hart would occasionally manage him at house shows when and had commitments elsewhere. This was apparently at the request of , who was programmed with Flair at the time and knew Hart would be more than willing to for him. This later led to a close working relationship between Hogan and Hart.

Also in 1992, Hart lost due to his ties with Money Inc. because they felt he was not helping them and was only focusing on his champions. Finally in 1993, Hart managed and Brutus "The Barber" Beefcake after he came to the aid of Beefcake following an attack by Money Inc. At , Jimmy Hart managed the Mega Maniacs, Hulk Hogan & Brutus "The Barber" Beefcake, who lost to Money Inc. by disqualification. After being disqualified, Hogan and Beefcake were going to "beat up" the ref. Jimmy told them not to do it and stepped in. He grabbed the ref, and tossed him outside of the ring. Jimmy Hart, Hogan, and Beefcake then stood in the ring and taunted, while Hogan's theme song "Real American" played. Later that night, Hulk Hogan returned to defeat Yokozuna for the WWF title. At King of the Ring 1993, Hart was in Hulk Hogan's corner as he lost the WWF title back to Yokozuna. This would be Hart's last WWF appearance, as both he and Hulk Hogan departed the company.

Following their departure from the WWF, Hogan and Jimmy briefly toured Japan. After their return, Jimmy wrote music and occasionally appeared on Hogan's television show, "". Hulk Hogan then had Jimmy manage him when they went to WCW. At Bash at the Beach 1994, Hart managed Hulk Hogan to win his first WCW World title by defeating “The Nature Boy” Ric Flair.

At Halloween Havoc 1995, Jimmy Hart, longtime manager and friend to Hulk Hogan, turned on Hogan to help The Giant. By doing that, Jimmy Hart would become the manager of the evil faction, The , created by Kevin Sullivan. Members included Hugh Morrus, The Barbarian, Meng, Kevin Sullivan, , and The Giant. After the demise of the Dungeon of Doom, Hart created The First Family: , , The Barbarian, and Hugh Morrus. After the demise of the First Family, Hart was placed in charge of booking TBS' show prior to the program's cancellation. At Spring Stampede 2000, Hart faced radio personality Mancow. The two had a rematch later in the year at Mayhem. In February 2001, Hart joined WCW's booking committee.

In 2003, Hart restarted his feud with Jerry Lawler by buying, for the XWF, part of the upstart promotion. Hart is now Lawler's manager.

On , 2005 at Slammiversary, were assisted in a title defense against Team Canada by Hart, who ran to ringside and threw his to , who hit with it and pinned him. Hart acted as the manager of The Naturals until , 2005. Hart was never under contract to TNA, or any wrestling organization for that matter and his schedule meant that he could no longer devote the time needed to help TNA.

He is used when needed by WWE to do special appearances and recently appeared in Florida Championship Wrestling as Commentator.

*Signature foreign object
**: It was given to him by who had just returned from touring Japan. McMahon told him that from then on he had to carry it to ringside with him. To this day, it has been associated with Hart's gimmick.

*World Class Wrestling Association:*Inductee into the WCWA Hall of Fame on October 6 2006

Hart composed many theme songs for wrestlers in the WWF and WCW. Some of the wrestlers for whom he composed music were Honky Tonk Man, , Brutus "The Barber" Beefcake, the Fabulous Rougeaus, Dusty Rhodes, the Legion of Doom, the Nasty Boys, the Mountie, Hulk Hogan, the nWo Wolfpac, and . One of Hart's most notable compositions is 's entrance theme, "Sexy Boy."

In the late 1980s, Jimmy Hart released a music album (also available on cassette tape) entitled "Outrageous Conduct". The release consisted of comical songs done in character; such as "Barbara Streisands Nose" and "Eat Your Heart Out Rick Springfield". The LP/tape has become very rare and has sold for up to $200 on ebay. A cd-r copy of the release has circulated in trading circles in recent years.

Since the demise of WCW, he became a part owner and one of the founders of the (XWF) along with Greg “The Hammer” Valentine & . He also played a key role behind the scenes in the British based WrestleXpress promotion. He had an administrative position in TNA and was seen from time to time at Universal Studios promoting .

In 2005, Jimmy Hart was included in the video game "" as a playable legend who can be unlocked for use in Exhibition. [http://en.wikipedia.org/wiki/WWE_SmackDown!_vs._RAW_2006]

In September 2007, Hart appeared on an episode of "" as a witness for a defendant.

Hart is a close friend of Hulk Hogan, and is featured on many episodes of Hogan's reality series, "".

Jimmy has been married to his wife Michelle Lamerely since January 1, 1970 (his 26th birthday) and they have four children and one grandchild.Fact|date=May 2008