Discovery Communications, Inc. (DCI) (NASDAQ: DISCA, NASDAQ: DISCB, NASDAQ: DISCK) is an American global media and entertainment company. The company started as a single channel in 1985, The Discovery Channel. Today, DCI has global operations offering 28 network entertainment brands on more than 100 channels in more than 180 countries in 39 languages for over 1.5 billion subscribers around the globe.[1] Discovery Communications is based in Silver Spring, Maryland. 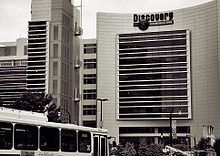 Judith McHale was President and Chief Executive Officer until NBC Universal executive David Zaslav took over the position on November 16, 2006.[2]

In addition to Zaslav, current executives include:[3]

Prior to September 18, 2008, DCI's ownership consisted of three shareholders:

The company started out with just a single channel, Discovery Channel, launched in 1985. In 1991, they acquired their rival The Learning Channel.

In the mid-90s, Discovery Communications started developing several new networks. The first of these to launch was Animal Planet, which was launched in cooperation with the BBC in 1996. In October 1996, four digital networks were launched to take advantage of the then-new digital cable space; Discovery Kids, Discovery Travel & Living Network, Discovery Civilization Network and Discovery Science Network.[6] This was followed by the 1998 launches of Discovery Wings Channel and Discovery Health Channel.

They also bought the Travel Channel in 1997, CBS Eye on People (became Discovery People) in 1998 and The Health Network (became FitTV) in 2001.

Starting in the middle of the 2000s, Discovery have been reviewing and overhauling most of their "digital" networks.[7] The networks have evolved from being offshoots of the Discovery Channel, into separate entities with their own identities. The "Discovery" moniker has gradually been dropped from channel names. Some networks had kept the globe in their logo to signal their affiliation to Discovery Networks, but this practice has also been gradually discontinued.

The division's channels include:

Discovery Networks International, or Discovery international networks, offers "a portfolio of channels, led by Discovery Channel and Animal Planet, that are distributed in virtually every pay-television market in the world." The division offers over 100 separate feeds in 39 languages with "channel feeds customized according to language needs and advertising sales opportunities."[11]

DCI owns most channels offered by Discovery Networks International, with the exception of:

"As with the U.S. networks division, the international networks operate web sites and other new media businesses."

On January 10, 2006, the Discovery Networks International announced a joint-venture with Spiegel TV and DCTF to provide global free-to-air television to more than 20 million households in Germany and neighboring countries.[12]

The division's channels include:

Discovery Commerce operates a catalog and electronic commerce business[16] offering lifestyle, health, science and education-oriented products, as well as products specifically related to programming on Discovery's networks. In addition, the e-commerce site serves as a licensing business that licenses Discovery trademarks and intellectual property to third parties for the purpose of creating and selling retail merchandise. The Discovery shopping website offers products similar to those previously sold in the Discovery Channel retail stores. Recently the Discovery Channel retail stores were closed,[when?] however, the products are still available online.

Discovery Education also sells DVD, VHS, CD-ROM, and Multimedia kits with the same content. Other products include COSMEO, an online homework subscription help site, Discovery Health Connection, Discovery Science Connection and they recently purchased other video streaming companies. They have two free services. One is their website, Discovery School and the other is a teacher community, the Discovery Educator Network, commonly referred to as the DEN[citation needed].

Discovery Communcations currently operates Petfinder.com (acquired in November 2006), TreeHugger.com (acquired in August 2007),[17] and HowStuffWorks.com (acquired on October 15, 2007 for US$250 million[18]), under their "Discovery Digital Media" business unit. The company later chose to use the name HowStuffWorks as the title of a television series on Discovery Channel. The series, which focuses on commodities,[19] premiered in November 2008 and is similar in style and content to other "how it works" programs like Modern Marvels.[20]

On March 17, 2009, Discovery revealed that it owned the rights to several patents related to e-books, in announcing a patent infringement lawsuit against Amazon.com, maker of the Kindle e-book reading device. The patents were originally developed by the company's founder John Hendricks; the specific patent in question in the suit was applied for in 1999 but issued in late 2007.[21][22]

On April 30, 2009, it was announced that Discovery would be forming a joint-venture with Hasbro to re-launch Discovery Kids as a new children's channel known as The Hub.[23][24]

Discovery launched a 3DTV channel in conjunction with Sony and IMAX in early 2011, called 3net. [26]

On September 1, 2010, the DCI headquarters was the site of a hostage taking, a lone gunman identified as James J. Lee took hostages inside of the Discovery Communications headquarters in Silver Spring, Maryland, prompting an evacuation of the building. The gunman made his manifesto on his website SaveThePlanetProtest.com with several demands. Lee was shot dead by police and the hostages were released safely.[27] James J. Lee had previously been arrested in 2008 while protesting in front of the same site.