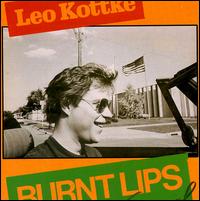 "Burnt Lips" is a 1978 album by American guitarist . It includes two selections from the soundtrack of 's film . Only one is heard in the movie; an abbreviation of "The Train and the Gate". The album was recorded by Kottke in his home using Sound 80 Studio's mobile recording unit.

It peaked at #143 on the Billboard Pop Albums charts.

Although Kottke did not release an album in 1977, he produced and played on "The Wylie Butler" by Cal Hand (Takoma TAK C-1056), a Minneapolis pedal steel and dobro player who had played on numerous Capitol releases for Leo.

All songs by Leo Kottke except as noted.