Zabranjeno Pušenje (Serbo-Croatian for No Smoking) is a Yugoslavian garage rock band from Sarajevo, closely associated with the New primitivism cultural movement and the radio and television satire show Top Lista Nadrealista. They were one of the most popular musical acts of the 1980s in Yugoslavia, selling hundreds of thousands of records.

The band was formed in 1981 in Sarajevo by a group of friends who worked on the early radio version of Top Lista Nadrealista. Contrary to the then-prevalent punk rock and new wave, Zabranjeno Pušenje created a distinctive garage rock sound with folk influences, often featuring innovative production and complex story-telling, sometimes even dark premonitions of war. They went on to record four albums and tour the country extensively, occasionally sparking controversy and even getting into trouble with authorities for their (usually mild and sympathetic) criticism of the socialist system, and the habit of making light of issues considered sensitive at the time.

After the band's popularity reached new heights in late 1980s, spurred on by the televised version of Top Lista Nadrealista, the Bosnian War which followed saw the breakup of the band, with one offshoot continuing work in Belgrade initially as Zabranjeno Pušenje, later under the name No Smoking Orchestra, and the other in Zagreb, using the original name. Nevertheless, many of the songs of Zabranjeno Pušenje have attained an anthemic status and their music remains popular across former Yugoslavia. 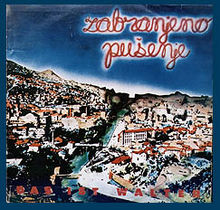 Zabranjeno Pušenje was founded by a group of friends who attended Druga Gimnazija and lived in Fuad Midžić Street in the Sarajevo suburb of Koševo. The band they formed was called Pseudobluz bend (Pseudo-blues band). All members were involved in the radio show Top Lista Nadrealista, so they already had stage names. The original line-up consisted of Nenad Janković ("Dr. Nele Karajlić"; vocals, keyboards), Davor Sučić (aka "Sejo Sexon"; guitar), Zenit Đozić (aka "Fu-Do"; drums), Mustafa Čengić (aka "Muče" or "Mujo Snažni"; guitar), Mladen Mitić (aka "Munja"; bass guitar) and Ognjen Gajić (aka "Ogi"; saxophone, flute).

They were occasionally accompanied by Mirko Srdić (aka "Elvis J. Kurtović") as a guest, since he had his own band, "Elvis J. Kurtović & his Meteors". They soon started calling themselves "Pseudobluz bend Zabranjeno Pušenje", and after some time simply dropped the first part. Their first recording, "Penzioneri na more idu zimi" (Retirees Take Their Vacation In Wintertime), was made for Radio Sarajevo in early 1981.

They performed around Sarajevo for two years before recording their first album Das ist Walter in June 1984, for Jugoton label. The line-up was altered and now Nenad Janković's younger brother Dražen Janković (aka "Seid Mali Karajlić") was on organ and Predrag Rakić (aka "Šeki Gayton") took drums. Although it was publicized that Nenad Janković and Davor Sučić wrote the first album material, the fact is that Mustafa Čengić (lead guitar) and Mladen Mitić (bass guitar) were unpublished composers of a large portion of it, and also greatly influenced and contributed to all song arrangements. The album was initially released in 3000 copies, but the final count was 100,000 copies sold, setting a record for exceeding the initial release by 30 times. In autumn 1984 they embarked on a 60-concert nation-wide tour, making them one of the biggest Yugoslav rock attractions after just one album. 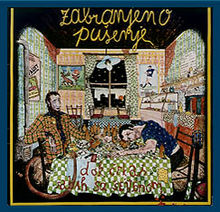 During that tour, at their concert in Rijeka (on November 27, 1984), Karajlić declared, referring to an amplifier that had just broken down, "Crk'o Maršal. Mislim na pojačalo." ("Marshall croaked. I mean, the amplifier."), making a pun on Marshal Tito's death, landing the band in trouble. They were criticized by the media and a campaign against them resulted in the canceling of their concerts and the removal of Top lista nadrealista from the air.

In this atmosphere, the band recorded their second, double album Dok čekaš sabah sa šejtanom (While you wait for dawn with the Devil)in the infamous SIM studio and released it in July 1985. Songs were written by Mustafa Čengić, Sejo Sexon, Nele Karajlić, Mladen Mitić, Seid Mali Karajlić and Elvis J. Kurtović. The album was solid, but was boycotted by the media and the following tour had a rather disappointing conclusion as the following year Šeki Gayton and Mustafa Čengić (Muče) left the band in search of a more secure means of making a living. Mladen Mitić left in late 1986 after contributing to the development of the third album. 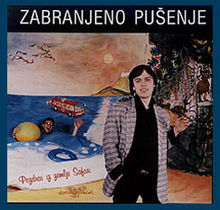 For the occasion of the recording of their third album, Pozdrav iz zemlje Safari (Greetings from the Safari land) released in 1987 by Diskoton, the rest of the band was joined by Predrag Kovačević (aka "Kova" or "Kowalski"; from "Elvis J. Kurtović & his Meteors") on guitar, Faris Arapović on drums and Emir Kusturica played the bass guitar on 3 tracks. All songs were written by Sejo Sexon and Nele Karajlić.

Kusturica co-authored two songs. Diskoton censors had some objections and the song "Our Proposal for the Eurovision Song Contest" had to be renamed, since the song included comments on the depressed state of the economy and the lack of freedom of expression. The album again included a number of hit songs and returned the band to stardom. The following tour, which included 87 concerts, was the largest Zabranjeno Pušenje tour thus far and the band was by that time regarded as one of the Yugoslav rock institutions. In January 1988 the band received a gold record for 100,000 copies sold. 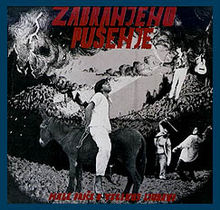 In October 1988 the band released their last album before splitting up - Male priče o velikoj ljubavi (Small Stories About Great Love). The songs were mostly written and produced by Sejo Sexon. For this album, Jadranko Džihan (aka "Dinka") played keyboards and Darko Ostojić (aka "Minka") was on bass guitar. The album also featured opera singer Sonja Milenković, violin player Dejan Sparavalo and Goran Bregović as backing vocal and guitar player. The album was an average success. The band embarked on the tour with Bombaj štampa and the rest of Top lista nadrealista crew (those who didn't play in the band already). The tour (a combination of theatre and rock and roll, after an idea by Sejo Sexon) was a great success and regarded as the best tour of 1989 with around 60 concerts and more than 200,000 visitors.

In the early 1980s, when the rest of the ex-Yugoslav popular music scene followed the trends of early 1980s Europe, (chiefly punk rock and new wave), Zabranjeno Pušenje were part of a unique rock movement centered in Sarajevo that forged its own path. This movement, for the most part, centred on simple, youthful, garage rock, with folk influences and a distinctive Sarajevo urban feel called Novi primitivizam (New primitivism).

The songs range from punk to rock, quite frequently arranged to feature trumpets and saxophones, adding to the unique sound of the band, along with many samples and soundbites from the period. Zabranjeno Pušenje captured the feel of Sarajevo, its idols and local heroes along with tales of love and loss, in a distinctive and often humorous way. Very visual and cynical, the band's lyrics were progressive enough to show the last stages of Yugoslav socialism (songs "Dan republike", "Srce ruke i lopata", "Abid", "Guzonjin sin"), alternate clubs and gays ("Pišonja i Žuga u paklu droge", "Javi mi") as well as providing morbid hints for the upcoming war ("Kanjon Drine", "Zvijezda nad Balkanom"). Their youthful energy and awareness of their surroundings made Zabranjeno Pušenje much more than the sum of its parts, a band that seemed able to record a great song with ease.

Great songs such as Nedjelja kad je otišao Hase (The Sunday Hase Left; the song is a tribute to Asim Ferhatović Hase).

Other songs on the album were:

They have secured their place in the history of ex-Yugoslav rock music. The band released four albums before the ensuing war forced most of the members to relocate.

On several occasions from 1987 until the breakup of the band, Emir Kusturica played bass guitar in the band.

The war situation during the breakup of Yugoslavia took a toll on the band. Nenad Janković (himself a Serb) fled to Serbia and reformed "No Smoking Orchestra" in Belgrade. Sejo Sexon and rest of group took new member Saša Petrović ("Čabarabdić" from "Audicija"), during the war in Bosnia, started war version of "Top Liste nadrealista", first like radio version on Radio BIH, later also TV serial.

The western part continued to perform in 1996 and has recaptured some of the group's success. They also later went to a European tour and by 2004 had released five new albums (three studio and two live albums). In 2006 the band created the complete soundtrack for the Bosnian movie Nafaka with guest musicians (mostly actors from the movie, as well as the female choir Arabeske). Later that year, the band released the double album Hodi da ti čiko nešto da, their first double album since Dok čekaš sabah sa šejtanom. They are currently on tour, promoting a new album with concerts in Bosnia and Herzegovina and Croatia.[dated info]

In 2006 they returned to Belgrade and played a successful concert at the Beer Fest.

The No Smoking Orchestra (Belgrade)

Emir Kusturica and The No Smoking Orchestra 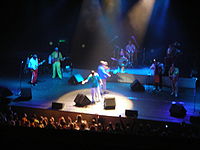 The No Smoking Orchestra at concert in BKZ Oktyabrskiy St. Petersburg, Russia, 6 October 2007

The eastern part released one new album as Zabranjeno Pušenje - 1997's Ja nisam odavle. In 1999 the band was then renamed Emir Kusturica & No Smoking Orchestra and released four more albums and continued touring all around the world. In 1998 the band composed the music for Emir Kusturica's film Black Cat, White Cat, which won the Silver Lion at the Venice Film Festival the same year. Since June 1999, the band has been regularly touring worldwide. They developed quite a following internationally in the process. Their popularity is particularly notable in Southern Europe (Italy, Portugal, Spain, and France) where most of their initial touring took place in late 1990s and early 2000s and in Latin America where the band first played in 2001, gradually developing a spirited fan base throughout the continent, especially in Argentina. Lately, the band has also fond much success deep into Eastern Europe (Russia, Ukraine, Belarus, and Armenia).

Although they enjoy success worldwide, at home in Serbia their new ethno sound received a lukewarm reaction as many of the band's longtime fans had trouble accepting the shift towards ethno/folk/gypsy sound. During the first homecoming with the new sound in early July 2004, the band was essentially forced off stage at the large open-air concert at Belgrade's Ušće Park by agitated fans who pelted the stage with plastic water bottles only 40 minutes into the set.[citation needed] The concert that attracted a large crowd of 40,000 fans also had Riblja Čorba on the bill and was conceptualized as a joint anniversary of sorts - 20 years since Zabranjeno Pušenje released its debut album and 25 years since Riblja Čorba did the same. However, despite being announced and promoted as a "Zabranjeno Pušenje" gig, the band haven't played a single song from the Zabranjeno Pušenje era during the first 40 minutes - choosing instead to go with the No Smoking Orchestra material - all of which prompted the fans' aggressive reaction.

In 2005, a DVD live album Live is a Miracle of the band's performance in Buenos Aires' Luna Park was released.

In 2007, the band was involved in Time of the Gypsies punk opera that was staged in Bastille in Paris.

Since the Ušće fiasco, the band played only a few more concerts on home soil such as 2008 large open-air gigs in Kruševac and Novi Sad that went well, serving as lead ins for the concert at Belgrade Arena in late November 2008 where more than 10,000 gathered.

Though the band played Montreal twice before, summer 2010 marked their first foray into North America with concerts in Toronto, Montreal, Quebec City, Chicago, and New York City. The highlight of the mini-tour was the outdoor concert in the streets of Montreal in front of some 60,000 spectators as part of the city's jazz festival (Le Festival International de Jazz de Montréal).

Many other musicians have appeared on various albums in large and varying setups.