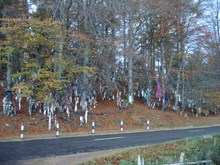 Offerings at the clootie well near Munlochy, on the Black Isle, Easter Ross

Clootie wells (also Cloutie or Cloughtie wells) are places of pilgrimage in Celtic areas. They are wells or springs, almost always with a tree growing beside them, where strips of cloth or rags have been left, usually tied to the branches of the tree as part of a healing ritual. In Scots nomenclature, a "clootie" or "cloot" is a strip of cloth or rag. 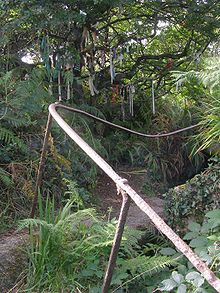 When used at the clootie wells in Scotland and Ireland, the pieces of cloth are generally dipped in the water of the holy well and then tied to a branch while a prayer of supplication is said to the spirit of the well - in modern times usually a saint, but in pre-Christian times a goddess or local nature spirit. This is most often done by those seeking healing, though some may do it simply to honour the spirit of the well. In either case, many see this as a probable continuation of the ancient Celtic practice of leaving votive offerings in wells or pits.[1][2]

There are local variations to the practice. At some wells the tradition is to wash the affected part of the body with the wet rag and then tie the washing-rag on the branch; as the rag disintegrates over time, the ailment is supposed to fade away as well. At some wells the clooties are definitely "rags" and discards, at others, brightly-colored strips of fine cloth. In some locations the ceremony may also include circumambulation (or circling) of the well a set number of times and making an offering of a coin, pin or stone. Additional votive offerings hung on the branches or deposited in the wells may include rosaries, religious medals, crosses, religious icons and other symbols of faith.[1][2]

At clootie wells where the operative principle is to shed the ailment, and the clootie is thought to represent the ailment, the "offerings" may be grotesque castoffs. Those that instead view the clootie as an offering to the spirit, saint or deity are more likely to tie an attractive, clean piece of cloth or ribbon.[1][2]

The sacred trees at clootie wells are usually Whitethorn trees, though Ash trees are also common.[1][2]

The most popular times for pilgrimages to clootie wells, like other holy wells, are on the feast days of Saints, the Pattern or Patron day, or on the old Gaelic festival days of Imbolc (February 1), Beltane (May 1), Lughnasadh (August 1), or Samhain (November 1).[2][3] 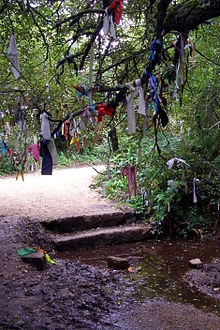 Cloths tied to a tree near Madron Well in Cornwall

In Scotland, near the villages of North Kessock, Munlochy and Tore one mile west of Munlochy on the A832, is a clootie well at an ancient spring dedicated to Saint Curidan (or Curitan), where rags are still hung on the surrounding bushes and trees. Here the well was once thought to have had the power to cure sick children who were left there overnight. Craigie Well at Avoch on the Black Isle has both offerings of coins and clooties. Rags, wool and human hair were also used as charms against sorcery, and as tokens of penance or fulfilment of a vow.[4]

A fictional clootie well at Auchterarder and the one on Black Isle feature in Ian Rankin's novel The Naming of the Dead.Author Ian Rankin visited the Clootie Well at Munlochy, on the Black Isle before writing the book.