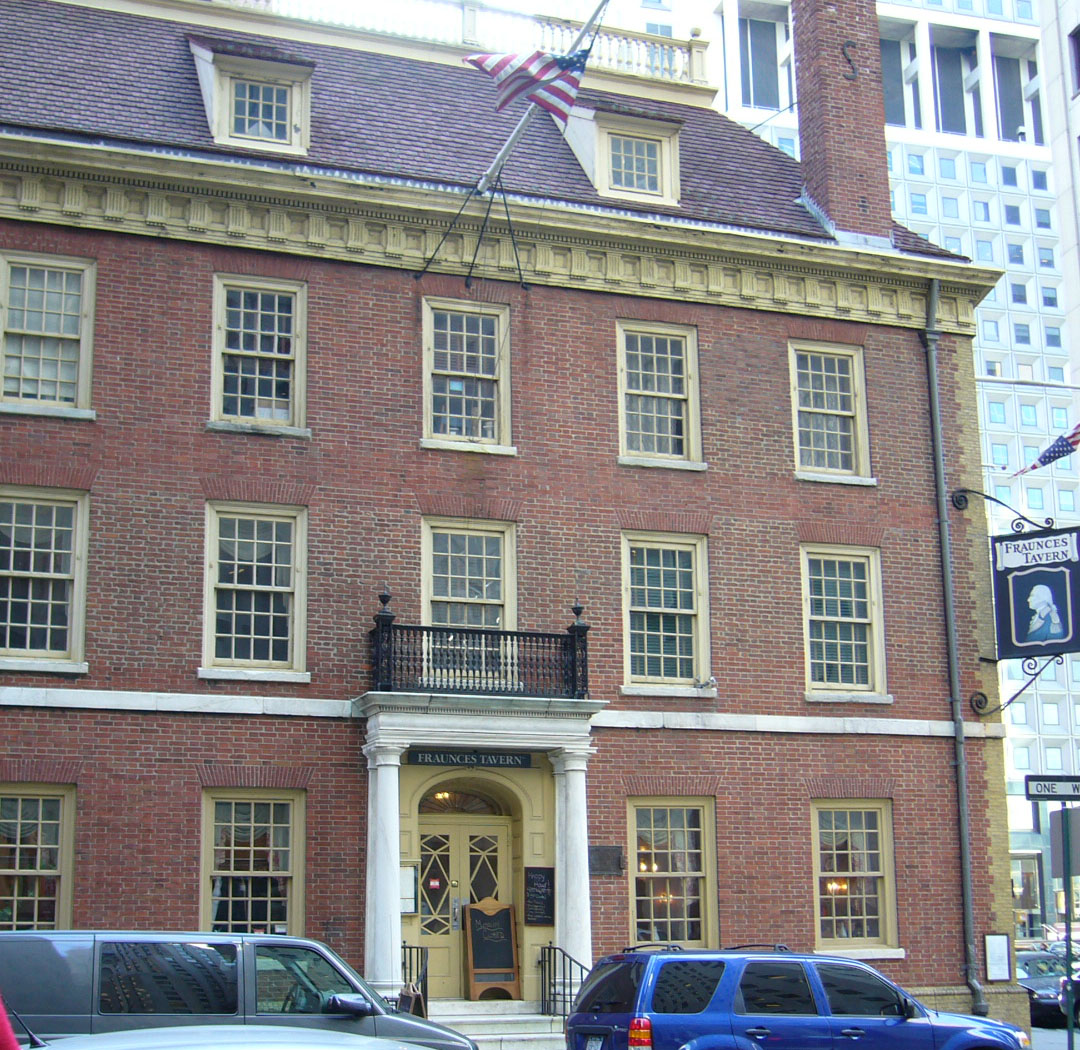 Fraunces Tavern is a restaurant and museum in lower , . It was built on the site of a former building which played a significant role in pre-Revolutionary activities, and in which, on , General bade farewell to his officers at the end of the Revolution, before returning to his home, . The Fraunces Tavern Block, bounded by Pearl, Water, Broad Streets and Coenties Slip, was listed on the in 1977, while the Fraunces Tavern building was not separately listed until 2008.

The building housing Fraunces Tavern, at 54 Pearl Street at the corner of Broad Street [ [http://memory.loc.gov/cgi-bin/query/r?ammem/hh:@field(NUMBER+@band(NY0975)) American Memory from the Library of Congress] ] , near South Ferry, is considered by the museum to be 's oldest surviving building. However, an extensive renovation was completed in 1907 under the supervision of . The result has been characterized as "a highly conjectural reconstruction&mdash;not a restoration&mdash;based on 'typical' buildings of 'the period', parts of remaining walls, and a lot of guesswork." ["AIA Guide to New York City", Fourth Edition, 2000, pg 15]

The original Fraunces Tavern was built as a house in 1719 for , a member of the prominent Delancey family that contended with the Livingstons for leadership in colonial New York. Etienne's heirs sold the house to in 1762, who turned it into one of the most popular taverns of the day. Though it is best known as the site where Washington bade farewell to the officers of the Continental Army in 1783, the tavern also played a significant role in pre-Revolutionary activities. Much of the Revolutionary history of New York revolved around Fraunces Tavern. It was one of the meeting places of the in the pre-war years.

During the tea crisis of 1765, a British captain who tried to bring tea into New York was forced to give an apology to the public at Fraunces Tavern. The patriots, dressed as Indians (like the participants in the subsequent ) then dumped his tea into the harbor.

In August of 1775, Americans took possession of cannons from the Battery at the tip of Manhattan and exchanged fire with the . They retaliated by firing a 32-gun broadside on the city, sending a cannon ball through the roof of Fraunces Tavern. When the war was all but won, Fraunces Tavern was used as the site of "Board of Inquiry" meetings, a procedure agreed upon between the withdrawing British commander, Sir Guy Carleton, and the American commander, George Washington, to appease the insistence of the American leadership that no "American property" (meaning former slaves emancipated by the British in return for military service) be allowed to leave with British forces. Every Wednesday, from April to November, 1783, the British-American Board of Inquiry met to vet the veracity of the paper credentials and oral history given by freed Blacks. However, British representatives were successful in ensuring all but a handful of the thousands of Loyalist Blacks then in New York, maintained their liberty under the protection of the British Crown, avoiding a return to slavery as desired by the Continental Congress. [Simon Schama, "Rough Crossing: The Slaves, the British, and the American Revolution" (New York, Harper Collins, 2006), at pages 151-2]

When the victorious Americans re-occupied the city, it was Fraunces Tavern that hosted Washington and his officers in a victory banquet. On Dec. 4, 1783, Washington was again at Fraunces Tavern to say farewell to his officers in the Long Room. Saving America from the fate of many republics that turned quickly to military dictatorship, Washington resigned his post and returned to civilian life until chosen first President of the United States(George Washington).

After the war, the tavern housed some offices of the as the country struggled under the . With the establishment of the and the inauguration of Washington as president in 1789, the building housed the departments of Foreign Affairs, Treasury and War. The offices were moved when the capital was moved from New York to Philadelphia.

The tavern operated throughout much of the 19th century, but suffered several serious fires beginning in 1832. Having been rebuilt several times, the structure's appearance has changed to the extent that it is not reliably known what the original 18th century restaurant looked like. In 1890 the first floor exterior was remodeled and the original timbers sold as souvenirs.

The much-changed original building was threatened in 1900 with demolition by its owners, who wanted to tear it down for a parking lot. A number of patriotic groups, notably the , worked to preserve it. The City of New York used its power of and designated the building as a park, a designation which was rescinded when the title was acquired by the Sons of the Revolution in the State of New York in 1904. An extensive reconstruction took place soon afterward.

On , a exploded in the building, killing four and injuring more than 50. The Puerto Rican nationalist group FALN, which had set off other s in New York City, claimed responsibility. No one was ever prosecuted for the bombing.