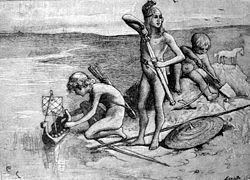 The sons of Mannus as depicted by Carl Larsson for Fredrik Sander's 1893 edition of the Poetic Edda. Woodcut by Justus Peterson.

Mannus is a Germanic mythological figure attested by the 1st century AD Roman historian Tacitus in his work Germania. According to Tacitus, Mannus is the son of Tuisto and the progenitor of the three Germanic tribes Ingaevones, Herminones and Istvaeones.

The name of this deity means human or man (as in Homo sapiens). It stems from the same root as the Indo-Iranian Manu, progenitor of humanity, first holy king to rule this earth who saves mankind and the Vedas and the priesthood from the universal flood.

This deity shares his name with the 20th rune of the Elder Futhark. It appears in the 3rd ætt or family of the futhark, along with such other "god-runes" as Tiwaz and Ingwaz. It has been suggested[citation needed] that this aett reflects the "ancient hymns" as sung by the Iron Age Germanic peoples, in which Mannus is mentioned.

In the Eddas, Mannus seems to most closely resemble Heimdall (World's Brightness). In the opening passage of the Voluspa, men are referred to as being Heimdall's kin, while in the poem Rigsthula he is shown uniting each of the hierarchal ranks in siblinghood. Furthermore, while Mannus is remembered as being the father of both Odin and Frey, Heimdall is remembered as being one of the Aesir, but also to have qualities directly linked to the Vanir and to exist in a close paternal relationship to Freyja.

In Eddaic Creation, Mannus is comparable to Borr.

Finally, given his relationship to Tuisco, and their mutual association with the founding of the Germanic peoples, it is possible that both Tuisco and Mannus are those deities alluded to at the end of the Little Voluspa; ushering in the new age according to patterns laid down in the past.

The names of the three sons of Mannus can be extrapolated as Ing, Irmin, and Istaev aka Iscio. Some identify the sons as Freyr (aka Yngvi) and Thor and Odin (aka Jormun) of the Icelandic Eddas.[citation needed]