No More Lies (Doctor Who audio)

No More Lies (Doctor Who audio) 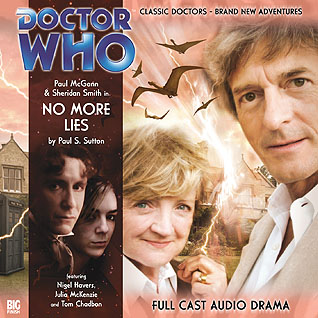 "No More Lies" is an audio drama based on the long-running British science fiction television series "". This audio drama was produced by and was broadcast on on .

The Doctor and Lucie follow the criminal time traveller Nick Zimmerman to a decaying spaceship in the Time Vortex, where he is planning to sell time travel technology to the highest bidder. After espacing the Tar-Modowk, aliens who have been attracted to the ship, they chase Dr. Zimmerman to a , where Dr. Zimmerman appears to have aged 30 years. The Doctor guesses that the party is in a , and confronts Zimmerman, only to learn that Zimmerman has settled down, married a woman called Rachel and rejected a life of crime. The Doctor informs Zimmerman that he must close the loop before the Tar-Modowk enter the real universe, but Zimmerman refuses as his time loop is the only thing keeping Rachel alive. The Tar-Modowk, riding Vortisaurs, break through into the universe and begin killing guests, so Zimmerman agrees to close the loop. Rachel dies, but before The Doctor leaves, The Headhunter appears and kidnaps Lucie.

* The play includes an original song, "Bucimeana", with music by Tim Sutton and lyrics by Paul Sutton from a traditional Hungarian poem. The song is sung by , who plays Rachel Zimmerman.