Torquay is a township in Victoria, Australia, which faces Bass Strait, 21 km. south of Geelong and is the gateway to the Great Ocean Road. It is bordered on the west by Spring Creek and its coastal features include Point Danger and Zeally Bay. At the 2006 census, Torquay had a population of 6,695.[1]

Wathaurong Aborigines occupied the area before white settlement, with picnickers beginning to frequent the area from the 1860s.[2] The area was settled as Spring Creek in 1871, after the watercourse along the south-western edge. In 1880 more settlers moved to the town, and it was renamed Torquay in 1892 after the seaside town in England. The Post Office opened on 20 August 1894.[3] On April 3 1908 the Spring Creek bridge was built, connecting the town to Anglesea.[4]

In 1891 the Joseph H. Scammell sailing ship struck the reef near Point Danger in Torquay and subsequently became wedged on the reef and as a result the ship broke up in the heavy seas.[2] The cargo of the Scammell was washed onto the beach of Torquay and was looted, the anchors of the Scammell are still on display at the Torquay front beach and the Torquay boat ramp.

In 1900 a primary school was opened in the newly built Presbyterian church, moving to the recreation hall in 1901, a permanent school building not opened until 1910. A bowling green, tennis courts and a golf course were opened by the 1920s.[5] The town once had 145 bathing boxes on the main beach. In 1946 the Torquay Surf Life Saving Club was formed, opening their current clubrooms in 1971 after the previous one burnt down.[6] Today it is the oldest and largest club in Victoria.

Recent years have seen increased development of the area, with the 'old town' between the highway and the beach fully developed, housing spreading to Jan Juc from the 1970s, and new estates opening up from the 1980s to the north of the town. There has been conflict between long term residents and those behind developments, with the former Torquay Primary School site on Bristol and Boston Roads sold by the government for luxury apartments and an expanded shopping centre,[7] instead of being retained for community uses.[8] The Sands golf club and residential development commenced construction on the site of the former Torquay Tip (that closed in the early 1990s) to the north west of the town in 2001, opening in 2004.[9] 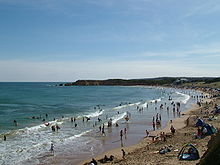 The Torquay area is famous for its surf beaches, with Jan Juc and the world famous Bells Beach located on the town's south-west outskirts. It was home to the popular Offshore Festival in the late 1990s. Many of the world's most famous surf companies have their home in Torquay, including Rip Curl, Piping Hot and Quiksilver- all of which make up part of the Surf Coast Plaza, which provides shopping and eating, as well as the Surfworld Museum.

In October 2007, The new Torquay Police Station opened at the corner of the Surfcoast highway and central avenue. The new Police station was built at a cost of $7.8 million and is considered to be a state-of-the-art facility.[11]

Ocean Views is in the south of Torquay.

The area was developed from 2000 when the first homes were built. It was originally a sheep and cattle grazing and farming area, known as Hard Man's land because of its rocky and hilly landscape making it difficult to graze on.

It is now primarily residential, backing onto Spring Creek, where a proposed development with capacity for another 20,000 people was rejected in April 2009. It has a football oval and a golf club backing onto it. It is jokingly referred to by people living in other suburbs of Torquay as Mortgage Hill or Legoland due to many new housing developments being built around it.

The area has a V-line bus stop, the bus running to Warrnambool or to Geelong, three summer bus run stops, a post office box and a park, Spring Creek Play Park. Walking access across the river to the football ground used to be difficult until in 2007 the shire built a footbridge connecting the reserve and the edge of the suburb, which is only around a 1.5 km radius. Ocean Views has also been discussed as a potential venue for the new BMX park that has been approved for construction somewhere in Torquay by the Surf Coast Shire and the Member for Corangamite Darren Cheeseman

The area is known for its high number of families.

Wombah Park is in the north east of Torquay and is home to about 1000 residents. A convenience store, an art shop, tennis courts, whites beach and a bowls club are all located in the area.

"Frog Hollow" Bordered by the Surf Coast Highway, Grossmans Rd, Messmate Rd and Coombes Rd, was the vision of Joe Briody, a grazier and golfer of some prominence in the district, who purchased the land in 1950 and farmed it until he commenced a private sub-division. St. Therese's School is located on Illawong Drive, intersection with Briody Drive which runs the length of the estate. To date much of the land has been sold with small pockets still being developed as the Edgewater development based on Eton Road next to Torquay P-9 College takes off.

Once owned by the Catholic Church, The Church Estate is bounded by Spring Creek Reserve, Spring Creek and Torquay Road and was developed in the 1980's.

Zeally Bay is in the east of Torquay. It (and Zeally Point) were named after Richard Zeally, a squatter there from 1851 on his property named South Beach. It includes a yachting club, a fishing club, Fishermans Beach, Taylor Park (a public 4-acre (16,000 m2) park) and Crowne Plaza, a multi million dollar resort and plaza which was built on the site of the old Zeally Bay Caravan Park. [12] In 2004 the Zeally Bay caravan park had been sold by the owners due to increasing land tax costs, to a developer who said they would build a retirement village.[13]

The town has an Australian Rules football team, the Torquay Tigers, competing in the Bellarine Football League [14] and a cricket team that fields 8 junior teams and 4 senior teams in the Geelong Cricket Association.

Golfers play at the course of the Torquay Golf Club on Great Ocean Road,[15] or at The Sands on Sands Boulevard, an 18-hole championship course designed by Australian golfer Stuart Appleby.[16][17]