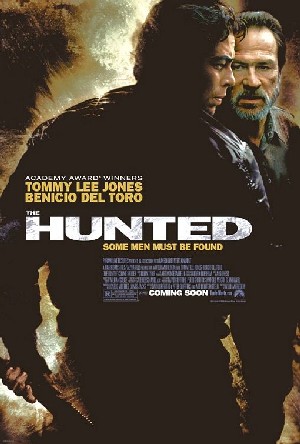 "The Hunted" is a directed by and starring and . Brian Tyler composed the film's score.

In the wilderness, two hunters are tracked and viciously murdered by Aaron Hallum (). In the wilderness of British Columbia, L.T. Bonham (), a former special operations instructor, is approached and asked to apprehend Hallum, his former student who has "gone renegade" after suffering severe battle stress from his time in .

Bonham is assisted by an FBI task force, led by an agent-in-charge Abby Durrell (). Despite the continuing presence of the FBI and local authorities, the search begins and ends as a personal battle between Bonham and Hallum, who contends that the murdered hunters were in fact "sweepers" (assassins who kill other assassins who get out of line).

The film was partially filmed in and around and . The technical adviser for the film was Tom Brown, Jr., an American outdoorsman and wilderness survival expert. The story is partially inspired by a real-life incident involving Brown, who was asked to track down a former pupil and officer who had evaded capture by authorities. This story is told in Tom's book, "". The film was primarily shot in the Portland Metropolitan Area (Oregon). Oregon was selected for the film, primarily because of the frequent overcast skies.

The overall critical reaction to the movie was negative. It scored a 33% rating on out of 140 reviews. Many reviewers noted striking similarities to "". calling it "Just a "Rambo" rehash," [ [http://www.rollingstone.com/reviews/movie/5949439/review/5949440/the_hunted The Hunted : Review : Rolling Stone ] ] while Rex Reed of the "" called it a "Ludicrous, plotless, ho-hum tale of lurid confrontation." [ [http://www.rottentomatoes.com/m/1120843-hunted/?page=2&critic=columns&name_order=desc The Hunted Movie Reviews, Pictures - Rotten Tomatoes ] ] The UK magazine, "" said the film was "scarcely exciting to watch." [ [http://www.totalfilm.com/cinema_reviews/the_hunted Total Film - The Hunted ] ]

A minority of reviewers praised the film, particularly for the fact it kept the special effects and stunts restrained. For example, said, "We've seen so many fancy high-tech computer-assisted fight scenes in recent movies that we assume the fighters can fly. They live in a world of gravity-free speed-up. Not so Friedkin's characters." [ [http://rogerebert.suntimes.com/apps/pbcs.dll/article?AID=/20030314/REVIEWS/303140302/1023 :: rogerebert.com :: Reviews :: The Hunted (xhtml) ] ] "" took a similar view. [ [http://www.timeout.com/film/72415.html The Hunted Review. Movie Reviews - Film - Time Out London ] ]

What the narrator says at the beginning is the first stanza of the Bob Dylan song "Highway 61 Revisited." A short reprise of the stanza is also said as the last lines of the movie. The song is also included in the soundtrack, but in a Johnny Cash version.