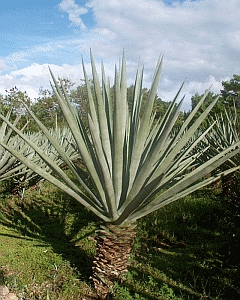 Sisal or sisal hemp is an "Agave sisalana" that yields a stiff used in making . (The term may refer either to the plant or the fiber, depending on context.) It is not really a variety of hemp, but named so because was for centuries a major source for fiber, so other fibers were sometimes named after it.

Sisal plants consist of a rosette of sword-shaped leaves about 1.5 to 2 meters tall. Young leaves may have a few minute teeth along their margins, but lose them as they mature. Sisals are sterile hybrids of uncertain origin; although shipped from the port of Sisal in (thus the name), they do not actually grow in Yucatán, the s there cultivate ("") instead. Evidence of an indigenous in suggests it as the original location, possibly as a cross of "" and "".

In the 19th century, sisal cultivation (the plant being propagated via offsets), was spread worldwide, from to the islands and , as well as to countries in , notably and , and . Among , hemp, , sunn hemp ("Crotalaria juncea") [ [http://www.hort.purdue.edu/newcrop/proceedings1996/v3-389.html Crotalaria juncea: A Potential Multi-Purpose Fiber Crop] - URL retrieved ] and other agro-based fiber species, annual sisal production is the second largest worldwide, after .

Products made from sisal are being developed rapidly, such as furniture and wall tiles made of ated sisal. Other products developed from sisal fiber include carpets

Products made with sisal fiber have the following characteristics.

The sisal plant has a 7-10 year life-span and typically produces 200-250 commercially usable leaves. Each leaf contains an average of around 1000 fibers. The fiber element, which accounts for only about 4% of the plant by weight, is extracted by a process known as decortication. In East Africa, the leaves are transported to a central decortication plant after which the fiber is dried, brushed and baled for export. In Brazil it is mainly grown by smallholders and the fiber is extracted by teams using portable raspadors. Superior quality sisal is found in East Africa, once washed and decorticated. Sisal is considered a plant of the tropics and subtropics, since production benefits from temperatures above 25 degrees Celsius and sunshine.

Thousands of tons of sisal fibers are produced annually. In 2003 Tanzania produced approximately 22,000 tons, Kenya produced 22,000 tons and 8,000 tons were produced in Madagascar. China contributed 40,000 tons with smaller amounts coming from South Africa, Mozambique, Haiti, Venezuela and Cuba. In Mexico henequen production has fallen from 160,000 tons in the 1960’s to about 15,000 tons today.

Researchers [http://www.nnfcc.co.uk] have published fiber extraction information on sisal fiber. In the process of decortication, leaves are crushed and beaten by a rotating wheel set with blunt knives, so that only fibers remain. All other parts of the leaf are washed away by water. Decorticated fibers are washed before drying in the sun or by hot air. Proper drying is important as fiber quality depends largely on moisture content. Artificial drying has been found to result in generally better grades of fiber than sun drying. Dry fibers are machine combed and sorted into various grades, largely on the basis of the previous in-field separation of leaves into size groups.

According to www.advancedbuildings.org, sisal farming initially caused great environmental degradation, because sisal plantations replaced native forests, but is still considered less damaging than most. No pesticides or chemical fertilizers are used in sisal production, and although herbicides are occasionally used, even this impact may be eliminated, since most weeding is done by hand.