Adams County lies in northeastern Indiana in the United States and shares its eastern border with Ohio. It was officially established in 1836. The county seat is Decatur.[1]

According to the 2010 census, its population was 34,387, an increase of 2.3% from 33,625 in 2000.[2] The county has four incorporated cities and towns with a total population of over 15,000,[3] as well as many small unincorporated communities. The county is divided into 12 townships which provide local services.[4][5] There are four Indiana state roads in the county, as well as three U.S. Routes and one railroad line.[6][7]

The first courthouse was a two-story frame building and was commissioned in 1839. The first jail was a log building that was completed in 1837.[10] The present Adams County courthouse was built in Decatur in 1872–1873 at a cost of $78,979.[n 1] The designer was J. C. Johnson, who had been trained as a carpenter and joiner and became a self-taught architect; he won second place in the Indiana State Capitol design competition. The construction was done by Christian Boseker of Fort Wayne. It is built of red brick with stone ornamentation.[12] 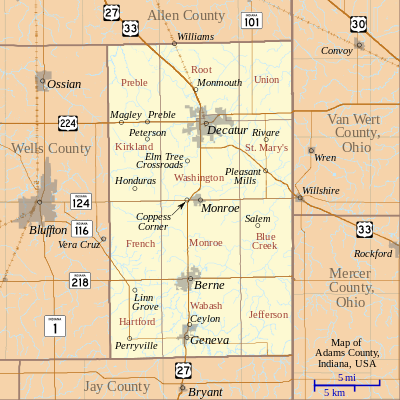 Adams County is bordered on the north by Allen County, on the west by Wells County, and on the south by Jay County. The two Ohio counties of Van Wert and Mercer lie to the northeast and southeast, respectively.

The county has four incorporated settlements, all of which lie in a rough north–south line. The city of Decatur is the largest and is also the county seat, and is in the northern part of the county where U.S. Route 27 and U.S. Route 33 intersect with the east–west U.S. Route 224. U.S. Route 27 continues south through the town of Monroe, near the center of the county, and then on through Berne and Geneva.

CSX Transportation operates a rail line that runs from Decatur to the northwest toward Fort Wayne.[7]

The county government is a constitutional body granted specific powers by the Constitution of Indiana and the Indiana Code. The county council is the legislative branch of the county government and controls all spending and revenue collection. Representatives are elected from county districts. The council members serve four-year terms and are responsible for setting salaries, the annual budget and special spending. The council also has limited authority to impose local taxes, in the form of an income and property tax that is subject to state level approval, excise taxes and service taxes.[24][25] In 2010, the county budgeted approximately $2.2 million for the district's schools and $2.8 million for other county operations and services, for a total annual budget of approximately $5 million.[26]

The county maintains a small claims court that can handle some civil cases. The judge on the court is elected to a term of four years and must be a member of the Indiana Bar Association. The judge is assisted by a constable who is elected to a four-year term. In some cases, court decisions can be appealed to the state level circuit court.[25]

The county has several other elected offices, including sheriff, coroner, auditor, treasurer, recorder, surveyor and circuit court clerk. Each of these elected officers serves a term of four years and oversees a different part of county government. Members elected to county government positions are required to declare party affiliations and be residents of the county.[25]

Each of the townships has a trustee who administers rural fire protection and ambulance service, provides poor relief and manages cemetery care, among other duties.[5] The trustee is assisted in these duties by a three-member township board. The trustees and board members are elected to four-year terms.[27]

Festivals and Fairs in Adams County

The movie A Stoning in Fulham County, starring Brad Pitt, depicted a true story of an Amish baby who was killed by teens who threw pieces of clay tile and struck a child on a buggy. The event occurred in 1979, and the movie was released in 1988. The movie is set in North Carolina.[citation needed]