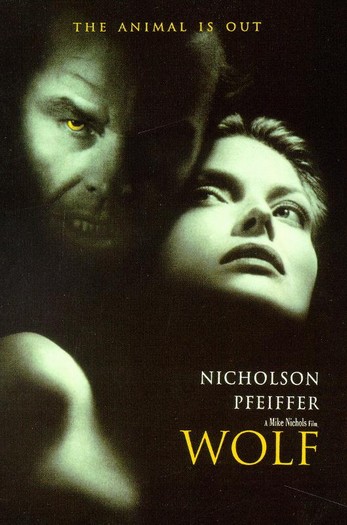 Will Randall (), a mild-mannered, middle-aged publishing editor, is fired from his job by a wealthy business tycoon, Raymond Alden (), who takes over his publishing house and replaces him with Randall's own protege Stewart Swinton (), who also happens to be having an affair with Randall's wife Charlotte (). However, a few days earlier, Randall was bitten by what he believes to be a while driving home on a snowy country road one night; he soon starts feeling rejuvenated, revitalized, and more aggressive and becomes more assertive in fighting for his job back. Eventually, to his horror, Randall also realises that he was taking on the characteristics of a wolf.

However, with the help of Alden's beautiful, headstrong daughter Laura (), he sets out for the new life ahead of him. Randall's first escapade as a wolf takes place at Laura's countryside cottage, where he wakes up in the middle of the night and predatorily hunts down a deer. In the morning he finds himself on the bank of a forest stream, dunks his head in water and realises he has blood all over his face and hands. He then drives back to the city in a state of confused trepidation, his alarm at his animal characteristics leading him to ignore conventional medical tests.

Instead, he visits an Indian healer - Dr. Vijay Alezias () who gives him an amulet that is supposed to protect him from turning completely into a wolf. Dr. Alezias asks Randall to bite him as a return favour, as Alezias himself does not have long to live. On being asked by Randall whether he would 'prefer demonization to death', Dr. Alezias replies that it would be a boon rather than a bane. He tells Will that he is a good man at heart and so has nothing to fear. Dr. Vijay Alezias also explains to Will that sometimes one does not even need to be bitten to change. Sometimes the mere passion of the wolf inside of them can transform them.

As his professional life is restored, Randall, in his aggressive avatar, fires his young nemesis Stewart, deepening each's hatred for the other. Later, Will inadvertently bites Stewart, who becomes a wolf as well. Stewart ends up raping and murdering Will's wife, in an attempt to frame Randall and seize back Randall's job at the publishing house.

Randall, meanwhile, shattered at his wife's murder, and thinking that it was his alter-ego state that killed her, goes back with Laura to her cottage, where he agrees to be locked up in the barn. Laura then gets a call from the police detective investigating Will's wife's murder, and learns that it was a canine attack that killed her. Alarmed that Will might be the unknowing perpetrator, she goes alone to the police station to find out more. There she runs into Stewart, who makes a pass at her while making it clear that Randall was as good as convicted. She hurries off from the station, making arrangements for Will and her to leave the country.

Stewart, realising that she had gone back, follows her to the cottage. After a brief struggle in the barn, where Will is locked in, he tries to rape her, but Randall frees himself from his stall, and, in werewolf form (same as his foe), they battle to the death. The evil werewolf Stewart is then shot to death by Laura. Randall, meanwhile, turns into a complete wolf and runs off into the forest. The last scene is a close-up of her face fading into dark, lupine eyes, preceded with previously-shown shots of an animal running wildly through the forest. Laura's passionate love for Will allows her to join him in his new life.Fact|date=March 2008

The film was initially delayed for six to eight months due to poor critical reaction to the third act. After reshoots, however, critics thought the ending was more satisfying and thrilling. It was mostly well-received and currently holds positive reviews among 64% of critics as displayed by RottenTomatoes.com. The film grossed $65,012,000 domestically and $131,002,597 worldwide, while making another $34,000,000 on US rentals. [http://www.imdb.com/title/tt0111742/business]

* The film features in a bit part as a cop, chasing Randall through the city zoo in one of his wolfish nighttime vagaries.
* plays a doctor in the film.
* , and Richard Jenkins had previously starred in the 1987 film "The Witches of Eastwick".