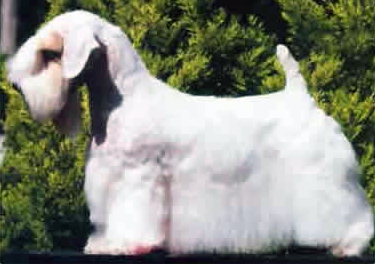 The Sealyham Terrier derives its name from Sealyham, , , the estate of Captain John Edwards, who developed a strain of dogs noted for their prowess in quarrying small game. He crossed s, s, the , the , and the , and tested the offspring for hunting ability, culling those who did not prove game. [A Dogs Tale, Radio 4, 18th March 2007]

With the advent of dog shows, the Sealyham became a popular showdog. Today it is primarily a companion dog, and not used for hunting. [ [http://terriermandotcom.blogspot.com/2007/08/sealyham-dog-in-sport.html The Sealyham Dog in Sport] ]

The first Sealyham Terrier club was created in 1908 and the breed was officially recognised in 1910. The Sealyham Terrier now is recognised by all of the major kennel clubs in the English-speaking world. The Sealyham was once one of the more popular terriers and one of the best known Welsh breeds. Today, however, (UK) lists the Sealyham as amongst the most endangered native breeds. [ [http://www.thekennelclub.org.uk/item/808 Vulnerable Native Breeds, The Kennel Club, retrieved 01 Oct 2008] ]

Sealyhams should not be over 31cms (12ins) in height, measured at the , and should weigh around 9kgs (20 lbs). Coat colours include white, white with lemon, brown, and blue. A great deal of black is undesirable, as is ticking (speckled).

Sealyham terriers have been described as es, "displaying an even temper and a calm and relaxed attitude". [ [http://www.geocities.com/Heartland/Ranch/5906/Club_Personality.htm Sealyham Personality, breed club website] ] The breed standard calls for them to be friendly but alert.

Sealyham coats are groomed by stripping, in order to keep the coat from becoming too soft. [ [http://www.ukdogs.org/terrier/sealyham/Sealyham.html Sealyham, UK dogs website] ]

*Hidalgo At Goodspice became "World Champion" (Best in Show) at the 2008 Stockholm, Sweden . Hidalgo at Goodspice also won the 2008 Best of Show.
*Jennie, pet of featured in his book "Higglety Pigglety Pop".
*At the beginning of the film "The Birds", Hitchcock (in his cameo appearance for the film) is walking his two Sealyham Terriers - Geoffrey and Stanley - out of a shop as walks in. Hitchcock also owned a third Sealyham named Mr. Jenkins.