The kwacha (ISO 4217: MWK) is the currency of Malawi as of 1971, replacing the Malawian pound. It is divided into 100 tambala. The kwacha replaced other types of currency, namely British, South African and Rhodesian, that had previously circulated through the Malawian economy. The exchange rate of the kwacha undergoes fixed periodical adjustments, but since 1994 the exchange rate has floated.[1] In 2005, administrative measures were put in place to control the exchange rate with other currencies.[2] Banknotes are issued by the Reserve Bank of Malawi.

The name kwacha derives from both the Nyanja and Bemba word for "dawn", while tambala translates as "rooster" in Nyanja. The tambala was so named because a rooster appeared on the first one tambala coin.

The kwacha replaced the Malawian pound in 1971 at a rate of two kwacha to one pound.

The first coins introduced in 1971 were in denominations of one, two, five, ten and twenty tambala. In 1986, fifty tambala and one kwacha coins were also introduced. In January of 2007, five and ten kwacha coins, which actually bear a mint date of 2006, were also released into circulation. 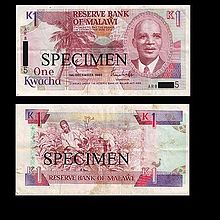 Old Malawian 1 kwacha note, carrying the date 1 Dec 1990, depicting former President-for-Life Hastings Banda on the front and workers in a Tobacco field on the reverse.

As of 2008, the following banknote denominations of banknotes are in circulation: