Enemy of the State (film)

Enemy of the State (film)

Infobox_Film
name = Enemy of the State 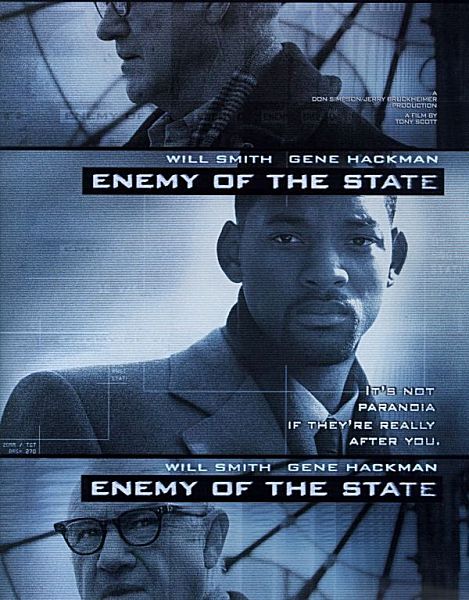 "Enemy of the State" is a 1998 about a group of rogue NSA agents who kill a Congressman in a political-related murder, and then try to cover up the murder by destroying evidence and intimidating witnesses. It was written by , produced by , and directed by . The film stars , , , and . It grossed over $250,000,000 worldwide ($111,549,836 domestically).

, , and made uncredited appearances.

As the movie opens, the legislature is close to passing to expand surveillance powers of law enforcement agencies. Republican Congressman Phil Hammersly (, uncredited) is trying to stop the bill because he believes it is an , while Thomas Reynolds () is trying to push the bill through to advance his career. Hammersly is then killed near a lake by two rogue NSA agents loyal to Reynolds, who plant a bottle of heart medication near the body to make the death seem like a heart attack. However, a set up by wildlife researcher Daniel Zavitz (Jason Lee) to monitor geese migration caught the entire incident.

When Zavitz views Hammersley's murder, he realizes that the news reports of a sudden heart attack are false. Zavitz is unaware that an NSA agent saw him retrieve the tape from the video camera. He copies the tape onto a computer cartridge, and when NSA agents arrive, he hides the tape in a and escapes. Tracked by satellite and pursued by NSA agents, Zavitz bumps into an old friend from , labor lawyer Robert Clayton Dean () who is in a ladies undergarment store shopping for a gift for his wife.

Dean had just come from a meeting with mafia members who control a labor union he is representing. He had raised their ire by showing them a videotape of one of the mafia members consorting with union officials, in violation of his parole. The mafia threaten to kill Dean within a week if he does not give them the name of the source.

While Dean hands Zavitz his business card, Zavitz drops the cartridge with the murder footage into Dean's shopping bag and then flees. Pursued by NSA agents, Zavitz jumps onto a bike and rides down a busy street, where he is hit and killed by a firetruck. After finding Dean's business card on Zavitz' body, the agents visit Dean posing as detectives from the . Unaware that Zavitz gave him the video, Dean tells them he has no knowledge of their allegations that he was passed "sensitive materials", even denying them access to his bags without a warrant.

The next day the NSA agents break into Dean's house looking for the tape. While they do not find it, they plant tracking bugs in his clothes and personal items. The NSA smears him with a false story about a love affair with Rachel Banks, an old girlfriend who acted as an intermediary between Dean and her contact, the source of the mafia tape. He is fired from his law firm and thrown out of the house by his wife. When he attempts to check into a hotel for the night, he learns his credit cards have been canceled and somebody has stolen his . With Rachel's help, Dean meets her contact, retired NSA agent Brill (), who shows him the bugs that have been planted in his belongings, and tells him the NSA is after him. Dean heads home and is able to convince his wife that he never had an affair with Rachel and after telling her everything he realizes that his son must have gotten ahold of what Zavitz was trying to give him and quickly retrieves it. After Dean finds out that Rachel had been killed by Reynold's team to frame him for murder, he and Brill make contact and finally discover that they possess the murder video - just minutes before it is destroyed in an attack by the NSA. Reynolds' team tracked them down after Dean carelessly made a phone call at a nearby convenience store.

While on the run, Brill reveals that he served as Rachel's contact because her late father was his partner prior to his retirement. Deciding to finish what they started, Dean and Brill use methods on Congressman Sam Albert (Stuart Wilson), similar to those used on Dean, to expose details of the illegal NSA operation to the NSA's top brass to get Reynolds attention and arrange a meeting with him. Their plan is to incriminate Reynolds by recording his conversation with Brill about the conspiracy on tape, but it fails due to Dean's inexperience.

Dean and Brill are captured, and it is apparent that they will be killed in order to eliminate any witnesses. Dean turns the tables by claiming that the leader of the Pintero family has the tape Reynolds is after. This leads the conspirators back to the Italian restaurant that Dean visited earlier in the movie, which he knows is under surveillance by the FBI. Dean then convinces Pintero that Reynolds made the tape of his meeting with the union leaders. Reynolds believes that the tape in question documents the Hammersley murder. The situation quickly becomes a between the agents and mobsters, escalating into a firefight.

Dean and Brill are among the few survivors. Reynolds, nearly all of the rogue agents involved in the conspiracy, and most of the mobsters – including Pintero – are killed. The FBI sweeps in and the plot behind the legislation is soon exposed. The only two surviving conspirators, NSA technicians Fiedler () and Jamie () are taken into custody by the FBI, and the NSA's involvement is covered up by the FBI, by implicating the late Pintero as the one who killed Rachel Banks. Sam Albert informs the media in an interview that the bill did not pass the legislature, and Dean is cleared of all charges and returns home with his wife, while Brill, who escapes to exile in a tropical locale, sends a friendly message to Dean via his television set.

Although set in Washington DC, most of the film was done in the neighboring city of .


*Reynolds, the antagonist and foremost proponent of the anti-privacy bill, was born on , which was the date Bell Labs researcher, , demonstrated the first remote operation (i.e. over a phone line) of a computer machine.
*Shots of the NSA satellite, seen frequently during the movie, were re-used in the pilot episode of the TV series "24".
*In the making-of video documentary on the 2006 DVD release of the film , it is revealed that "The Jar", the copper-mesh that surrounds Brill's workstation, was so effective in blocking transmissions as accurately depicted that audio technicians were forced to put the receivers for Hackman's and Smith's wireless microphones inside the cage.
*The movie's claim that the federal government possesses the ability to spy on individuals through virtually all electronic means is based upon theories surrounding the government's program.
*A screen shot of a Hackman photograph from was used in Enemy of the State, as the digital ID photo of Brill in the NSA database.
*When Brill's laptop is shown in the Faraday cage, it is using . It is also running an early version of 's for the Windows operating system. For some reason, just before beginning to 'decrypt' a video, Brill opens an image of a powerboat in Paint.