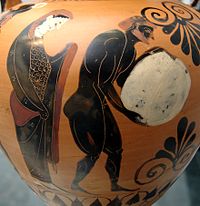 Persephone supervising Sisyphus in the Underworld, Attic black-figure amphora, ca. 530 BC.
This article is about the deity and the place in Greek mythology. For other uses, see Tartarus (disambiguation).

In classic mythology, below Uranus (sky), Gaia (earth), and Pontus (sea) is Tartarus, or Tartaros (Greek Τάρταρος, deep place). It is a deep, gloomy place, a pit, or an abyss used as a dungeon of torment and suffering that resides beneath the underworld. In the Gorgias, Plato (c. 400 BC) wrote that souls were judged after death and those who received punishment were sent to Tartarus.

Like other primal entities (such as the earth and time), Tartarus is also a primordial force or deity.

In Greek mythology, Tartarus is both a deity and a place in the underworld. In ancient Orphic sources and in the mystery schools, Tartarus is also the unbounded first-existing entity from which the Light and the cosmos are born.

In the Greek poet Hesiod's Theogony, c. 700 BC, the deity Tartarus was the third force to manifest in the yawning void of Chaos.

As for the place, Hesiod asserts that a bronze anvil falling from heaven would fall 9 days before it reached the Earth. The anvil would take nine more days to fall from Earth to Tartarus. In The Iliad (c. 700), Zeus asserts that Tartarus is "as far beneath Hades as heaven is high above the earth." It is one of the primordial objects that sprung from Chaos, along with Gaia (Earth) and Eros (desire).

While, according to Greek mythology, The Realm of Hades is the place of the dead, Tartarus also has a number of inhabitants. When Cronus, the ruling Titan, came to power he imprisoned the Cyclopes in Tartarus and set the monster Campe as guard. Some myths also say he imprisoned the three Hecatonchires (giants with fifty heads and one hundred arms). Zeus killed Campe and released the Cyclopes and the Hecatonchires to aid in his conflict with the Titan giants. The gods of Olympus eventually defeated the Titans. Many, but not all of the Titans, were cast into Tartarus. Epimetheus, Metis, and Prometheus are some Titans who were not banished to Tartarus. Cronus was imprisoned in Tartarus. Other gods could be sentenced to Tartarus, as well. Apollo is a prime example, although Zeus freed him. In Tartarus, the Hecatonchires guarded prisoners. Later, when Zeus overcame the monster Typhon, the offspring of Tartarus and Gaia, he threw the monster into the same pit.

Originally, Tartarus was used only to confine dangers to the gods of Olympus. In later mythologies, Tartarus became the place where the punishment fits the crime. For example:

According to Plato (c. 427 BC), Rhadamanthus, Aeacus and Minos were the judges of the dead and chose who went to Tartarus. Rhadamanthus judged Asian souls; Aeacus judged European souls and Minos was the deciding vote and judge of the Greek.

Plato also proposes the concept that sinners were cast under the ground to be punished in accordance with their sins in the Myth of Er. Cronus, the ruler of the Titans, was thrown down into the pits of Tartarus by his children.

There were a number of entrances to Tartarus in Greek mythology. One was in Aornum.[2]

In Roman mythology, Tartarus is the place where sinners are sent. Virgil describes it in the Aeneid as a gigantic place, surrounded by the flaming river Phlegethon and triple walls to prevent sinners from escaping from it. It is guarded by a hydra with fifty black gaping jaws, which sits at a screeching gate protected by columns of solid adamantine, a substance akin to diamond - so hard that nothing will cut through it. Inside, there is a castle with wide walls, and a tall iron turret. Tisiphone, one of the Erinyes who represents revenge, stands guard sleepless at the top of this turret lashing a whip. There is a pit inside which is said to extend down into the earth twice as far as the distance from the lands of the living to Olympus. At the bottom of this pit lie the Titans, the twin sons of Aloeus, and many other sinners. Still more sinners are contained inside Tartarus, with punishments similar to those of Greek myth.

Tartarus is only known in Hellenistic Jewish literature from the Greek text of 1 Enoch 20:2 where Uriel is the jailer of 200 angels that sinned.[3]

In the New Testament the noun Tartarus does not occur but tartaroo (ταρταρόω, "throw to Tartarus") a shortened form of the classical Greek verb kata-tartaroo ("throw down to Tartarus") does appear in 2 Peter 2:4. Liddell Scott provides other uses for the shortened form of this verb including Acusilaus (5th century BC), Joannes Laurentius Lydus (4th century AD) and the Scholiast on Aeschylus, Eumenides who cites Pindar relating how the earth tried to tartaro "cast down" Apollo after he overcame the Python.[4] In classical texts the longer form kata-tartaroo is often related to the throwing of the Titans down to Tartarus.[5]

The ESV is one of several English versions which gives the Greek reading Tartarus as a footnote:

For if God did not spare angels when they sinned, but cast them into hell [1] and committed them to chains [2] of gloomy darkness to be kept until the judgment;"

Adam Clarke reasoned that Peter's use of language relating to the Titans was an indication that the ancient Greeks had heard of a Biblical punishment of fallen angels.[6] Some Evangelical Christian commentaries distinguish Tartarus as a place for wicked angels and Gehenna as a place for wicked humans on the basis of this verse.[7] Other Evangelical commentaries, in reconciling that some fallen angels are chained in Tartarus, yet some not, attempt to distinguish between one type of fallen angels and another.[8]

The Book of Enoch, dated to 400-200 BC, states that God placed the archangel Uriel "in charge of the world and of Tartarus" (20:2). In 1 Enoch, Tartarus is generally understood to be the place where the fallen Watchers are imprisoned.