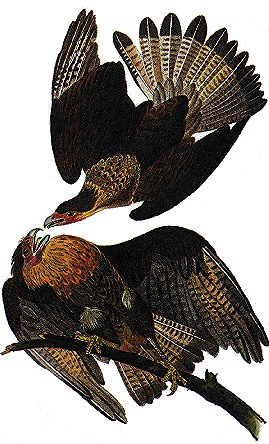 The Guadalupe Caracara, "Caracara lutosa" or "lotusos", is an extinct belonging to the family (Falconidae). It was, together with the closely related Crested and , formerly placed in the genus "Polyborus". It was also known as the Quelili or the Calalie.

This inhabited 's until the beginning of the 20th century. The is sometimes incorrectly referred to as "Guadalupe Caracara", because the extinct birds were formerly considered a of the extant . They were reinstated as a full species in 2000. [AOU (2000)]

It was described as "evil" and "vicious" by early observers. It was driven to extinction by a hunting and poisoning campaign led by goatherders on Guadalupe Island. In 1876 the species was common throughout the island. However, in March 1897, only one bird was encountered, [Kaeding (1905)] but additional members of the species survived. On , collector encountered 11 and preserved nine as scientific specimens. He may have shot the last of the caracaras on Gaudalupe Island, believing from their fearlessness and ease of finding them that they were common. [Abbott 1935] There was one more (unconfirmed) sighting in 1903Fact|date=February 2007; the bird was certainly gone in 1906. [Thayer & Bangs (1908)] The Guadalupe Caracara is one of the few species that were intentionally rendered extinct by humans. In its particular case, it was demanded by goat farmers that the birds were to be killed off as they occasionally fed on young goats (though the role of the caracara as a predator of goats was much exaggerated).

Around 35 specimens (skins, skeletons and 2 eggs) remain in public collections today. [Luther (1996)] Specimens are available for display in , , and .