Insects in the order Diptera, family Tabanidae, are commonly called horse flies. Often considered pests for the bites that many inflict, they are among the world's largest true flies. They are known to be extremely noisy during flight. They are also important pollinators of flowers, especially in South Africa. Tabanids occur worldwide, being absent only at extreme northern and southern latitudes. Flies of this type are among those known sometimes as gadflies, breeze flies[2], zimbs or clegs. In Australia, they are known as "March Flies". In some areas of Canada, they are also known as Bull Dog Flies. Elsewhere the term "horse fly" refers to the unrelated dipteran family Bibionidae.[citation needed]

There are approximately 4,500 species of horse flies known worldwide, over 1000 of which are in the genus Tabanus. Three subfamilies are widely recognised:

Two well-known types are the common horse flies, genus Tabanus Linnaeus, 1758 and the deer flies, genus Chrysops Meigen, 1802 are also known as banded horse flies because of their coloring. Both these genera give their names to subfamilies. The "Blue Tail Fly" in the eponymous song was probably a tabanid common to the southeastern United States.

Adult horse flies feed on nectar and sometimes pollen. Females usually require a blood meal for reproduction. Males lack the necessary mouth parts (mandibles) for blood feeding. Most female horse flies feed on mammal blood, but some species are known to feed on birds, amphibians or reptiles. Immature or larval horse flies are fossorial predators of other invertebrates in moist environments. 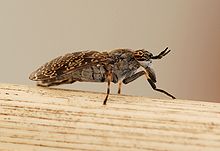 The bite from a large specimen is painful. Most short tongued (short proboscid) species of horse flies use their knife-like mandibles to rip and/or slice flesh apart. Flies with longer proboscides bite more like a mosquito, their stylet-like mouthparts piercing the host's skin like needles.

The horsefly's modus operandi is less secretive than that of its mosquito counterparts, although it still aims to escape before their victim becomes conscious of the pain signals. Moreover, the pain of a horsefly bite may mean that the victim is more concerned with assessing the wound, and not swatting the interloper. In any case defense is difficult, considering the agile nature of the fly. The bites may become itchy, sometimes causing a large swelling afterward if not treated quickly.

Eggs are laid on stones or vegetation usually close to water. On hatching, the larvae fall into water or moist earth, feeding voraciously on invertebrates, such as snails, earthworms and other insects. 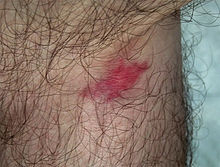 A bite of horse-fly on a human.

Tabanids are known vectors for some blood-borne diseases of animals and humans. Tabanids are very good vectors of the equine infectious anaemia virus, as well as some Trypanosome species. Species in the genus Chrysops are biological vectors of Loa loa, transmitting this parasitic filarial worm between humans. They have also been known to transmit anthrax among cattle and sheep and tularemia between rabbits and humans.

Blood loss is a common problem in some animals, when large flies are abundant. Some animals have been known to lose up to 300 ml of blood in a single day from tabanid bites, which can severely weaken or even kill them.