Child & Co. is a private banking house in the United Kingdom, part of the Royal Bank of Scotland Group. It is based at 1 Fleet Street in the City of London.

Child & Co. is one of the oldest financial institutions in the UK, and can trace its roots back to a London goldsmith business in the late 17th century. The name Child comes from Francis Child, who entered into partnership with Robert Blanchard in 1664. Child married Blanchard's stepdaughter and inherited the whole business on Blanchard's death. Renamed Child and Co, the business thrived, and was appointed the "jeweller in ordinary" to King William III.

After Child died in 1713, his three sons ran the business, and during this time, the business transformed from a goldsmith's to a fully fledged bank. Its first bank note was issued in 1729.

By 1782, Child's grandson Robert Child was the senior partner in the firm. However, when he died in 1782 without any sons to inherit the business, he did not want to leave it to his only daughter, Sarah Anne Child, because he was furious over her elopement with John Fane, 10th Earl of Westmorland earlier in the year. To prevent the Earls of Westmorland from ever acquiring his wealth, he left it in trust to his daughter's second surviving son or eldest daughter. This turned out to be Lady Sarah Sophia Fane, who was born in 1785. She married George Child-Villiers, 5th Earl of Jersey in 1804, and upon her majority in 1806 she became senior partner. She exercised her rights personally until her death in 1867. At that point the Earl of Jersey & Frederick William Price of Harringay House were appointed as the two leading partners.[1] Ownership continued in the Jersey family until the 1920s. 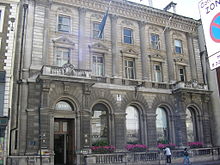 In 1923, George, 8th Earl of Jersey sold the bank to Glyn, Mills & Co., a London-based commercial bank. Williams Deacon's Bank acquired Glyn's in 1939 (both subsequently taken over by the Royal Bank of Scotland and known as Williams & Glyn's Bank from 1970 to 1985), retaining Child & Co. as a separate business, as which it continues to this day at No. 1, Fleet Street.

Over their 350-year history Child & Co has attracted an exclusive client base including The Honourable Societies of Middle Temple and Lincoln's Inn, and numerous landowning families. Scholars of the Inns receive their awards by cheques drawn on Child & Co, and many Barristers continue to use the bank throughout their professional lives. Several universities including The London School of Economics, Oxford University, and Imperial College London are reported to hold accounts.

Relationship with Royal Bank of Scotland