Infobox_Film
name = Set It Off 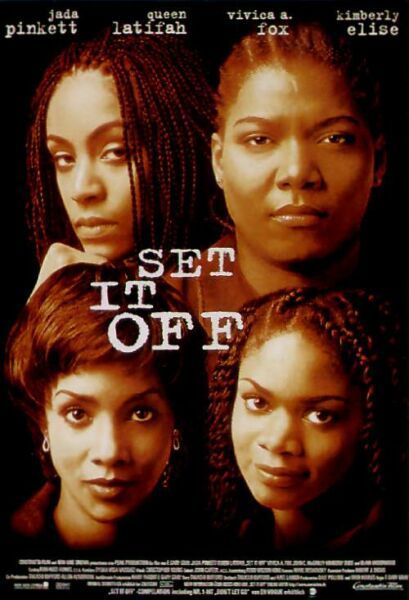 "Set It Off" is a 1996 - directed by , and stars , , and , as four close friends from Los Angeles who decide to plan and execute a . They decide to do so for different reasons, although all four want better for themselves and their families.

Four women from the projects plan to rob banks in order to escape poverty and their harsh situations. Francesca 'Frankie' Sutton (), is an intelligent yet self-righteous bank teller who loses her job after the bank she worked at gets robbed and several people are left dead, including two of the bank robbers. After being interrogated by Detective Strode (John C. McGinley), she reveals that she's familiar with one of the robbers because they live in the same neighborhood. Feeling uneasy about the fact that Frankie knew one of the robbers, her boss fires her despite her protests. Disappointed and angry, Frankie reluctantly gets a job at a janitorial company where her three best friends Stony, Cleo, and Tisean work. She also finds out how much of a menace and a bully the manager Luther (Thomas Jefferson Byrd) is.

Lita 'Stony' Newsom (), is a young woman struggling to pay her bills and take care of her younger brother, Stevie, whom she planned to send to college. Stony and Stevie's parents were killed in a car accident 4 years earlier and she had to step up to the plate as the "mother" and the older sister. It is shown that Stevie was friends with Lorenz (Samuel Monroe Jr.), the surviving bank robber, much to Stony's dismay. After visiting then leaving Lorenz's apartment, Stevie is confronted by cops, who falsely identify him as Lorenz. Ordered onto the ground, Stevie can't due to champagne bottle (earlier given to him by Lorenz) in his coat. "His reaching into his pocket" is met by panicked cries of "a gun being drawn" prompting (in an unprovoked display of "") him to be fatally gunned down by the police (despite his screams to stop). Detective Strode regretfully realized at the last minute that not only have they caught the wrong guy, but have shot a defenseless man and alerted the true suspect to their presence. Moments later, Lorenz was shot and killed by the police after an intense shoot-out. Stony is left to mourn her fallen brother.

CleoPatra 'Cleo' Sims (), is the toughest and meanest one of the group. She has a criminal record for stealing cars, smokes , and uses constant . She resides in an abandoned with her lover, Ursula. After one of her best friends loses her job and the other one loses her brother, Cleo suggests that they all plan to rob a bank.

Tisean 'T.T.' Williams (, in her debut role), is a timid, mild-mannered woman and a single mother to her toddler son, Jajuan ( & ). She was against her friends' idea to rob a bank until her son was taken away by a social worker after he swallowed some disinfenctant spray and suffered severe poisoning.

Using and sunglasses to disguise their faces, the four women rob two banks, collect a large amount of money and make plans to leave the state. They all hid the money inside an air vent in a small room at the janitorial. By then, Stony had fallen in love with a well-paid, handsome banker named Keith Weston (), and she considers staying in Los Angeles to be with him. One day, Cleo, Frankie and Tisean come to work to find out that Luther quit and was replaced by a new manager. Feeling suspicious, the three women check the vent and discover that the money was gone. A little while later, they manage to track him down at a hotel. They barge into his room while he was having sex with a and Cleo demands to know where their money is. Despite Cleo's threats to shoot him, Luther continues to pretend as if he knows nothing about any money. As soon as Cleo turns her back, Luther aims a gun of his own at her but Tisean shoots him dead. They all fled the scene. Later on that day, Cleo is arrested by Detective Strode under the suspicion that she killed Luther. She participates in a line-up where the prostitute that was present at the time of the shooting was asked to identify Luther's killer. However, she refuses to cooperate and Cleo is released from jail.

Meanwhile Stony, Frankie, and Tisean are at Cleo's garage having a heated argument about the incident. Frankie wants to rob the biggest bank in town, but an angry Stony wants no part of it. Moments later, Cleo arrives at the garage and says that the police are all over them, therefore, they need to rob another bank and leave the state immediately. Everyone but Stony agrees to rob the biggest bank in town which is same bank that Keith works at. Disgusted, Cleo questions Stony's loyalty to her friends, then Stony relunctantly agrees. After luring Keith out of the bank, Stony, Cleo, and Tisean began to rob it while Frankie waited in the get-away car. Before they could make it out the door, Detective Strode and his partner stopped them and ordered them to drop their weapons. Tisean and Stony relunctantly put their guns down, but Cleo refused to. Suddenly, the bank security guard took several shots at Tisean, severely wounding her. Then a violent shoot-out erupts between an enraged Cleo and the police. After that, they get Tisean inside of the car and drove away towards the hospital. Unfortunately, Tisean died in Stony's arms on the way to hospital. They sadly abandoned Tisean's body in the car and drove away in Cleo's 1962 .

The three women find themselves speeding away from police cars and helicopters. Next, Cleo pulls into a tunnel and tells Stony and Frankie to run away while the police chase her in the opposite direction. They sadly agree and they run away. Once they were clearly out of sight of the police, Stony and Frankie tearfully embrace and split up. Stony heads towards the bus station. Meanwhile, the cops are catching up to Cleo and she suddenly finds herself surrounded. Realizing that she lost the battle but still not wanting to go down without a fight, Cleo steps out of her car shooting at the police with her ; however, she is quickly and brutally gunned down. After Cleo's death, the police find Frankie and order her to surrender. Detective Strode softly tells her that they want to save her since she's the only one that's alive. He politely asks Frankie to lay on the ground so they can arrest her, but she puts a gun to his head and then defies him by trying to run away. She is quickly shot in the back and killed by another officer. Stony painfully witnessed the whole thing from the bus window. Detective Strode noticed Stony on the bus, but he decides not to acknowledge the other officers for after all she's been through.

Mourning the death of her friends and brother, Stony escapes to Mexico. After it's revealed that she has the stolen money in her possession, she shaves her head, and after making a long distance call to Keith to let him know that she's all right, the movie ends with her driving through the mountains to start a new life.