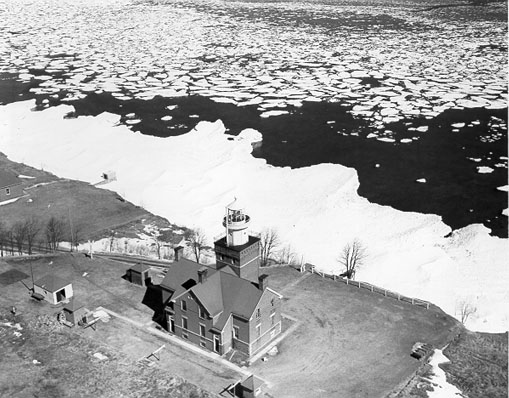 caption = Undated photo
location =
coordinates =
yearlit = 1896
automated = 1945
yeardeactivated = 1961 (Now Private Aid to Navigation)
foundation =
construction = Brick
shape = Square
marking = red brick with white lantern
height = Tower - convert|64|ft|m
elevation = Focal plane - convert|108|ft|m [ [http://www.terrypepper.com/lights/lists/focalheight.htm Terry Pepper, List of focal Planes.] ]
lens = Third order
currentlens =
intensity =
range = convert|11|mi|km [ [http://www.navcen.uscg.gov/pubs/LightLists/V7COMPLETE.PDF Volume 7, US Coast Guard Lightlist (PDF).] ]
characteristic = The Big Bay Point Light is a which stands on a tall bluff over rocky point [ [http://lighthouse.boatnerd.com/gallery/Superior/BigBay.htm Wobser, David, Big Bay Point Light at Boatnerd.com] ] halfway between Marquette and the Portage Entry in the of . Today it is the only operational lighthouse with a . It is reputed to be haunted, and the novel and movie "" were inspired by a murder at the lighthouse.

History of the light

The establishment of a station at Big Bay Point was recommended to the Lighthouse board in 1882 as follows: "The point occupies a position midway between and , the distance in each case being 15 to 18 miles. These two lights are invisible from each other and the intervening stretch is unlighted. A light and fog signal would be a protection to steamers passing between these points. Quite a number of vessels have in past years been wrecked on Big Bay Point". [ [http://www.terrypepper.com/lights/superior/bigbay/bigbay.htm Terry Pepper, Seeing The Light - Big Bay Point Lighthouse ] ]

The lighthouse was deactivated and sold to private owners. Thereafter, the Fresnel lens was recovered and reinstalled in 1990.

The light was built in 1896 [ [http://clarke.cmich.edu/lighthouses/lhtime1.htm Chronology of Michigan lighthouses, Clarke Historical Library, Central Michigan University.] ] at a cost of $25,000. It was automated in 1944. In 1961 the lighthouse was sold to John Pick for $40,000. Dr. Pick had it restored and furnished with antiques. It has been a since 1986.

Because of its picturesque location, form and color it is often the subject of photographs, and drawings. [ [http://home.rochester.rr.com/mjm/light2.html Mulgrew, Marilyn, Drawing of Big Bay Point Light.] ]

Big Bay Point Light is one of 149 lighthouses in Michigan. Michigan has more lighthouses than any other state. See .

Life at the light

The keeper's house consists of 18 rooms in a 52' x 52' two story brick building. The attached tower is tall enough to make the light 105' above . Originally, this housed the keeper (and his family) and an assistant keeper with family as well. As the country moved to 8 hour shifts, a frame building with outhouse was built at the bottom of the hill for a second assistant keeper.

At the time the light was built the only way to get to and from the light was by water. Those who worked at Big Bay Point were truly isolated. The keepers' wives not only had to do the usual housekeeping and food preparation, but also schooling of any children in residence.

The light tower has intricate fortress style brick work near its apex, supporting an octagonal lantern and iron watch room. The light was automated in 1941. The station was sold in 1961 after a new light was erected on a steel tower on the grounds. [ [http://lighthouse.boatnerd.com/gallery/Superior/BigBay.htm Wobser, David, Big Bay Point Light at boatnerd.com.] ]

Notable deaths at the light

There have been at least two notable deaths associated with the lighthouse, which have given rise to the belief that the light is haunted, and have inspired the book and movie "".

Red-haired William Prior, who was the first lighthouse keeper at Big Bay point, was devastated when his son, Edward, died of a leg injury. He vanished in 1901 and his body was found almost a year and a half later hanging from a tree about a mile from the lighthouse. He may have committed suicide, or have been murdered. His red-haired ghost has been seen in mirrors, and doors have a tendency to bang in the middle of the night.

The second incident took place in 1951, when the assistant's house was used to train an anti-aircraft battalion. An army officer murdered the owner of a local tavern, inspiring "Anatomy of a Murder".