Even Worse
For the punk band, see Even Worse (band).

Even Worse is the fifth studio album by "Weird Al" Yankovic, released in 1988. The album was the fifth produced by former The McCoys guitarist Rick Derringer. Recorded between November 1987 and February 1988, this album helped to revitalize Yankovic's career after the critical and commercial disappointment of his previous album Polka Party! (1986).

The music on Even Worse is built around parodies and pastiches of pop and rock music of the mid 1980s. Even Worse, like Polka Party! before it, themed all but one of its parodies. Half of the album is made up of parodies, featuring jabs at Michael Jackson, George Harrison, Tiffany, the folk song "La Bamba," and Billy Idol. The other half of the album is original material, featuring many "style parodies," or musical imitations that come close to, but do not copy, existing artists. These style parodies include imitations of specific artists like Oingo Boingo, Beastie Boys, and James Taylor. Even Worse has the distinction of being one of two albums by "Weird Al" Yankovic lacking any polka renditions of pop songs or medleys, the other being his debut album "Weird Al" Yankovic (1983), released five years earlier. This album's title and cover art of the album is a spoof on that of Michael Jackson's 1987 album, Bad.

Even Worse was met with mostly positive reviews and peaked at number twenty-seven on the Billboard 200 and became Yankovic's best selling album. The album also produced one of Yankovic's hit singles, "Fat," a parody of Michael Jackson's "Bad," which peaked at number ninety-nine on the Billboard Hot 100 and became a staple of MTV. The album was quickly certified as a gold record, and later as a platinum record for sales of over one million copies in the United States, which, at the time, was Yankovic's first platinum record. "Fat" was later nominated and won a Grammy Award for Best Concept Music Video at the 1989 Grammy Awards.

After much success in the early 80s, comedy artist "Weird Al" Yankovic released Polka Party! in 1986. Despite featuring parodies of hit songs like "Living in America" and "Addicted to Love" the album was a critical and commercial failure, failing to produce a charting single and only managing to peak at at only number 177 on the Billboard 200. After the disappointment with Polka Party! Yankovic went on the record saying, "I thought it was the end of my career."[1] For the most part of 1987, Yankovic took a short recording break.[2]

In Novermber 1987, Yankovic returned to the studio to craft his follow-up to Polka Party! Once again, former The McCoys guitarist Rick Derringer was brought in to produce the album. During the first session, two songs were recorded, "Stuck In A Closet With Vanna White," and "Melanie."[3] The next month, three songs were recorded, Good Old Days," "You Make Me," and "Velvet Elvis."[3] Finally, in the early winter of 1988, the remaining songs were recorded.[3]

One of the first originals recorded for the album was "Stuck in a Closet With Vanna White" about a man describing his bizarre recurring dream about Vanna White. Allmusic described the song as a "real winner for Yankovic" because it "was the first song [Yankovic] wrote that his [...] target audience [...] actually liked as much or even more than his parodies."[4] "You Make Me" is a song involving a person's desire to engage in strange and/or violent behavior compelled by the weirdness of another person. According to the liner notes of The Permanent Record, "It's about as close as [Yankovic has] ever come to writing a real love song."[1] Musically, the song is a style parody of Oingo Boingo;[1][5][6]

"Melanie" is stalker's twisted love song to his neighbor Melanie.[7] According to Yankovic, he wrote several additional verses for "Melanie" that he would only sing to his friends.[1] "Twister" is an ode to the Milton Bradley game Twister. The song is a style parody of the Beastie Boys.[7][8] When Yankovic was recording the song, he initially recorded about 20 vocal takes. However, when it came time to pick the right take, he opted for the first because it sounded "more raw and more off-the-cuff."[7] The album's closer, "Good Old Days" is about a psychopath fondly remembering his childhood. Yankovic described the song as an "experiment."[1] He "wanted to see if [he] could write a song as if Charlie Manson and James Taylor were collaborating."[1]

The first parody recorded for Even Worse was "I Think I'm a Clone Now." The song, a spoof of "I Think We're Alone Now" as covered by Tiffany,[9] is the story of a man who details his life as a clone of another person. The second parody recorded was "Alimony," a parody of "Mony Mony" as covered by Billy Idol.[9] The song is a diatribe about the narrator's ex-wife, who takes everything he owns for alimony payments. Although the song sounds as if it were recorded live—complete with clapping, screaming, and yelling—the track was entirely recorded in the studio.[10] This is the only instance of Yankovic covering two songs originally made famous by the same artist on one album, as both "Mony Mony" and 'I Think We're Alone Now" were songs first performed by Tommy James and the Shondells. 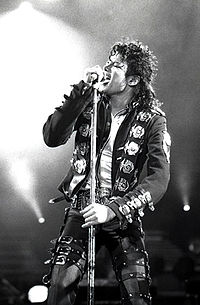 Michael Jackson was a fan of Yankovic's music. After the success of "Fat," he ordered twelve copies to give to friends and family (1988, Zoran Veselinovic).

When it came time to record a lead single, Yankovic once again turned his attention to Michael Jackson.[1] Jackson had just released his album Bad, a follow-up to 1983's immensely successful album Thriller. After Yankovic first heard the lead single, "Bad" he immediately envisioned a parody entitled "Fat."[1] Initially, part of Yankovic didn't want to record another Michael Jackson parody.[1] He later said, "I was still primarily known as the 'Eat It" guy and I didn't want to become known as the guy who just rides Michael's coattails."[1] He later relented and sought out Jackson for permission. Jackson, a fan of Yankovic's work, had already let Yankovic parody his 1983 hit single "Beat It."[11] When presented with the new potential parody, Jackson not only approved it, but let Yankovic use his own Moonwalker subway set for the music video.[1][11] Yankovic later presented Jackson with a gold record of Even Worse after the album sold over 500,000 copies.[11] Jackson was so pleased with the song and video, he ordered twelve copies to give to his friends.[12] Yankovic later said "He doesn't have to let me do this kind of stuff. [...] The only reason he would let me is because he has a great sense of humor.[12]

The music video for the song features a leather-clad Yankovic "expanding to 800 pounds and bouncing around a subway set."[1] To find suitable back-up dancers, ads were placed in Los Angeles newspapers for "Very Fat Dancers."[1] One of the men used in the video was actually a pizza delivery man who had delivered food to the casting offices.[1] Due to the music video, "Fat" became one of Yankovic's biggest hits.[12] Although only managing to peak at number ninety-nine on the Billboard Hot 100, the song's music video got extensive play on MTV,[12] which helped the album attain platinum status. In addition, "Fat" was later nominated and won a Grammy Award for Best Concept Music Video at the 1989 Grammy Awards,[1] at the time, Yankovic's second Grammy Award.[13]

The last parody recorded for the album was "Lasagna," a parody of the traditional folk song "La Bamba."[3][9] The song is mainly about Italian culture with a heavy emphasis on cuisine. When Yankovic began writing the song, he originally wanted it to be sung in Italian. He later said, "I was actually going through Italian phrase books and dictionaries until I realized that the humor would be lost on 99% of the audience, so I decided to do the whole thing in English but with kind of a bad Italian accent."[1] When the song was released as a single, it did not have a music video. However, ten years later in 1997 a short video was made for the The Weird Al Show. Under U.S. law, Yankovic can parody any song he wants as long as he pays royalties to use the original music. However, as a personal rule, he asks for permission anyway in order to maintain good relations with the industry.[14] This particular song is an exception to that rule. Although the song is a parody of the Los Lobos cover version,[9] "Lasagna" marked Yankovic's first parody that did not require either permission from an artist or a payment of royalties, since the song "La Bamba" is a traditional folk song that is not attributed to any specific writer. Thus, Yankovic is the only writer given credit in the liner notes.[15]

Even Worse has received relatively favorable reviews. Allmusic awarded Even Worse four out of five stars, one of the highest ratings for Yankovic on the site.[19] AllMusic reviewer Eugene Chadbourne said, "Trust Weird Al Yankovic to name an album "Even Worse" even as his recordings were getting better again."[4] Unlike previous albums, which were praised for their parodies but criticized for their originals, Chadbourne wrote that "Yankovic even manages to shatter all previous barriers and comes up with some funny original material as well," citing "Good Old Days" and "Stuck in a Closet With Vanna White" as some of his best originals.[4] Both Even Worse and "Fat" were nominated for Grammys.[13] Although Even Worse was not a winner, "Fat" won a Grammy Award for Best Concept Music Video in 1989.[13]

Even Worse was released April 12, 1988, and, at the time of its release, was Yankovic's best selling album. Even Worse initially debuted on the Billboard 200 at number 122 and steadily began to rise over the course of the next few weeks.[20] On July 2, the album peaked at number 27.[20] Eight weeks later, after steadily falling from the charts, the album dropped off, re-entering the following week at number 104. In the next few weeks, the album began descending down the chart.[20] It later made a final reappearance at number 196 on October 29.[20] The album spent a total of 25 weeks on the chart.[20]

On July 18, 1988—less than three months after its release—the album was certified Gold by the Recording Industry Association of America (RIAA).[21] On January 27, 1994, the album was certified Platinum by the RIAA.[21] At the time of its certification, it was Yankovic's first Platinum record[21] and until 1992 it was his best-selling album.[1]