Freewheel
For information about the bicycle component, see Cogset. 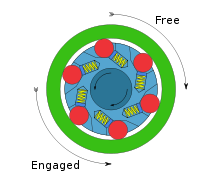 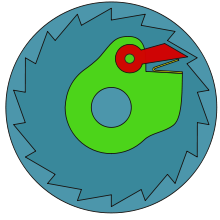 The condition of a driven shaft spinning faster than its driveshaft exists in most bicycles when the rider holds his or her feet still, no longer pushing the pedals. In a fixed-gear bicycle, without a freewheel, the rear wheel would drive the pedals around.

An analogous condition exists in an automobile with a manual transmission going down hill or any situation where the driver takes his foot off the gas pedal, closing the throttle; the wheels want to drive the engine, possibly at a higher RPM. In a two-stroke engine this can be a catastrophic situation: as many two stroke engines depend on a fuel/oil mixture for lubrication, a shortage of fuel to the engine would result in a shortage of oil in the cylinders, and the pistons would seize after a very short time causing extensive engine damage. Saab used a freewheel system in their two-stroke models for this reason and maintained it in the Saab 96 V4 and early Saab 99 for better fuel efficiency.

Most bicycle freewheels use an internally step-toothed drum with two or more spring-loaded, hardened steel pawls to transmit the load. More pawls help spread the wear and give greater reliability although, unless the device is made to tolerances not normally found in bicycle components, simultaneous engagement of more than two pawls is rarely achieved.

By its nature, a freewheel mechanism acts as an automatic clutch, making it possible to change gears in a manual gearbox, either up- or downshifting, without depressing the clutch pedal, limiting the use of the manual clutch to starting from standstill or stopping. The Saab freewheel can be engaged or disengaged by the driver by pulling or pushing a lever. This will lock or unlock the main shaft with the freewheel hub.

A freewheel also produces slightly better fuel economy on carbureted engines (without fuel turn-off on engine brake) and less wear on the manual clutch, but leads to more wear on the brakes as there is no longer any ability to perform engine braking. This may make freewheel transmissions dangerous for use on trucks and automobiles driven in mountainous regions, as prolonged and continuous application of brakes to limit vehicle speed soon leads to brake-system overheating followed shortly by total failure.

In agricultural equipment an overrunning clutch is typically used on hay balers and other equipment with a high inertial load, particularly when used in conjunction with a tractor without a live power take-off (PTO). Without a live PTO, a high inertial load can cause the tractor to continue to move forward even when the foot clutch is depressed, creating an unsafe condition. By disconnecting the load from the PTO under these conditions, the overrunning clutch improves safety. Similarly, many unpowered 'push' cylinder lawnmowers use a freewheel to drive the blades: these are geared or chain-driven to rotate at high speed and the freewheel prevents their momentum being transferred in the reverse direction through the drive when the machine is halted.

A freewheel assembly is also widely used on engine starters as a kind of protective device. Starter motors usually need to spin at 3,000 RPM to get the engine to turn over. When the key is turned to the start position for any amount of time after the engine has already turned over, the starter can not spin fast enough to keep up with the flywheel. Because of the extreme gear ratio between starter gear and flywheel (about 15 or 20:1) it would spin the starter armature at dangerously high speeds, causing an explosion when the centripetal force acting on the copper coils wound in the armature can no longer resist the outward force acting on them. In starters without the freewheel or overrun clutch this would be a major problem because, with the flywheel spinning at about 1,000 RPM at idle, the starter, if engaged with the flywheel, would be forced to spin between 15,000 and 20,000 RPM. Once the engine has turned over and is running, the overrun clutch will release the starter from the flywheel and prevent the gears from re-meshing (as in an accidental turning of the ignition key) while the engine is running. A freewheel clutch is now used in many motorcycles with an electric starter motor. It is used as a replacement for the Bendix drive used on most auto starters because it reduces the electrical needs of the starting system.

In addition to the automotive uses listed above (i.e. in two-stroke-engine vehicles and early four-stroke Saabs), freewheels were used in some luxury or up-market conventional cars (such as Rovers and Cords) from the 1930s into the 1960s. The freewheel meant that the engine returned to its idle speed on the overrun, thus greatly reducing noise from both the engine and gearbox. The mechanism could usually be locked to provide engine braking if needed. A freewheel was also used in the original Land Rover vehicle from 1948 to 1951. The freewheel controlled drive from the gearbox to the front axle, which disengaged on the overrun. This allowed the vehicle to have a permanent 4 wheel drive system by avoiding 'wind-up' forces in the transmission. This system worked, but produced unpredictable handling, especially in slippery conditions or when towing, and was replaced by a conventional selectable 4WD system.

Other car makers fitted a freewheel between engine and gearbox as a form of automatic clutch. Once the driver released the throttle and the vehicle was on the overrun the freewheel would disengage and a gearchange could be made without the use of the clutch pedal. This feature appeared mainly on large, luxury cars which often had heavy clutches and gearboxes without synchromesh as the freewheel permitted a smoother and quieter change. Citroën combined a freewheel and a centrifugal clutch to make the so-called 'TraffiClutch' where the car could be started, stopped and the lower gears be changed without using the clutch pedal. This was an option on Citroën 2CVs and its derivatives and, as the name implied, was marketed as a benefit for driving in congested urban areas.

A common use of freewheeling mechanisms is in automatic transmissions. For instance traditional, hydraulic General Motors transmissions such as the Turbo-Hydramatic 400 provide freewheeling in all gears lower than the selected gear. E.g., if the gear selector on a three-speed transmission is labelled 'drive'(3)-'super'(2)-'low'(1) and the driver has selected 'super', the transmission will freewheel if first gear is engaged, but not in second or third gears; if in 'drive' it will freewheel in first or second; finally, if in low, it will not freewheel in any gear. This allows the driver to select a lower range to achieve engine braking at various speeds, for instance when descending steep hills.

Freewheels are also used in rotorcraft. As a bicycle's wheels need to be able to rotate faster than the pedals, so do a rotorcraft's blades need to be able to spin faster than its drive engines. This is especially important in the event of an engine failure where a freewheel in the main transmission allows the main and tail rotor systems to continue to spin independent of the drive system. This provides for continued flight control and an autorotation landing.

The friction freewheel was a part of the Torpedo bicycle gear hub invented by Ernst Sachs in 1903.

A bicycle freewheel was developed and patented by cycle component manufacturer Villiers Engineering of England in 1902.

The freewheel is sometimes known as the "Stieber Clutch" named after its German developer Ortwin Stieber.