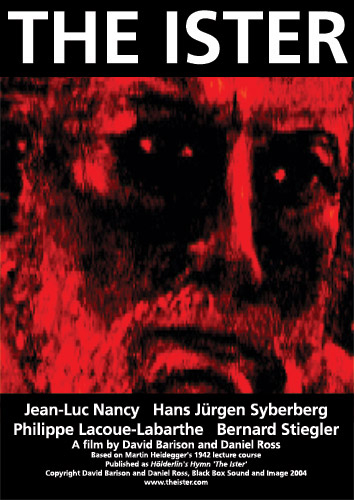 
"The Ister" is a 2004 directed by David Barison and Daniel Ross.

The film "The Ister" travels upstream along the Danube toward its source, as several interviewees discuss Heidegger, Hölderlin, and philosophy. The film is also concerned with a number of other themes, including: , , , , , , , , the Holocaust, the ancient Greek , , "Antigone", , , the 1991 , and the 1999 NATO bombing of Yugoslavia.

"The Ister" features extensive interviews with the French philosophers , , and , as well as with the German film director . Other interviews are conducted with a bridge engineer (Nemanja Calic), an amateur botanist (Tobias Maier), and a Romanian archaeologist ().

The version of the available outside also contains an extended interview with philosopher .

The film travels upriver: from the , opening onto the in , to the source of the river in the of southern , moving along the way through the archaeological site, through in , in , , , and in , and and the in . Also featured are the near , the at , the tomb of , and the castle at to which Marshal Pétain fled in 1945.

Notable places from Heidegger's own life which feature in the film include his birthplace in , his hut at , and the lecture theatre at where he delivered his infamous [http://www.eco.utexas.edu/~hmcleave/350kPEEHeideggerSelf-Assertion.pdf#search=%22%22The%20Self-Assertion%20of%20the%20German%20University%22%22 rectorate address] .

Eventually the film arrives at , and at the Breg and the , the two tributaries whose confluence marks the point at which the river becomes known as the Danube. The film then travels upstream along the Breg, past and , in search of the "true" mountain source of the Danube.

"The Ister" is divided into five chapters, plus a prologue and epilogue:
*Prologue. The myth of Prometheus, or The birth of technics. Bernard Stiegler tells the myth of Prometheus.
*Chapter 1. Now come fire! "In which the philosopher Bernard Stiegler conjugates technology and time, and guides us from the mouth of the Danube to the city of Vukovar in Croatia."
*Chapter 2. Here we wish to build. "In which the philosopher Jean-Luc Nancy takes up the question of politics and guides us through the Republic of Hungary."
*Chapter 3. When the trial has passed. "In which philosopher Philippe Lacoue-Labarthe conducts us from the technopolis of Vienna to the depths of the concentration camp at Mauthausen, confronting Heidegger's most provocative statement concerning technology."
*Chapter 4. The rock has need of cuts. "In which philosopher Bernard Stiegler returns to guide us deeper into the questions of mortality and history, as we emerge from Mauthausen to the Hall of Liberation in Germany."
*Chapter 5. What that river does, no-one knows. "In which the German artist and director Hans-Jürgen Syberberg guides us through the upper Danube, to the source of the river and beyond."
*Epilogue. Heidegger reads Hölderlin. Heidegger reads Hölderlin's hymn, "Der Ister"."