Talladega Superspeedway is a motorsports complex located north of Talladega, Alabama, United States.[1] It is located on the former Anniston Air Force Base just outside the small city of Lincoln. It was constructed by International Speedway Corporation, a business controlled by the France Family, in the 1960s. Talladega is most known for its steep banking and the location of the start/finish line which is closer to turn one than at Daytona International Speedway. The track currently hosts the NASCAR series such as the Sprint Cup Series, Nationwide Series, and the Camping World Truck Series. Talladega Superspeedway is the longest NASCAR oval with a length of 2.66 miles (4.28 km), and the track also has a seating capacity of 175,000 spectators.[2]

During 1960s Bill France was wanting to build a track faster and longer than Daytona International Speedway. He would end up breaking ground on an old airfield on May 23, 1968. The track would be named Alabama International Motor Speedway (AIMS), but the name would not carry on and was later changed to Talladega Superspeedway. The track opened on September 13, 1969 costing $4 million. The first race at the new track was unlike any other; all the original drivers abandoned the track because of tire problems which caused Bill France to hire substitute drivers. The first finish was amazing with three cars side by side with the winner being Richard Brickhouse. After the first race, Talladega would host two Sprint Cup Series races a year, one of which would become part of the 10-race Chase for the Sprint Cup. Since the opening year Talladega has hosted many races and has been repaved four times. Talladega would also have many first time winners such as Larry Schild Sr, Richard Brickhouse, Brian Vickers, and Brad Keselowski.[3] 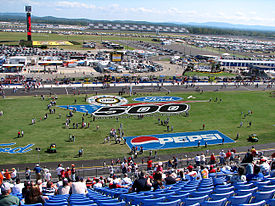 Talladega Superspeedway after the repaving of the track.

During May 2006 Talladega Superspeedway started to re-surface the track and the apron. Construction started on May 1, 2006 and lasted until September 18, 2006. The first race on the resurfaced race track was the NASCAR Craftsman Truck Series on October 7, 2006.[6]

Nicknamed "the Big One"

Speeds well in excess of 200 mph (320 km/h) were commonplace at Talladega. Talladega Superspeedway has the record for the fastest recorded time by a NASCAR stock car in a closed oval course, with the record of 216.309 mph set by Rusty Wallace on June 9, 2004.[7] Wallace circled the 2.66-mile (4.28-km) trioval in 44.270 seconds, which surpassed the previous record held by Bill Elliott (212.809 mph) set in 1987, but doesn't replace the record due to the fact it was a radio test and not a NASCAR sanctioned event. Buddy Baker was the first driver to test at a speed over 200 mph, with a 200.447 mph lap during testing on March 24, 1970. Baker's record was set while driving the #88 Chrysler Engineering Charger Daytona, which is currently undergoing restoration in Detroit, after being found in the late 1990s in Iowa. The late Benny Parsons was the first driver to qualify at over 200 mph, doing so in 1982 with a speed of 200.176 mph.

In May 1987 Bobby Allison, after a blown engine, cut his right-rear tire from the debris while going through the tri-oval portion of the track. The car was vaulted airborne. His car damaged a portion of the frontstretch catch fence, but did not enter the spectator area. NASCAR imposed rule changes to slow the cars after the incident, with a 1988 rule requiring cars running there and at Daytona to use restrictor plates. The most often cited reason is a fear that the increasing speeds were exceeding the capabilities of the tires available at the time, as high-speed tire failure had led to some gruesome crashes at slightly lower speeds. The plates limit the amount of air and fuel entering the intake manifolds of the engine, greatly reducing the power of the cars and hence their speed. This has led to an extremely competitive style of racing at Talladega and Daytona. 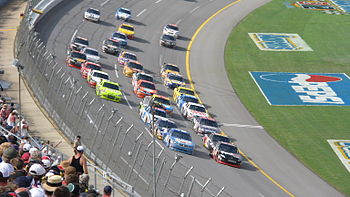 Racing at Talladega Superspeedway in 2008.

The reduced power affects not only the maximum speed reached by the cars but the time it takes them to achieve their full speed as well, which can be nearly one full circuit of the track. The racing seen at Talladega today is extremely tight; often in rows of three or four cars, and sometimes even 5 wide on the straightaways throughout most of the field, as the track is wide enough to permit such racing. Breaking away from the pack is very difficult as well.

Such close quarters, however, makes it extremely difficult for a driver to avoid an incident as it is unfolding in front of him, and the slightest mistake can lead to a multi-car accident – dubbed "the Big One" by fans and drivers. It is uncommon, but possible, to see 20 or more cars collected in the crashes.

The danger of "the Big One" can cause extensive damage to cars during a race and can affect the overall points standings, especially since the second race was moved from July to October because of the Alabama heat, and since NASCAR's playoff system now incorporates the second race, currently the AMP Energy 500. However, such wrecks also occurred before the restrictor plates were introduced.

The high number of crashes over the years, along with other factors, have led to rumors of Talladega Superspeedway being cursed. Stories of the origin of the curse vary. Some claim that a local Native American tribe held horse races in the valley where the track currently resides where a chief was killed when he was thrown from his horse. Others say that the site of the superspeedway was once an Indian burial ground. Still another version says that after the local tribe was driven out by the Creek nation for their collaborating with the forces of Andrew Jackson, a shaman put a curse on the valley.[8]

Since the construction of the track, many strange happenings and untimely deaths have fueled the rumors of a curse. In 1973, Bobby Isaac left his car during the race on lap 90 because of voices he claimed to have heard which told him to park his car and get out. Earlier on lap 14 in the same race, young driver Larry Smith died in a seemingly minor wreck. In 1974, the morning before the Winston 500, drivers and crews alike found multiple cars sabotaged by cut brake lines and sand in the gas tank.[8]

To some, Bobby Allison's 1987 wreck described above was yet another reminder of the curse. In 1993, Bobby's son, Davey Allison, died in a helicopter crash in the infield of Talladega.[8]

Talladega Superspeedway hosts many NASCAR events which include two Sprint Cup Series races, one Nationwide Series race, and one Camping World Truck Series race. The Sprint Cup Series races include the Aaron's 499, and the Talladega 500 which are both 188 laps each or 500.08 miles (804.80 km). The Nationwide Series race has historically been a 500-kilometer race (117 laps) since its 1992 inception, but was cut to 300 miles (480 km) (113 laps) in 1998 because of a spectator's letter questioning the metric distance, but restored to 500 kilometers by its current sponsor. The Camping World Truck Series race is 250 miles (94 laps). The ARCA race, once a 500 kilometer affair, was shortened to 300 miles in 1998, and to 250 miles in 2006 when it was moved to Friday.