Use of biotechnology in pharmaceutical manufacturing

Use of biotechnology in pharmaceutical manufacturing 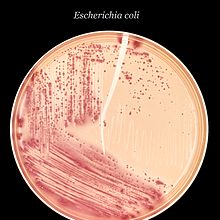 Escherichia coli bacteria, which are often utilized in production of pharmaceutical products. 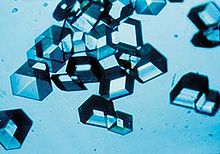 Amongst the earliest uses of biotechnology in pharmaceutical manufacturing is the use of recombinant DNA technology to modify Escherichia coli bacteria to produce human insulin, which was performed at Genentech in 1978.[1] Prior to the development of this technique, insulin was extracted from the pancreas glands of cattle, pigs, and other farm animals. While generally efficacious in the treatment of diabetes, animal-derived insulin is not indistinguishable from human insulin, and may therefore produce allergic reactions.[2] Genentech researchers produced artificial genes for each of the two protein chains that comprise the insulin molecule. The artificial genes were "then inserted... into plasmids... among a group of genes that"[1] are activated by lactose. Thus, the insulin-producing genes were also activated by lactose. The recombinant plasmids were inserted into Escherichia coli bacteria, which were "induced to produce 100,000 molecules of either chain A or chain B human insulin."[1] The two protein chains were then combined to produce insulin molecules.

The first human blood clotting factor to be produced in significant quantities using recombinant DNA technology was Factor IX, which was produced using transgenic Chinese hamster ovary cells in 1986.[7] Lacking a map of the human genome, researchers obtained a known sequence of the RNA for Factor IX by examining the amino acids in Factor IX:

The known sequence of Factor IX RNA was then used to search for the gene coding for Factor IX in a library of the DNA found in the human liver, since it was known that blood clotting factors are produced by the human liver[8]:

A unique oligonucleotide... homologous to Factor IX mRNA... was synthesized and labeled... The resultant probe was used to screen a human liver double-stranded cDNA library... Complete two-stranded DNA sequences of the... [relevant] cDNA... contained all of the coding sequence COOH-terminal of the eleventh codon (11) and the entire 3'-untranslated sequence.[7]

This sequence of cDNA was used to find the remaining DNA sequences comprising the Factor IX gene by searching the DNA in the X chromosome:

Plasmids containing the Factor IX gene, along with plasmids with a gene that codes for resistance to methotrexate, were inserted into Chinese hamster ovary cells via transfection. Transfection involves the insertion of DNA into a eukaryotic cell. Unlike the analogous process of transformation in bacteria, transfected DNA is not ordinarily integrated into the cell's genome, and is therefore not usually passed on to subsequent generations via cell division. Thus, in order to obtain a "stable" transfection, a gene which confers a significant survival advantage must also be transfected, causing the few cells that did integrate the transfected DNA into their genomes to increase their population as cells that did not integrate the DNA are eliminated. In the case of this study, "grow[th] in increasing concentrations of methotrexate"[10] promoted the survival of stably transfected cells, and diminished the survival of other cells.

The Chinese hamster ovary cells that were stably transfected produced significant quantities of Factor IX, which was shown to have substantial coagulant properties, though of a lesser degree than Factor IX produced from human blood: 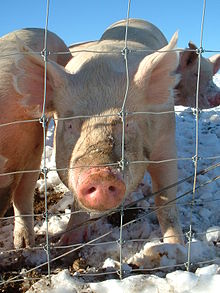 A pig, transgenic generations of which might be used to produce blood substitutes for use in humans.

Recombinant DNA techniques have also been employed to create transgenic farm animals that can produce pharmaceutical products for use in humans. For instance, pigs that produce human hemoglobin have been created. While blood from such pigs could not be employed directly for transfusion to humans, the hemoglobin could be refined and employed to manufacture a blood substitute.[13]