The Uganda Peoples Defence Force (UPDF), previously the National Resistance Army, is the armed forces of Uganda. The International Institute for Strategic Studies estimates the UPDF has a total strength of 40–45,000, and consists of land forces and an Air Wing.[2]

The IISS Military Balance 2007 says there are 1,800 paramilitary personnel also, which include the Marines—Uganda's naval force—with 400 personnel, and eight riverine patrol craft, all of less than 100 tonnes. There is also a 800-strong Uganda Police Force Air Wing with one Bell JetRanger, and a 600-strong Border Defence Unit equipped only with small arms.

The origins of the present Ugandan armed forces can be traced back to 1902, when the Uganda Battalion of the King's African Rifles was formed. On 9 October 1962 Uganda became independent from the United Kingdom, with 4th Battalion, King's African Rifles becoming the Uganda Rifles.[3] On 23 January 1964 1st Battalion, Uganda Rifles, plus the embryonic 2nd Battalion mutinied, seizing its British officers. Following an invitation from President Milton Obote, British forces from Kenya (elements of the 24th Infantry Brigade) intervened later the same day, and two days later brought the mutiny to an end.

In 1970, the International Institute for Strategic Studies assessed the Ugandan armed forces to consist of 6,700 personnel, constituting an Army of 6,250 with two brigade groups, each of two battalions, plus an independent infantry battalion, with some Ferret armoured cars, and BTR-40 and BTR-152 armoured personnel carriers, plus an air arm of 450 with 12 Fouga Magister armed jet trainers, and seven MiG-15s and MiG-17s.[4]

In 1979, before the Uganda-Tanzania War, the Ugandan armed forces were reported, by the IISS, as consisting of 20,000 land forces personnel, with two four-battalion brigades and five other battalions of various types, plus a training regiment.[5] There were a total of 35 T-34, T-55, and M-4 Sherman medium tanks. An air arm was 1,000 strong with 21 MiG-21 and 10 MiG-17 combat aircraft. The IISS noted that the Ugandan armed forces collapsed in the face of the Tanzanian onslaught and the serviceable aircraft were removed to Tanzania.

After the Museveni government was formed in 1986, a number of key Rwanda Patriotic Front personnel became part of the National Resistance Army that became Uganda's new national armed forces. Fred Rwigema was appointed deputy minister of defense and deputy army commander-in-chief, second only to Museveni in the military chain of command for the nation. Paul Kagame was appointed acting chief of military intelligence. Other Tutsi refugees were highly placed: Peter Baingana was head of NRA medical services and Chris Bunyenyezi was the commander of the 306th Brigade,[6] while Adam Wasswa was the Commander of the 316th Brigade at Moroto in northern Uganda, Steven Ndugutse was commander of the 79th Battalion, and Sam Kaka was Military Police Commander.[citation needed] Tutsi refugees formed a disproportionate number of NRA officers for the simple reason that they had joined the rebellion early and thus had accumulated more experience.[6]

The National Resistance Army was renamed the Uganda People's Defence Force following the enactment of the 1995 Constitution of Uganda. UPDF's primary focus was the conflict with the Lord's Resistance Army (LRA), a rebel group operating in the country's North which has been condemned by the UN and was designated a terrorist organization by the U.S. government in 2001. Since March 2002 UPDF has been granted permission to carry out operating against LRA bases across the border in the Sudan, and these raids, collectively known as Operation Iron Fist, have resulted in the repatriation of many abducted children being held by the rebels as child soldiers or sex slaves. However the LRA was totally defeated and pushed deep into the jungles of The Central Africa Republic and Congo.

The UPDF has also been the subject of controversy for having a minimum age for service of 13. Many international organizations have condemned this as being military use of children. This has created an image problem for the UPDF and may have impacted the international aid Uganda receives. Western nations have sent a limited level of military aid to Uganda.[7] As of 2003 at least, there was a severe problem of 'ghost' soldiers within the UPDF.[8] As of 2008, these personnel problems has been exacerbated by the surge of UPDF troops resigning to go to work with the Coalition Forces in Iraq.[9] They mostly work as an additional guard force at control points and dining facilities, for example.

Prior to 2000, the United States armed forces trained together with the UPDF as part of the African Crisis Response Initiative. This cooperation was terminated in 2000 as a result of Uganda's incursion into the Democratic Republic of the Congo (DRC). Following the June 2003 UPDF withdrawal of troops from the DRC, limited nonlethal military assistance has restarted. The UPDF participates in the African Contingency Operations Training and Assistance programme with the United States. 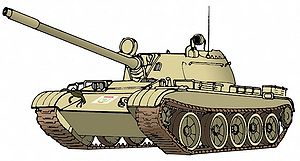 After several interventions in the Congo, the UPDF was involved in a further incursion there from December 2008, stretching into February 2009, against the Lord's Resistance Army in the Garamba area. UPDF special forces and artillery, supported by aircraft, were joined by the Congolese FARDC and elements of the Sudan People's Liberation Army. Called 'Operation Lightning Thunder' by the UPDF, it was commanded by Brig. Patrick Kankiriho, commander of 3rd Division.[10]

The UPDF has up to 5,000 soldiers serving with AMISOM in Somalia as of 2011. The commander there, Major General Nathan Mugisha, was wounded in a car bomb attack on 17 September 2009 which left nine soldiers dead.[11]

The IISS Military Balance 2007 estimates that the land forces include five divisions (each with up to five brigades), one armoured and one artillery brigade. The divisions are the 1st at Kakiri in Wakiso District, the 2nd, HQ at Mbarara, the 3rd (HQ Mbale),[13] the 4th with its headquarters at Gulu,[14] and the 5th at Pader. The armoured brigade appears to be at Masaka.[15]

The 2nd Division, according to afdevinfo.com, includes the divisional headquarters at Mbarara, the 17th, 69th, 73rd, and 77th Battalions, the Rwenzori Mountain Alpine Brigade, possibly another Alpine brigade, and the 3rd Tank Battalion, and has been heavily involved with border operations since the Congo Civil War began in the 1990s.

There are conflicting reports on what aircraft the Air Wing has in service.

The UDPF Water Wing has 400 personnel, and eight riverine patrol craft, all of less than 100 tonnes. Its main mission is to patrol Lake Victoria and the Nile River.

A UPDF escort for a World Food Programme convoy in northern Uganda.

Out of service equipment