Momart is a British company specialising in the storage, transportation, and installation of works of art. It has been owned by Falkland Islands Holdings since 5 March 2008.

A major proportion of their business is maintaining (often delicate) artworks in a secure, climate-controlled environment. The company maintains two warehouse facilities adapted for this task. Momart's clients include the Saatchi Gallery, National Gallery, Tate Modern, Tate Britain and Buckingham Palace. The company received considerable media attention in 2004 when a fire spread to one of their warehouses from an adjacent unit, destroying the works in it, including works by Young British Artists such as Tracey Emin and Damien Hirst, with the most notable work lost being Emin's 1995 piece Everyone I Have Ever Slept With 1963–1995.

In the evening of 24 May 2004 fire broke out in a Momart storage warehouse in Leyton, east London.

The warehouse was in the centre of a large industrial building that also housed other businesses around the periphery.

The central warehouse was sublet from a household moving company. Arson investigators determined that burglars started the fire in an attempt to cover up the theft of consumer electronics from one of the other businesses in the building.

The blaze, which continued to smoulder for nearly a day, destroyed almost all of the artworks stored within. As well as works from other collections, items from the Saatchi collection of so-called Britart were lost. Charles Saatchi later commented "Many of these pieces are great personal favourites and irreplaceable in British Art." Some of the artists themselves were, however, more reticent; Tracey Emin admitted "I'm upset, but I'm also upset about those whose wedding got bombed [in Iraq, on May 19], and people being dug out from mud in the Dominican Republic."

Other collectors who lost art treasures included the author Shirley Conran and the artist Gillian Ayres.

Art industry insiders noted that the insurance value of the works lost in the fire, particularly the "Britart" works in Saatchi's collection, would be many times their initial purchase price, and that a comparable rise could be expected in the market values of the remaining (and future) works by artists whose works were lost. One art insurance specialist valued the lost work at £50m.

Uri Geller visited the site "with a shovel and a roll of garden bin-liners" to salve the remains. Entitled "RIP YBA" the remains were housed in perspex containers as a memorial by the contemporary artist Stuart Semple, as a commission by Geller. The work was subsequently offered to the Tate after several bids were rejected, creating a legal debate concerning the ownership of the remains from the fire.[1]

Christopher Redgrave, son of William Redgrave, whose major sculpture The Event was in the fire, visited twice and manage to retrieve over 30 out of 228 bronze figures, though cutting his hands badly in the process. He described the scene:

As far as is known he is the only person out of the artists or artists' relatives to have been to the site; he said, "this building was inappropriate for what they are doing. There's no way around that." [2]

We didn't have to think very hard. Our work burns, the company comes to us: there's a trajectory. What else could we do, but come up with the idea of a Zippo lighter with the word Momart on it?. 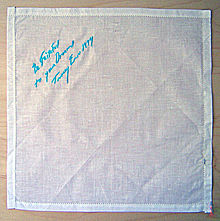 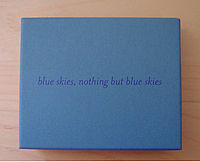 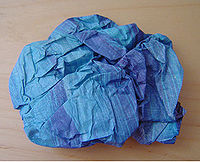 Since 1984 they have commissioned a well-known contemporary British artist to create a limited edition Christmas card which was given to their major clients. The artists represented in past Christmas cards are: