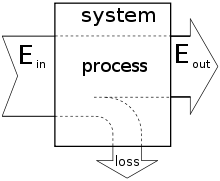 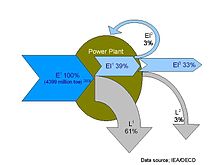 Energy conversion efficiency is not defined uniquely, but instead depends on the usefulness of the output. All or part of the heat produced from burning a fuel may become rejected waste heat if, for example, work is the desired output from a thermodynamic cycle.

Even though the definition includes the notion of usefulness, efficiency is considered a technical or physical term. Goal or mission oriented terms include effectiveness and efficacy.

Generally, energy conversion efficiency is a dimensionless number between 0 and 1.0, or 0 to 100%. Efficiencies may not exceed 100%, e.g., for a perpetual motion machine. However, other effectiveness measures that can exceed 1.0 are used for heat pumps and other devices that move heat rather than convert it.

When talking about the efficiency of heat engines and power stations the convention should be stated, i.e., HHV (aka Gross Heating Value etc.) or LCV (aka Net Heating value), and whether gross output (at the generator terminals) or net output (at the power station fence) are being considered. The two are separate but both must be stated. Failure to do so causes endless confusion.

In Europe the usable energy content of fuel is typically calculated using the lower heating value (LHV) of that fuel, which definition assumes that the water vapor produced during fuel combustion (oxidation), remains gaseous, and is not condensed to liquid water so the latent heat of vaporization of that water is not usable. Using the LHV, a condensing boiler can achieve a "heating efficiency" in excess of 100% ( this does not violate the first law of thermodynamics as long as the LHV convention is understood, but does cause confusion). This is because the apparatus recovers part of the heat of vaporization, which is not included in the definition of the lower heating value of fuel. In the U.S. and elsewhere, the higher heating value (HHV) is used, which includes the latent heat for condensing the water vapor, and thus the thermodynamic maximum of 100% efficiency cannot be exceeded with HHV's use.