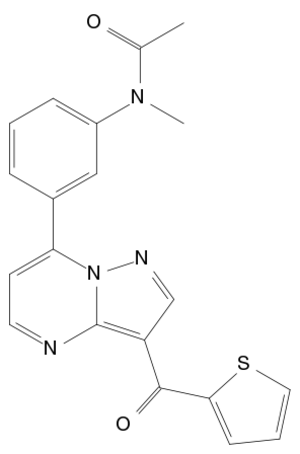 Indiplon (INN and USAN) is a , being developed in 2 formulations - an immediate release product for sleep onset and a modified-release version for sleep maintenance.

Indiplon is said to work by enhancing the action of the inhibitory neurotransmitter , like most other nonbenzodiazepine sedatives. It primarily binds to the α1 subunits of the GABAA receptors in the brain.

Indiplon was originally scheduled for release to doctors and pharmacies sometime in , most likely in the springtime of that year, which is when ' popular sleep aid, , lost its patent rights in the United States and thus became available to patients as a much less expensive generic. had planned to comarket indiplon in the US with . However, following the issuing of a nonapprovable letter for the modified-release 15mg formulation and an approvable letter (with stipulations) for the 5mg and 10mg immediate-release version by the FDA (), decided to end its relationship with Neurocrine.Fact|date=December 2007

On , , Neurocrine announced that the FDA deemed their (NDA) 'approvable'.

A recent analysis of and clinical trial data shows that Z-drugs cause in . The data shows that trial subjects receiving had an increased the risk of developing cancer and . There have been 15 studies which have shown that drugs cause increased , mainly due to increased cancer deaths. The cancers included cancer of the , , , , and , and . Initially FDA reviewers did not want to approve the drugs due to concerns of cancer but ultimately changed their mind and approved the drugs despite the concerns. FDA data has shown that zolpidem, zaleplon and eszopiclone are and cause cancer in rodents. Benzodiazepine agonists are associated with an increased risk of in humans.
was reportedly refused a product license by the due to indications that zopiclone caused cancer.Development of a malignant neoplasm has been associated with usage but the rate of incidence of neoplasm in zolpidem users is as yet unknown. The rates, in clinical trials for the nonbenzodiazepine Z drugs, of malignancies and neoplasms are significantly higher in hypnotic groups than in placebo groups. Also the analysis of clinical trials and FDA data showed that , , and appeared to have an adverse effect on the causing an increased rate of infections and colds in hypnotic users. Suppression of immune function might be the cause of the increased rate of cancer in nonbenzodiazepine hypnotic users. Indiplon has also shown an increased rate of cancers in clinical trials.The review author concluded saying; "the likelihood of cancer causation is sufficiently strong now that and should be warned that possibly place patients at higher risk for ". [cite journal | last = Kripke | first = Daniel F | year = 2008 | title = Evidence That New Hypnotics Cause Cancer | journal = Department of Psychiatry, UCSD | publisher = University of California | url = http://repositories.cdlib.org/cgi/viewcontent.cgi?article=1002&context=ucsdpsych | format = PDF | quote = the likelihood of cancer causation is sufficiently strong now that physicians and patients should be warned that hypnotics possibly place patients at higher risk for cancer. ]