Atlantic bluefin tuna are capable of reaching well over 450 kilograms (990 lb) in weight, and rival the black marlin and blue marlin as the largest Perciformes. Throughout recorded history, the Atlantic bluefin tuna has been highly prized as a food fish. Bluefin have been a valuable commercial catch from the time of the ancient Greeks and Phoenicians to the modern era. Besides their commercial value as food, their great size and the speed and power they display as apex predators has attracted the admiration and respect of both ancient and modern fishermen, as well as writers, sport anglers and scientists.

The Atlantic bluefin tuna has been the foundation of one of the world's most lucrative commercial fisheries. Medium-sized and large individuals are heavily targeted for the Japanese raw fish market, where all bluefin species are highly prized for sushi and sashimi. This commercial importance has led to severe overfishing. The International Commission for the Conservation of Atlantic Tunas (ICCAT) affirmed in October 2009 that Atlantic bluefin tuna stocks have declined dramatically over the last 40 years, by 72% in the Eastern Atlantic, and by 82% in the Western Atlantic.[1] On October 16, 2009 Monaco formally recommended Endangered Atlantic bluefin tuna for an Appendix I CITES listing and international trade ban. In early 2010, European officials, led by the French ecology minister, increased pressure to ban the commercial fishing of bluefin tuna internationally.[2] European Union nations, who are responsible for most bluefin tuna overfishing, later abstained from voting to protect the species from international trade.[3]

Bluefin are captured for the commercial market by professional fishermen using purse seine gear, assorted hook-and-line gear, most importantly the longline, and in certain areas by harpooners. Atlantic bluefin are also taken commercially by heavy rod and reel gear. Since the 1930s the bluefin tuna has long been one of the most important big-game species sought by sports fishermen, particularly in the United States but also in Canada, Spain, France and Italy. 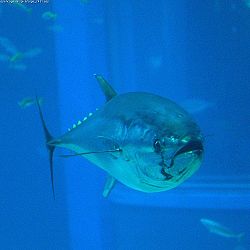 A northern bluefin tuna at the Osaka Aquarium Kaiyukan, Japan

Bluefin tuna were often referred to as the common tunny, especially in the UK, Australia and New Zealand. The name 'tuna', a derivative of the Spanish 'atun' was widely adopted in California in the early 1900s and has since become accepted for all tunas, including the bluefin, throughout the English-speaking world. In some languages the bluefin's name refers to its red meat - atun roja (Spanish); and tonno rosso (Italian), amongst others.

The body of the northern bluefin tuna is rhomboidal in profile and robust. The head is conical and the mouth rather large. The color is dark blue above and gray below with a gold coruscation covering the body and bright yellow caudal finlets. Bluefin tuna can be distinguished from other family members by the relatively short length of their pectoral fins. Their livers have a unique characteristic in that they are covered with blood vessels (striated). In other tunas with short pectoral fins, such vessels are either not present or present in small numbers along the edges.

Atlantic bluefin tuna can live for 30 years, but due to heavy fishing mortality, few known specimens grow to a mature age.

Fully mature adult specimens average 2–2.5 metres (6 ft 7 in–8 ft 2 in) long and around 350 kilograms (770 lb) in weight. The species can reach a maximum length of about 4.3 metres (14 ft). The largest recorded specimen taken under International Game Fish Association rules was caught off Nova Scotia, an area renowned for huge Atlantic bluefin, by Ken Fraser and weighed 679 kilograms (1,500 lb). According to Gordon Johnston's 'It Happened in Canada'[4] the longest contest between man and tuna fish occurred near Liverpool, Nova Scotia in 1934, when 6 men, taking turns, fought the 795-lb tuna in a terrific battle that lasted sixty-two hours.

The bluefin possesses enormous muscular strength which it channels through a pair of tendons to the sickle shaped tail. In contrast to many other fish, the body stays rigid while the tail flicks back and forth, increasing stroke efficiency.[5]

To keep its core muscles warm (used for power and steady swimming), the northern bluefin uses countercurrent exchange to prevent heat from being lost to the surrounding water. The heat in the arterial blood transfers to the venous blood. This keeps the core muscles warm so they can function efficiently.[6]

All members of the tuna family have the ability to thermoregulate. This ability, however, is more highly developed in bluefin tuna than in any other fish, allowing them to seek food in the chilly waters of the north Atlantic

Bluefin tuna have a very efficient circulatory system. It possesses one of the highest blood hemoglobin concentrations among fish, which allows them to efficiently deliver oxygen to their tissues; this is combined with their exceptionally thin blood-water barrier to ensure rapid oxygen uptake.[6]

The tetraphyllidean tapeworm Pelichnibothrium speciosum parasitizes this species (Scholz et al. 1998). As the tapeworm's definite host is the blue shark which does not generally seem to feed on tuna[citation needed], it is likely that the northern bluefin tuna is a dead-end host for P. speciosum.

Female bluefin are thought to produce up to 30 million eggs.

Atlantic bluefin tuna spawn in two widely separated areas. One spawning ground exists in the western Mediterranean, particularly in the area of the Balearic Islands. The other important spawning ground of the Atlantic bluefin is the Gulf of Mexico. Pop-up satellite tracking results appear to confirm in large measure the belief held by many scientists and fishermen that although bluefin that were spawned in each area may forage widely across the Atlantic, they return to the same area to spawn. Tuna have also been deemed the term "Chicken of the Sea" due to the rapid reproduction habits.

Atlantic bluefin group together in large concentrations to spawn, and at such times are highly vulnerable to commercial fishing. This is particularly so in the Mediterranean where the groups of spawning bluefin can be spotted from the air by light aircraft and purse seines directed to set around the schools.

The western and eastern populations of Atlantic bluefin tuna are thought to mature at different ages. It is thought that bluefin born in the east reach maturity a year or two earlier than those spawned in the west.[7]

The bluefin species is listed by the Monterey Bay Aquarium on its Seafood Watch list and pocket guides as a fish to avoid due to overfishing.[8]

This tuna is one of the most highly-prized fish used in Japanese raw fish dishes. Bluefin tuna sashimi is a particular delicacy in Japan where at one auction, a single giant tuna sold for more than $100,000 (£80,000) on the Tsukiji fish market in Tokyo.[9][10] The bluefin tuna (including Pacific and Southern fisheries) supports a $7.2 billion industry. In January 2009, a 440 pounds (200 kg) bluefin sold for $173,000. In January 2010, a 232 kilograms (510 lb) bluefin sold for nearly $180,000 at auction in Tokyo, Japan.[11] In January 2011 the 754 pound tuna sold on the Tsukiji fish market in Tokyo for US$396,700 - the highest price for a single fish since records began in 1999.[12] The highest prices in the Japanese market tend to be for Pacific bluefin tuna caught in Japanese waters, but high-grade Atlantic bluefin, particularly from Canada and Boston, also fetch high prices. Prices were highest in the late 1970s and 1980s. Market entry by many North African Mediterranean countries, such as Tunisia and Libya in the 1990s, along with the increasingly widespread practice of tuna farming in the Mediterranean and other areas such as southern Australia (for southern bluefin tuna) depressed prices. One result is that fishermen must now catch up to twice as many fish to maintain their revenues.[citation needed]

Prior to the 1960s, Atlantic bluefin fisheries were relatively small scale, and populations remained stable. Although some local stocks, such as those in the North Sea, were decimated by unrestricted commercial fishing, other populations were not at risk. However, in the 1960s purse seiners catching fish for the canned tuna market in United States coastal waters removed huge numbers of juvenile and young Western Atlantic bluefin, taking out several entire year classes. Mediterranean fisheries have historically been poorly regulated and catches under-reported, with French, Spanish, Italian fishermen competing with North African nations for a diminishing population.[citation needed]

] captured young fish and raised them in pens. In captivity, they grow to reach hundreds of kilos, eventually fetching premium prices in Japan. Farming enables farmers to exploit the unpredictable supply of wild-caught fish. Ranches across the Mediterranean and off South Australia grow bluefin offshore. Annual revenues are $220 million. A large proportion of juvenile and young Mediterranean fish are taken to be grown on tuna farms. Because the tuna are taken before they are old enough to reproduce[who?], farming is one of the most serious threats to the species.[citation needed] The bluefin's slow growth and late sexual maturity compound its problems. The Atlantic population has declined by nearly 90 percent since the 1970s.[13]

The 2010 Gulf of Mexico oil spill may threaten the spawning grounds of the bluefin tuna.[14]

On March 18, 2010 the United Nations rejected a US-backed effort to impose a total ban on Atlantic Bluefin tuna fishing and trading.[16] The Convention on International Trade in Endangered Species (CITES) vote was 68 to 20 with 30 European abstentions. The leading opponent, Japan, claimed that ICCAT was the proper regulatory body.[3]

In 2011, the USA's National Oceanic and Atmospheric Administration (NOAA) decided not to list the Northern bluefin tuna as an endangered species. It is still considered a "species of concern," but NOAA officials believe that the more stringent international fishing rules created in November 2010 will be enough for the Northern bluefin tuna to recover. The NOAA will reconsider the species endangered status in 2013.[17]

In 2009, aquaculturists succeeded in breeding bluefin in captivity and keeping them alive through their development from larvae to fingerlings to young juveniles.[18]

The northern bluefin tuna is depicted on the reverse of the Croatian 2 kuna coin, minted since 1993.[19]