"A Little Less Conversation" is a song (written by songwriter ) originally recorded by for the movie "" in . It was released by as a single, but the release was only a moderate success, indicative of the diminishing returns of Presley's movie recordings at that time.

Soon after the release of the single, Presley re-recorded the song for the soundtrack of "", though this track was not used in the program and would circulate on bootlegs for years before being officially released by RCA in the 1990s.

One can hear Elvis sing the song in-between takes during his 1969 Memphis Recording sessions, meaning that he still remembered the song one year after recording it. It is rather unusual as Elvis recorded many songs each year. Moreover, the song had gone nowhere on the charts in late 1968 and was regarded as a second-rate song from a second-rate movie.

The original song was one of several Elvis songs featured in the film "" starring Kurt Russell and Kevin Costner.

In , the "Comeback Special" version of the song was featured by David Holmes and in the film , which popularized it and solidified it as a 'Vegas' theme.

The first stanza of the original version is the opening theme of the broadcast version (in some countries, including the U.S.) of the NBC television series, "Las Vegas," but is not featured on the DVDs. This song was used as 's campaign theme song for his 2004 presidential campaign. [http://www.slate.com/id/2083791/]

The song sprang to a yet new life during a crazed dance routine, as showcased by "" contestants and , as well as a result of its being played during Robert and Amy's ( and ) first dance in the wedding episode of the popular sitcom "" that was aired , .

In February 2007, it became the official theme song of the 2007 NBA All-Star Game in Las Vegas. 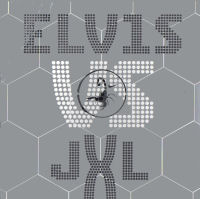 In , it was remixed by and went on to become a Number 1 hit in over 20 countries. At about the same time, a compilation of Presley's U.S. Number 1 chart hits, entitled "", was being prepared for release. "A Little Less Conversation" (Remix Version) was quickly added as the album's 31st track just before its release in .

The remixed song was used by Nike as the background music to a series of TV commercials directed by featuring international football stars in conjunction with the . It was also used on 's European adaptation of their flagship dancing simulation VG , on the soundtrack of .