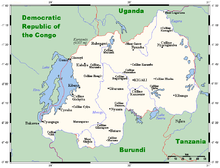 Rwanda's cities and towns along with selected villages

Rwanda is a landlocked country located in Central Africa, to the east of the Democratic Republic of the Congo. Its countryside consists of grasslands and rolling hills, and it has a temperate climate.

Rwanda has an area of 26 thousands square kilometers, of which 3 percent is water.

Although Rwanda is located only two degrees south of the equator, Rwanda's high elevation makes the climate temperate. The average daily temperature near Lake Kivu, at an altitude of 4,800 feet (1,463 m) is 73 °F (22.8 °C). During the two rainy seasons (February-May and September-December), heavy downpours occur almost daily, alternating with sunny weather. Annual rainfall averages 800 mm (31.5 in) but is generally heavier in the western and northwestern mountains than in the eastern savannas.

Natural hazards in Rwanda include periodic droughts and the volcanic activity of the Virunga Mountains, located in the northwest of the country, along the border with the Democratic Republic of the Congo.

Current issues concerning the environment in Rwanda include: the result of uncontrolled deforestation for fuel, overgrazing, soil exhaustion and widespread poaching.

Rwanda is a party to the following international agreements:

Rwanda has signed, but not ratified the United Nations Convention on the Law of the Sea.

This is a list of the extreme points of Rwanda, the points that are farther north, south, east or west than any other location.