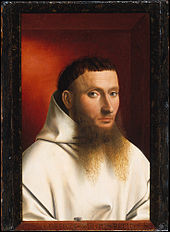 Denis the Carthusian (1402–1471), also known as Denys van Leeuwen or Denis Ryckel, was a Roman Catholic theologian and mystic.

Denis was born in 1402 in that part of the Belgian province of Limburg which was formerly comprised in the county of Hesbaye. His birthplace was Rijkel, a small village a few miles from Sint-Truiden, whence ancient writers have often surnamed him 'Ryckel' or 'à Ryckel'.

He first attended school at Sint-Truiden. In 1415 he went to another school at Zwolle (Overijssel), which was then of great repute and attracted many students from various parts of Germany. He there entered upon the study of philosophy and became acquainted with the principles and practice of religious life, which the rector, John Cele, himself taught. Shortly after the rector's death (1417) Denis returned home, and at the age of 18 entered the University of Cologne to study philosophy and theology. Having earned his Master of Arts degree, he entered the Carthusian monastery at Roermond (Dutch Limburg) in 1423.

To refute Islam he wrote two treatises: "Contra perfidiam Mahometi", at the request of Cardinal Nicholas of Cusa. The latter, named papal legate by Nicholas V to reform the Church in Germany and to preach a crusade against the Turks, took Denys with him during a part, if not the whole, of his progress (January 1451 - March 1452), and received from his tongue and his pen valuable assistance, especially in the work of reforming monasteries and of rooting out magical and superstitious practices.

He was for some time (about 1459) procurator of his monastery, and in July, 1466, was appointed to superintend the building of a monastery at 's-Hertogenbosch. A three-year struggle against the difficulties of the new foundation broke down his health, already impaired by work and privations, and he was obliged to return to Roermond in 1469. His treatise "De Meditatione" bears the date of the same year and was the last he wrote.

Posterity has surnamed him Doctor ecstaticus. While still a novice he had ecstasies which lasted two or three hours, and later on they lasted sometimes seven hours and more. During his ecstasies many things were revealed to him which he made known only when it could profit others, and the same may be said of what he learnt from the souls in purgatory, who appeared to him very frequently. In physical austerities, he was assisted by a strong constitution, for he was a man of athletic build and had, as he said, "an iron head and a brazen stomach".

During the last two years of his life he suffered intensely and with heroic patience from paralysis, the stone, and other infirmities. He had been a monk for forty-eight years when he died at the age of sixty-nine.

Upon his remains being disinterred one hundred and thirty-seven years after, day for day (12 March 1608), his skull emitted a sweet perfume and the fingers he had most used in writing, i.e. the thumb and forefinger of the right hand, were found in a perfect state of preservation. Although the cause of his beatification has never yet been introduced, St. Francis de Sales, St. Alphonsus Liguori, and other writers style him "Blessed"; his life is in the Acta Sanctorum of the Bollandists (12 March), and his name is to be found in many martyrologies.

His works make up twenty-five folio volumes. He took not more than three hours' sleep a night, and that he was known to spend sometimes whole nights in prayer and study. He began (1434) by commenting the Psalms and then went on to comment the whole of the Old and the New Testament.

He commented also the works of Boethius, Peter Lombard, John Climacus, as well as those of, or attributed to, Pseudo-Dionysius the Areopagite, and translated Cassian into easier Latin. After seeing one of his commentaries Pope Eugene IV exclaimed: "Let Mother Church rejoice to have such a son!"

He wrote theological treatises, such as his "Summa Fidei Orthodoxæ"; "Compendium Theologicum", "De Lumine Christianæ Theoriæ", "De Laudibus B. V. Mariæ", and "De Præconio B. V. Mariæ" (in both of which treatises he upholds the doctrine of the Immaculate Conception), "De quatuor Novissimus", etc.; philosophical treatises, such as his "Compendium philosophicum", "De venustate mundi et pulchritudine Dei" (a most remarkable æsthetic dissertation), "De ente et essentiâ", etc.; a great many treatises relating to morals, asceticism, church discipline, liturgy, etc.; sermons and homilies for all the Sundays and festivals of the year, etc.

His writings, taken as a whole, show him to be a compiler rather than an original thinker. He had a decided dislike for metaphysical subtleties of no positive use. As an expounder of Scripture, he generally does no more than reproduce or recapitulate what other commentators had said before him.

As a theologian and a philosopher he belongs to no particular school. Although an admirer of Aristotle and Aquinas, he is neither an Aristotelian nor a Thomist in the usual sense of the words, but seems inclined rather to the Christian Platonism of Pseudo-Dionysius the Areopagite, St. Augustine, and St. Bonaventure. As a mystical writer he is akin to Hugh and Richard of St Victor, St. Bonaventure, and the writers of the Windesheim School, and in his treatises may be found summed up the doctrine of the Fathers of the Church, especially of Pseudo-Dionysius the Areopagite, and of Meister Eckart, Henry Suso, John of Ruysbroeck, and other writers of the German and Flemish Schools.

He has been called the last of the Schoolmen. He is so in the sense that he is the last important Scholastic writer, and that his works may be considered to form a vast encyclopedia, a complete summary of the Scholastic teaching of the Middle Ages; this is their primary characteristic and their chief merit.

He was consulted as an oracle by men of different social standing, from bishops and princes downwards; they flocked to his cell, and letters came to him from all parts of the Netherlands and Germany. The topic of such correspondence was often the grievous state of the Church in Europe, i. e. the evils ensuing from relaxed morals and discipline and from the invasion of Islam. Soon after the fall of Constantinople (1453), impressed by revelations God made to him concerning the terrific woes threatening Christendom, he wrote a letter to all the princes of Europe, urging them to amend their lives, to cease their dissensions, and to join in war against their common enemy, the Turks. A general council being in his eyes the only means of procuring serious reform, he exhorted all prelates and others to unite their efforts to bring it about.

He wrote also a series of treatises, laying down rules of Christian living for churchmen and for laymen of every rank and profession. "De doctrinâ et regulis vitæ Christianæ", the most important of these treatises, was written at the request, and for the use, of the Franciscan preacher John Brugman. These and others which he wrote of a similar import, inveighing against the vices and abuses of the time, insisting on the need of a general reform, and showing how it was to be effected, give an insight into the customs, the state of society, and ecclesiastical life of that period.