Diffuse and specular reflection from a glossy surface[1]

Diffuse reflection is the reflection of light from a surface such that an incident ray is reflected at many angles rather than at just one angle as in the case of specular reflection. An illuminated ideal diffuse reflecting surface will have equal luminance from all directions in the hemisphere surrounding the surface (Lambertian reflectance).

A surface built from a non-absorbing powder such as plaster, or from fibers such as paper, or from a polycrystalline material such as white marble, reflects light diffusely with great efficiency. Many common materials exhibit a mixture of specular and diffuse reflection.

The visibility of objects is primarily caused by diffuse reflection of light: it is diffusely-scattered light that forms the image of the object in the observer's eye. 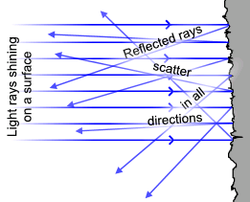 The most general mechanism by which a surface gives diffuse reflection does not involve exactly the surface: most of the light is contributed by scattering centers beneath the surface,[2][3] as illustrated in Figure 1 at right. If one were to imagine that the figure represents snow, and that the polygons are its (transparent) ice crystallites, an impinging ray is partially reflected (a few percent) by the first particle, enters in it, is again reflected by the interface with the second particle, enters in it, impinges on the third, and so on, generating a series of "primary" scattered rays in random directions, which, in turn, through the same mechanism, generate a large number of "secondary" scattered rays, which generate "tertiary" rays....[4] All these rays walk through the snow crystallytes, which do not absorb light, until they arrive at the surface and exit in random directions.[5] The result is that all the light that was sent out is returned in all directions, so that snow is seen to be white, in spite of the fact that it is made of transparent objects (ice crystals).

For simplicity, "reflections" are spoken of here, but more generally the interface between the small particles that constitute many materials is irregular on a scale comparable with light wavelength, so diffuse light is generated at each interface, rather than a single reflected ray, but the story can be told the same way.

This mechanism is very general, because almost all common materials are made of "small things" held together. Mineral materials are generally polycrystalline: one can describe them as made of a 3-D mosaic of small, irregularly shaped defective crystals. Organic materials are usually composed of fibers or cells, with their membranes and their complex internal structure. And each interface, inhomogeneity or imperfection can deviate, reflect or scatter light, reproducing the above mechanism.

Few materials don't follow it: among them metals, which do not allow light to enter; gases, liquids; glass and transparent plastics (which have a liquid-like amorphous microscopic structure); single crystals, such as some gems or a salt crystal; and some very special materials, such as the tissues which make the cornea and the lens of an eye. These materials can reflect diffusely, however, if their surface is microscopically rough, like in a frost glass (figure 2), or, of course, if their homogeneous structure deteriorates, as in the eye lens.

Virtually all materials can give specular reflection, provided that their surface can be polished to eliminate irregularities comparable with light wavelength (a fraction of micrometer). A few materials, like liquids and glasses, lack the internal subdivisions which give the subsurface scattering mechanism described above, so they can be clear and give only specular reflection (not great, however), while, among common materials, only polished metals can reflect light specularly with great efficiency (the reflecting material of mirrors usually is aluminum or silver). All other common materials, even when perfectly polished, usually give not more than a few percent specular reflection, except in particular cases, such as grazing angle reflection by a lake, or the total reflection of a glass prism, or when structured in a complex purposely made configuration, such as the silvery skin of many fish species.

Diffuse reflection from white materials, instead, can be highly efficient in giving back all the light they receive, due to the summing up of the many subsurface reflections.

Up to now white objects have been discussed, which do not absorb light. But the above scheme continues to be valid in the case that the material is absorbent. In this case, diffused rays will lose some wavelengths during their walk in the material, and will emerge colored.

More, diffusion affects in a substantial manner the color of objects, because it determines the average path of light in the material, and hence to which extent the various wavelengths are absorbed.[6] Red ink looks black when it stays in its bottle. Its vivid color is only perceived when it is placed on a scattering material (e.g. paper). This is so because light's path through the paper fibers (and through the ink) is only a fraction of millimeter long. Light coming from the bottle, instead, has crossed centimeters of ink, and has been heavily absorbed, even in its red wavelengths.

And, when a colored object has both diffuse and specular reflection, usually only the diffuse component is colored. A cherry reflects diffusely red light, absorbs all other colors and has a specular reflection which is essentially white. This is quite general, because, except for metals, the reflectivity of most materials depends on their refraction index, which varies little with the wavelength (though it is this variation that causes the chromatic dispersion in a prism), so that all colors are reflected nearly with the same intensity. Reflections from different origin, instead, may be colored: metallic reflections, such as in gold or copper, or interferential reflections: iridescences, peacock feathers, butterfly wings, beetle elytra, or the antireflection coating of a lens.

Looking at the surrounding environment, one sees that what makes the human eye to form an image of almost all things visible is the diffuse reflection from their surface. With few exceptions, such as black objects, glass, liquids, polished or smooth metals, some small reflections from glossy objects, and the objects that themselves emit light: the Sun, lamps, and, computer screens (which, however, emit diffuse light). Outdoors it is the same, with perhaps the exception of a transparent water stream or of the iridescent colors of a beetle, and with the addition of other types of scattering: blue (or, at sunset, variously colored) light from the sky molecules (Rayleigh scattering), white from the water droplets of clouds (Mie scattering).

Light scattering from the surfaces of objects is by far the primary mechanism by which humans physically observe.[7][8]

Diffuse interreflection is a process whereby light reflected from an object strikes other objects in the surrounding area, illuminating them. Diffuse interreflection specifically describes light reflected from objects which are not shiny or specular. In real life terms what this means is that light is reflected off non-shiny surfaces such as the ground, walls, or fabric, to reach areas not directly in view of a light source. If the diffuse surface is colored, the reflected light is also colored, resulting in similar coloration of surrounding objects.