Laser Mégajoule (LMJ) is an experimental inertial confinement fusion (ICF) device being built near Bordeaux, in France by the French nuclear science directorate, CEA. Laser Mégajoule plans to deliver about 1.8 MJ of laser energy to its targets, making it about as powerful as its US counterpart, the National Ignition Facility (NIF). Laser Mégajoule is the largest ICF experiment to be built outside the US, where ICF research has been strongly related to nuclear weapons research. Likewise, one of Laser Mégajoule's primary tasks will be refining fusion calculations for France's own nuclear weapons industry.

Laser Mégajoule uses a series of 240 laser beamlines, grouped into eight groups of 30. Each beamline contains two main glass amplifiers, which are optically pumped using xenon flashlamps. A "feeder" laser beam is fed via optical fiber into each of the beamlines where it travels through the two amplifiers. In order to extract more power from the amplifiers, which are not particularly efficient in transmitting power to the beam, the laser pulse is sent through the amplifiers twice by an optical switch in front of a mirror. At the other end of the beamline a deformable mirror is used to remove imperfections in the wavefront.

The target chamber lies in a large experiment room in the middle of the building, with the beamlines arranged on either side. After being switched into the main room, the beams are first aimed towards the target chamber by mirrors, and then travel through an optical frequency multiplier to boost the frequency into the ultraviolet. The mirrors are arranged in order to have the pulse impinge in the middle of the chamber from all sides. 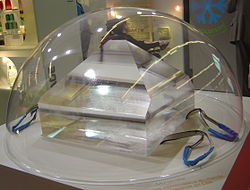 A huge monocrystal of potassium dihydrogen phosphate grown from solution by Saint-Gobain for frequency conversion on the LMJ.

Like NIF, LMJ intends to use the "indirect drive" approach, where the laser light is used to heat a high-Z cylinder made of some heavy metal (often gold) known as a "hohlraum". The hohlraum then gives off x-rays, which are used to heat a small fuel pellet containing a deuterium-tritium (DT) fusion fuel. Although considerable laser energy is lost to heating the hohlraum, x-rays are much more efficient at heating the fuel pellet, making the indirect drive method applicable to nuclear weapons research. The x-rays rapidly heat the outer layer of the pellet so quickly that it explodes outward, causing the remainder of the pellet to be forced inward and causes a shock wave to travel in through the pellet to the middle. When the shock wave converges from all directions and meets in the middle, the density and temperature briefly reach the Lawson criterion and start fusion reactions. If the rate of reactions is high enough the heat generated by these reactions will be enough to cause surrounding fuel to fuse as well, this process continuing until the majority of the fuel in the pellet is consumed. This process is known as "ignition", and has long been a goal of fusion researchers.

Construction on the Laser Mégajoule started with a single set of eight beamlines known as the Ligne d'Integration Laser (Laser Integration Line), or LIL, powered by a 450 MJ energy bank. When problems are worked out in the LIL, construction will continue with the construction of four more similar units and the installation of the additional beamlines. LIL was completed in 2002. Currently the entire LMJ system is expected to be completed in 2012.[1]