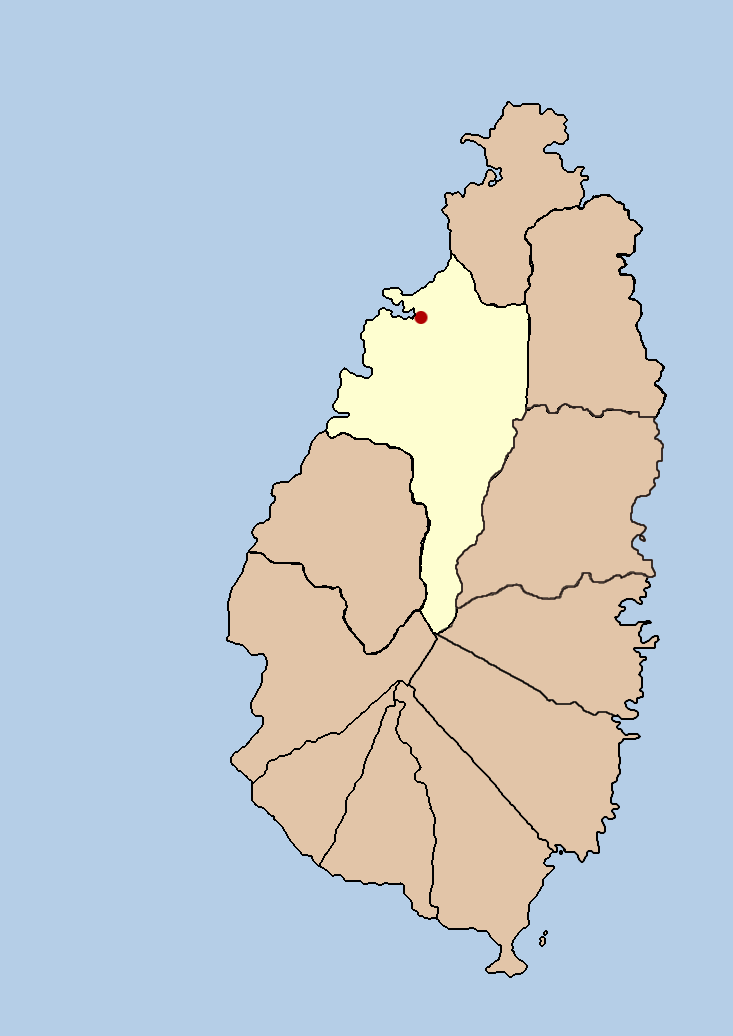 Castries is located in a flood plain and is actually built on . It houses the seat of government and the head offices of many of the businesses both foreign and local. The city's design is in a grid pattern similar to a metropolitan city like but on a much smaller scale. It has a sheltered harbour which receives cargo vessels and ferry boats as well as cruise ships. It contains shopping facilities such as Point Seraphine and La Place Carinage; many restaurants which offer varied menus from local to Chinese; supermarkets and many other shopping facilities. The city is well serviced by a bus system and taxi service.

St Lucia's main post office is located in Castries. Because most parts of the country do not use standard street addresses, mail is largely sent to P.O. boxes. Any mail sent without a town name ends up in the Castries post office.

Castries was founded by the French in 1650 as "Carenage" (meaning safe anchorage), then renamed in 1756 after , commander of a French expeditionary force to Corsica that year.The earlier settlement across the harbor at Vigie, started in 1651, was abandoned after the devastating hurricane of 1780.From 1803 to 1844 the British made the town a major naval port and built fortifications on Morne Fortune, the mountain which overlooks this important harbor. By 1844, Castries had a population of 4,000. By the end of the century it had become a major coaling station, because it was the only port in the Caribbean capable of holding the whole British navy.

During WWII, a German U-boat sailed into Castries harbor and sank two allied ships. Castries suffered major fires in 1796, 1813, Castries has been rebuilt, having been destroyed by fire several times, notably on .

One of the major tourist areas in St. Lucia, Castries is a port of call for cruise ships. Cruise ships doc at Pointe Seraphine, to the north of the harbour which is also a duty free shopping centre. A taxi service is readily available to take you on tours of the rest of the country or the city. There is also a water taxi available to take you from there to the city as well. The greatest concentration of hotels, resorts, and restaurants are near Castries and the island's other main towns, , , and . The city maintains three tourist offices, and one in the airport. There are also many duty free shops within the town itself and several restaurants and other eating establishments including Burger King, Dominoes and KFC.

Castries has a few landmarks such as the Cathedral of the Immaculate Conception, Derek Walcott Square (named after the island's Nobel Prize-winning poet, ), the Government House, and Fort Charlotte, at the top of Morne Fortune (an 845-foot hill) to name a few.

One of the major draws for tourists to St. Lucia is its beaches, and there are several in or very near Castries. , Malabar Beach, Choc Beach, and La Toc Beach are all within easy reach.

In addition to the Castries - Soufrière ferry route, ferries run regularly throughout the day between Castries and , . Yachts may also dock in Castries, though they must clear customs first. When the customs area is full, yachts must anchor at the quarantine dock to wait. Those who don't comply are fined. Afterward, yachts may anchor in front of Castries Town or Vigie Creek.

Standard bus routes run from Castries to all the outlying districts on the island. These buses can be identified by their green license plates with the numbers starting with an M example M456. There are designated areas where you can see these buses lined up awaiting passengers to take them to their destinations. On the front of these buses is what is called a "Route Band". It is luminescent and contains the words Route 1A or 1B.To get to other areas of the island, one can use these buses or the taxi service which have blue plates. The private minivan buses offer transportation from bus stops, or simply by being flagged down on the roadside. Always use buses with the green plates or if you can afford a Taxi those with the blue plates.

As well as being the capital city of Saint Lucia, Castries hosts the secretariat of the . Castries also hosts the headquarters of the .

A number of international embassies and consulates keep their headquarters in Castries. They include the , , , , , , , , , and .