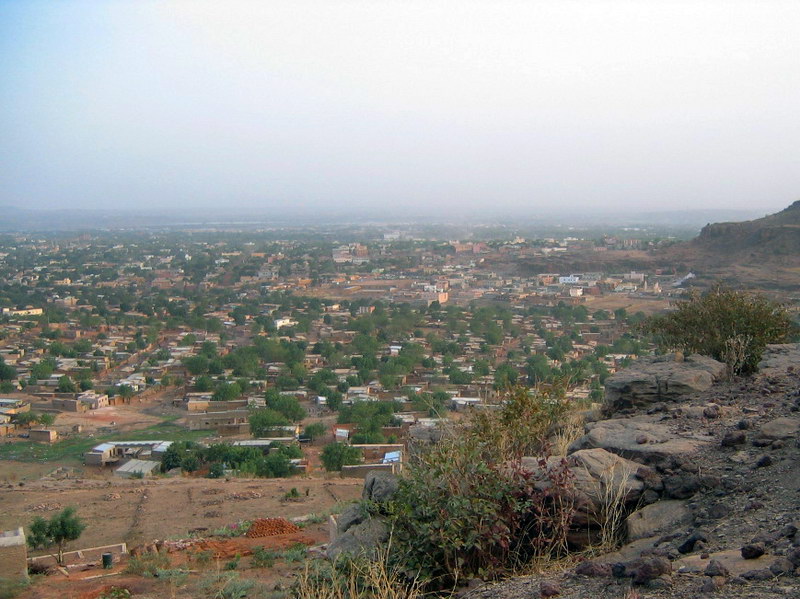 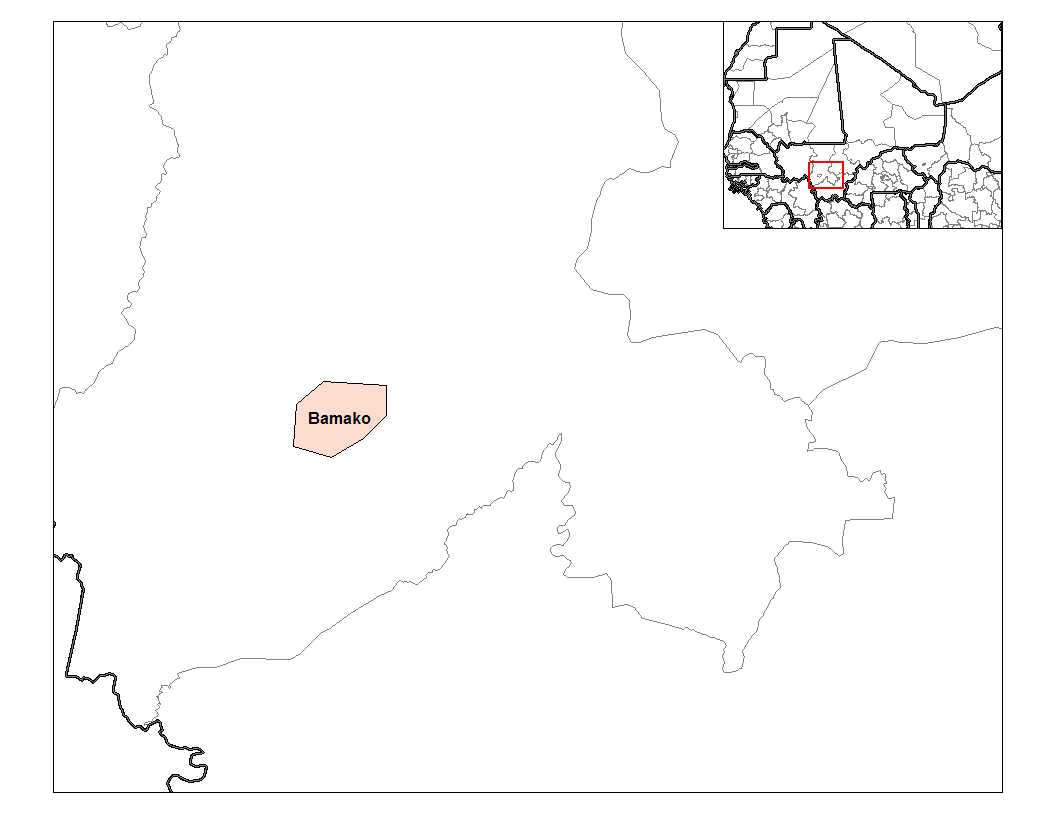 Bamako, population 1,690,471 (2006), is the and largest city of , and currently estimated to be the fastest growing city in Africa (6th fastest in the world) [ [http://www.citymayors.com/statistics/urban_growth1.html World's fastest growing cities and urban areas from 2006 to 2020] , by ] . It is located on the , near the rapids that divide the Upper and Middle Niger Valleys, in the southwestern part of the country. Bamako is the nation's administrative center, with a located in nearby , and a major regional trade and conference center. Bamako is the 7th largest West African urban center after , , , , and . Manufactures include , processed meat and goods. There is commercial ing on the Niger River. Bamako is located at coord|12|39|N|8|0|W|. [ [http://earth-info.nga.mil/gns/html/cntry_files.html GEOnet Names Server (GNS)] , by the ] The name "Bamako" comes from the Bambara word meaning "'s back". [ [http://select.nytimes.com/gst/abstract.html?res=F00F10FD3B5B137A93C1A91782D85F448685F9 SUDANESE IMPOSE SENEGAL BOYCOTT; Traders Told to Use Port in Ivory Coast -- Move Is Aimed at Dakar's Trade] New York Times - September 3, 1960]

The area of the city has been continuously inhabited since the , but the founding of Bamako occurred in the seventeenth century by and , or , before its chiefdom passed to . The city was an important . In 1883 the region was occupied by French troops, and in 1908, Bamako became the capital of the . Its population has grown rapidly; in 1960 Bamako's population was approximately 160,000.

Layout of the city

Bamako is situated on the Niger River floodplain, which hampers development along the riverfront and the Niger's tributaries. Bamako is relatively flat, except to the immediate north where there is an , being what remains of an extinct volcano. The Presidential Palace and main hospital are located here.

Originally, the city developed on the northern side of the river, but as it grew, bridges were developed to connect the north with the south. The first of these was the Pont des Martyrs (2-lane with 2 pedestrian sections) and the King Fahd Bridge (4-lane with 2 motorcycle and 2 pedestrian sections). Additionally, there is a seasonal causeway between the eastern neighborhoods of Sotuba and Misabugu inherited from colonial times (alternated traffic on 1-lane with 5 crossing sections). The ( "Chaussée submersible de Sotuba" in French, and "Babilikoroni" in Bamanankan) is typically under water from July to January. A third bridge (1.4 km long, 24 m large, 4-lane with 2 motorcycle and 2 pedestrian sections) is being built by at the same location [ [http://www.maliweb.net/category.php?NID=18466 Construction du 3e Pont de Bamako : Maliens et Chinois d'accord sur les aspects techniques du projet] ] to reduce downtown congestion, notably by trucks.

The traditional commercial centre of Bamako is to the north of the river, and contained within a triangle bounded by Avenue du Fleuve, Rue Baba Diarra and Boulevard du Peuple. This area contains the Marché Rose and Street Market. The downtown area is highly congested, polluted, and expensive, and urbanization is sprawling at a rapid pace within a radius of 30 km. The largest urbanized area now lies on the southern bank of the Niger River. A modern Central Business District is rapidly developing immediately west of the downtown area in the ACI-2000 district, taking advantage of a well-designed geometric layout, legacy of the old airport runways and taxiways. A large Administrative City is being developed at the junction between ACI-2000 and the King Fadh Bridge, purportedly to host most state departments (ministries) and administrative services in a central location.

Notable landmarks in Bamako include the , Tour BCEAO, , and the . It is home to Mali's largest international , , as well as the , to in eastern Mali and in . Attractions include the , the , the , , the , the and the hill, containing s with s. Bamako has hosted the biannual photography festival since 1994.

In 1988, Bamako was the location of a WHO conference known as the that helped reshape health policy of .

The yearly held rally has the endpoint in Bamako, with the often passing through Bamako.