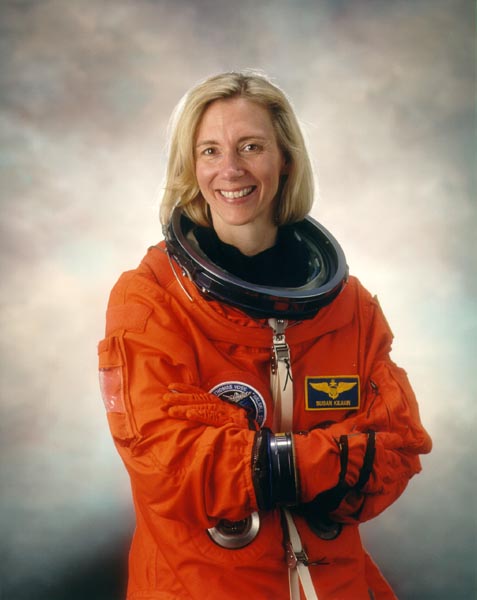 Susan Kilrain (b. , ) is a former United States Naval officer and a former

She was born as Susan Leigh Still to Joseph Still, M.D. and his wife, Jean Ann Batho; she has nine siblings. Her father was a prominent burn surgeon who founded and directed the Joseph M. Still Burn Center in .

After graduation, Kilrain worked as a wind tunnel project officer for in , and earned her graduate degree. She was commissioned in 1985 and designated a naval aviator in 1987. Kilrain was selected to be a flight instructor in the Skyhawk, and later flew Electric Intruders for Tactical Electronic Warfare Squadron 33 in , . After completing Test Pilot School, she reported to Fighter Squadron 101 in , , for training. Kilrain has logged over 3,000 flight hours in more than 30 different aircraft.

Kilrain reported to the as an Astronaut Candidate in March 1995. Following a year of training, she worked technical issues for the Vehicle Systems and Operations Branch of the Astronaut Office. She also served as spacecraft communicator (CAPCOM) in mission control during launch and entry for numerous missions. A veteran of two space flights, she logged over 9000 hours in space. She flew as pilot on ( to , ) and ( to , ). She most recently was the Legislative Specialist for Shuttle for the Office of Legislative Affairs at NASA Headquarters, . Kilrain retired from the Astronaut Office in December 2002 and from the U.S Navy in 2005. [ [http://www.jsc.nasa.gov/Bios/htmlbios/kilrain.html Susan L. Kilrain Biography at NASA] ] [ [http://www.erau.edu/er/newsmedia/newsreleases/1997/still.html Embry-Riddle's First Astronaut to Pilot NASA's First Microgravity Science Mission] ]