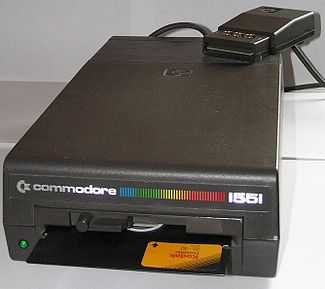 The Commodore 1551 (originally introduced as the SFS 481) was a floppy disk drive for the Commodore Plus/4 home computer. It resembled a charcoal-colored Commodore 1541 and plugged into the cartridge port, providing faster access than the C64/1541 combination. Commodore reportedly planned an interface to allow use of the 1551 with the C64, but it was never released.

Aside from faster access, the drive was very similar to the 1541. Like the 1541, it was a single-sided 170 kilobyte drive for 5¼" disks, with each disk split into 664 256-byte 'blocks' available for user data plus 19 blocks for DOS data and directory; the file system made each block its own cluster. As with the other Commodore single-sided diskette drives 1540 and 1541, both sides of double-sided media could be used only after punching a second write-protection marker hole in the diskette's envelope and inserting the medium upside down into the drive. This became common practice, even more so since single-sided media became rarely available with prices matching those of double-sided disks.

The disk drive used Group Code Recording and contained a MOS Technology 6510T processor as a disk controller. The 6510T was a specialized version of the 6510 processor used in the C64, and it was only used in the 1551. The DOS limited the number of files per disk to 144 regardless of the number of free blocks on the disk because the directory was of a fixed size, and the file system did not allow for subdirectories. The 1551's DOS was compatible with the 1541, so disks written by one drive could be utilized in the other.

The 1551 is less common than other Commodore disk drives. The 1541 was more readily available as it was compatible with the popular C64 and VIC-20, so many people opted to use 1541s with the Plus/4. Since the 1551 was compatible only with the Plus/4, which was a poor seller in the United States, few were made. In Europe, the Plus/4 was much more successful, but because tape drives were the most popular storage device in Europe in the 1980s, the 1551 was not very popular in Europe either.