The following cities have, or have had, s.

* , retains most of its city walls that separate the historic Inner City from the newer parts of the city developed after 19-th century.

* The city of Binche sports the most intact set of city walls of Belgium. Built in 1230 AD, they are 2.1 kilometers long and sport about 30 towers. There were six gates, but these have been demolished in the 19th century.
* Of the first city wall, built in the 13th century, a small stretch of curtain wall and several isolated towers still remain. Of the second wall, only the Halle gate remains. The inner ring road of Brussels now occupies the location of this second wall.
* To the north of the city centre, one can still find two polygonous fronts featuring a land gate; a watergate and a . An outer wall in front of this wall fragment sports two casemated caponieres. To the east, the shape of several bastions have remained intact. An outer work, to the east of the fortifications, is incorporated in a swimming pool complex. The Citadel remains mostly intact, although the side facing the city was demolished to make room for barracks. There is a small fortress to the north of the city centre.
* Several towers and fragments of the 12th century first wall of Leuven can be found throughout the city centre. Of the second wall, only the ground floor of a watchtower and the base of a watergate over the Dijle river still stand. The second wall was changed into a park in the 19th century, this park was largely destroyed and replaced by a ring road in the 20th century.
* Several towers and fragments of the medieval city wall remain on the slopes to the north of the old town. The south side of the citadel, featuring three bastions and two ravelins, remains intact. The rest of the citadel was demolished and now the site houses a large hospital. A ring of detatched fortresses still encloses the city.
* Several fragments of the first city wall of mons have been preserved. Of the later defences, only two bastion-like structures remain to the south of the city centre, but the location of the fortifications can still be seen in the zig-zagging street pattern on the east side of the city.
* Nothing remains of the defences of the city itself, with the exception of the enormous arsenal building. The mighty citadel that grew out of the medieval count's castle, ramains mostly intact and can be visited.
* Important parts of the 13th century wall, including several towers and a gate, remain. Outside the medieval town, one can still find remnants of the first Roman wall, which enclosed a much larger area than the medieval wall. Of the much smaller second Roman wall, no above-ground remnants remain.
* A wall with 3 unusually flat bastions defends the east side of the city. To the south a medieval gate and the lower portions of two medieval towers can be found. Both towers are defended by a ravelin.
* Remnants of the first 12th century city wall and a gate can be found incorporated in the old city hall and the adjacent house. Outside the city, a bridge over the river Gete incorporates a partial reconstruction of a 14th century watergate belonging to the second wall. To the south of the city, several low hills in the landscape indicate the position of a spanish-built

* has well-preserved city s including towers, gate, rampart walk and two s guarding the docks.
* city walls which obtained their current appearance between the 12th and the 15th century but the town itself was fortified since Roman period
* : Walls built in 14th-16th century, at the isthmus of the peninsula, to the north of Dubrovnik; 890 meters long town wall and 5 km "Great Wall" outside the town .
* city walls, built in as a six-point star with bastions.
* The town of retains much of its ancient wall.
* retains about half of its wall

*
*
* has partial fortifications still standing.
*
*
* has fortress plan and structure, called a star fort it is a nine pointed citadel [http://en.wikipedia.org/wiki/ 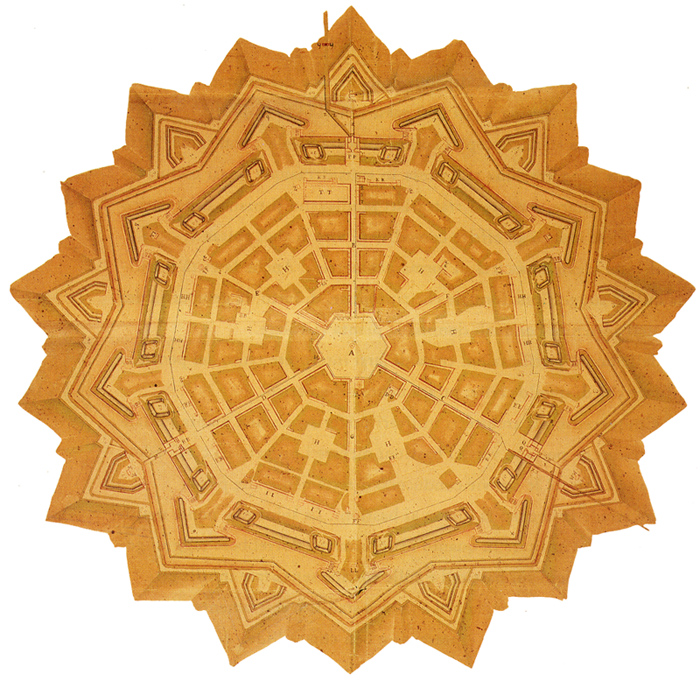 * (Can be seen in some places)
* (Partially built)

* Ancient city wall surrounds the old part of Ohrid, which is called Varos.

*
*, today only few structures have survived from original fortifications.
*
*

*
* has a part of the western city wall left, the Carolus Rex at Esperanto platsen (Esperanto square) and most of the city is still left.
* has a small remainder of the medieval city wall preserved.

* (Dominated by its three castles: Castelgrande, Castello di Montebello and Castello di Sasso Corbaro)
*
* : The wall on the northern bank of is well preserved and amongst the principle landmarks of the city.

* . The ancient city of Troy was famous for its defensive walls. There is archaeological evidence that , generally identified as the stage of the of the legendary of 's , usually dated between – , had walls with a carefully built stone base over four meters thick and some nine meters high in places, which was surmounted by a larger superstructure with towers in mudbrick. The walls in Homer's epic are so mighty that the siege of Troy by lasts more than nine years, and only could be finished with the trickery of the . Sections of the stone base of Trojan walls still survive on the archaeological site in present day "Hisarlık", in .

* . The system of walls around (as it was then known) built in 412 by the Roman emperor was a complex stone barrier that stretched 6.5 kilometers and is often called the Wall of Theodosius. This barrier stood impregnable for ten centuries and resisted several violent sieges until 1453 when the Ottomans succeeded in breaching the walls. There was a new element in the field: the Ottoman army had powder and the walls offered limited resistance to them.

*
* Bath - built in the , though only one fragment remains today.
*
* - the North Gate is still present, the site of the former Postern Gate still very visible; and parts of the wall now form garden walls in various parts of the town.
*
*
* - the city walls are one of the city's biggest tourist attractions. They were originally built by the Romans.
*
* - the town was surrounded by a wall built by the Romans after Boudica had sacked the town. Approximately half of the walls remain.
* - the walls were demolished in . Two gates survive, connected by a section of wall that runs through Lady Herbert's garden. Other small fragments dotted around the city centre, mainly hidden by modern buildings, include the remains of a bastion near Upper Well Street. Several fragments have been incorporated into newer buildings.
*
* - about two-thirds of the wall remains. Of the original eighteen towers, eleven survive.
*
*
*
*
* Lincoln - fragmentary remains
* - fragments of , the wall that once surrounded the Roman town of , are still visible just outside the and at Tower Hill in the .
*
* - much of the town wall was demolished during the late 18th and early 19th centuries but several sections still remain.
*
* - major fragments are preserved in the gardens of New College and Merton College and as part of the exterior wall of Pembroke College on Brewer Street.
*
* - one section remains along the 'Town Walls' road
* - the nearby deserted Roman town of has a complete set of walls.
*
*
* Wareham
*
*
*
* - the extensive remains of the city walls are both a shortcut above the streets and, as in many places, a tourist attraction.

*
*
* walls withstood a siege during the and are amongst the best preserved in Europe.

* Edinburgh's city wall (part of which survives as the ) was so restrictive that it led to the development of an underground slum to accommodate its high population density. More remains of the now abandoned slum than does of the wall, of which only fragmentary sections remain.Fact|date=July 2007
*

* Chinese cities occasionally have remnants of city walls that were built in the and designed to withstand bombardment. Chinese cities generally outgrew their walls, which fell into disrepair in the . The city of has well-preserved walls with a water filled moat that is a tourist attraction incorporating small parks surrounding a busy and modern area of the city.
* The walls of were demolished during the 1960s to open large streets around the city. A metro line also follows the location of the former city walls.
* , see City Wall of Beijing
* , see
*
*
*
* Walled villages can still be found in and .
*

* Acre - modern Ottoman fortification able to withstand cannons attack. The wall has been restored and now includes rampart for tourists.
*

Almost every old city in had a defensive wall. Much of these walls were destroyed by the British in order to defortify the cites. Few cities which were fortified are:

* - partially preserved, partially restored after WWII. Original walls are still well preserved.
* - in Cebu
* - in
* - a Spanish defence fort in the island of

*
* was surrounded by a moat and city walls when it was established by King in 1296. They were extensively rebuilt in the early 19th century. Large parts of the city walls and city gates of the Chiang Mai survived till the present.
* Chiang Saen
* Kamphaeng Phet
*
*
* Phrae
* Si Satchanalai
* Sukhothai

* , was well known for its city wall, the remains of which can still be seen

*, in Nigeria, is also well known for its city walls, the remains of which can still be seen around the city.

North / South America and the Caribbean

* The are the only fortified city walls in the north of that still exist.
* , Quebec Remnants of Montreal's nearly demolished city wall remain surrounding the Old Port neighborhood.

* was a fortified city from the 16th century to the early 20th century. Parts of the wall are still visible in the Colonial Zone. One of the main gates is very well preserved and centuries ago was named "The Gate of the Count" after the Count of Peñalba, who stopped the invasion of Penn and Venables in 1655.

* , in , is named for the rampart, or wall, that protected the from invading English and Native Americans during the city's early days. Dismantled during Spanish Rule.
* , located in the in , in , is named after the wooden fortification that ran along the northern border of original Dutch colonie. Contrairy to popular myth, it was used to keep out wolves and other wild animals, and not the Native Americans who were still living in the area.
*
* (Walls no longer extant)