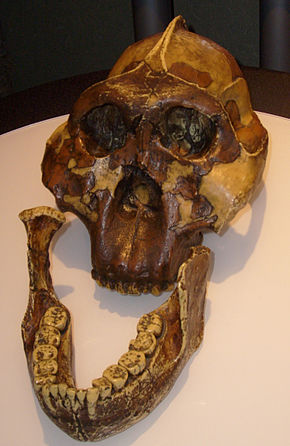 Mary Leakey (6 February 1913 – 9 December 1996) was a British archaeologist and anthropologist, who discovered the first skull of a fossil ape on Rusinga Island and also a noted robust Australopithecine called Zinjanthropus at Olduvai. For much of her career she worked together with her husband, Louis Leakey, in Olduvai Gorge, uncovering the tools and fossils of ancient hominines. She developed a system for classifying the stone tools found at Olduvai. She also discovered the Laetoli footprints. In 1960 she became director of excavation at Olduvai and subsequently took it over, building her own staff. After the death of her husband she became a leading palaeoanthropologist, helping to establish the Leakey tradition by training her son, Richard, in the field.

Mary Leakey was born Mary Douglas Nicol on 6 February 1913 in London, England to Erskine Edward Nicol and Cecilia Marion (Frere) Nicol. Since Erskine worked as a painter, specializing in watercolor landscapes, the Nicol family would move from place to place, visiting numerous locations in France, Italy, and Egypt where Erskine painted scenes to be sold in England. Erskine Nicol developed an amateur enthusiasm for Egyptology during his travels. Mary Leakey was a direct descendant of antiquarian, John Frere, and cousin to archaeologist, Sheppard Frere, on her mother's side. The Frere family had been active abolitionists in the British colonial empire during the nineteenth century and established several communities for freed slaves. Three of these communities remained in existence as of Mrs. Leakey's 1984 autobiography: Freretown, Kenya, Freretown, South Africa, and Freretown, India. She also was a distant relative of baronet Henry Bartle Frere.[1]

The Nicols spent much of their time in southern France. Mary became fluent in French. She identified more with the adventurous spirit of her father, going for long walks and explorations with him and having long talks. She disliked her governess and had less sympathy for her mother.

In 1925, when Mary was 12, the Nicols stayed at Les Eyzies at a time when Elie Peyrony was excavating one of the caves there. Peyrony did not understand the significance of much of what he found, and was not excavating scientifically during that early stage of archaeology. Mary received permission to go through his dump. It was there that her interest in prehistory was sparked. She started a collection of points, scrapers, and blades from the dump and developed her first system of classification.[2]

That winter, the family moved to Cabrerets, a village of Dordogne, France. There she met Abbé Lemozi, the village priest, who befriended her and became her mentor for a time. The two toured Pech Merle cave to view the prehistoric paintings of bison and horses.[3]

In the spring of 1926, in Mary's 13th year, her father died of cancer. The services were read by Lemozi. Erskine's brother, Percy, came to take them back to London. Cecilia sold Erskine's paintings and moved to a boardinghouse in Kensington. She placed Mary in a local Catholic convent to be educated, following the example of her own life. Later, Mary boasted of never passing an examination there.[4] Mary could not even excel at French, although she spoke it fluently, because her teacher frowned upon her provincial accent. She was expelled for refusing to recite poetry, and then expelled from a second convent school for causing an explosion in a chemistry laboratory.[5]

After the second expulsion her mother hired two tutors, who were no more successful than the nuns, and mother and daughter visited Stonehenge. Mary's only particular interests were drawing and archaeology. Formal university admission was impossible with Mary's academic record. Her mother contacted a professor at Oxford University about possible admission. After being informed that it was not even worth her time applying, Mary had no further contact with the university until it awarded her an honorary doctoral degree in 1951. So the small family moved to Kensington where she could attend lectures unregistered in archaeology and related subjects at University College London and the London Museum, where she studied under Mortimer Wheeler.[6]

She applied to a number of excavations to be held in the summer. Wheeler was the first to accept her for a dig at St. Albans at the Roman site of Verulamium. Mary's second dig was at Hembury, a Neolithic site, under Dorothy Liddell, who coached her for four years. Mary's illustrations of tools for Dorothy drew the attention of Gertrude Caton-Thompson, and in late 1932 she entered the field as an illustrator for Caton-Thompson's book, The Desert Fayoum.[7]

Through Gertrude, Mary met Louis Leakey, who was in need of an illustrator for his book, Adam's Ancestors. While she was doing that work they became romantically attached. They shared common interests and values: a love of freedom and dislike for rules, an egalitarian frame of mind extending even to animals, a desire for adventure, and a passion for archaeology. Louis was still married when he started living with Mary, which caused a scandal that ruined his career at Cambridge University. They were married when Louis' wife Frida divorced him in 1936.

From then until about 1962 Louis and Mary faced trying circumstances together. Early in their relationship he nursed her through double pneumonia. They had three sons: Jonathan in 1940, Richard in 1944, and Philip in 1949. The boys received much of their early childhood care at various anthropological sites. Whenever possible the Leakeys excavated and explored as a family. The boys grew up with the same love of freedom their parents had. Mary would not even allow guests to shoo away the pet hyraxes that helped themselves to food and drink at the dinner table. She smoked very much, first cigarettes and then cigars, and dressed as though on excavation.

Louis was not always faithful to Mary, as he had not been to Frida. In 1960 they agreed that Mary would become director of excavations at Olduvai. From then on she operated more or less independently, taking over the dig. After Louis became known as a womanizer the intimate side of the marriage was effectively over. For example, Louis became briefly involved with Dian Fossey. Meanwhile, Mary's life consisted mainly of her children, her dogs, and her archaeology. Louis died on 1 October 1972 of a heart attack. Mary continued the family's archaeological work.

For more details on this topic, see Louis Leakey.

Mary carried on after Louis, becoming a powerful and respected figure. By then Richard had decided to become a palaeoanthropologist. She helped his career significantly. The other two boys had opted to follow other interests.

Mary died on 9 December 1996 at the age of 83, a renowned palaeoanthropologist, who had not only conducted significant research of her own, but had been invaluable to the research careers of her husband Louis Leakey and their sons Richard, Philip and Jonathan. 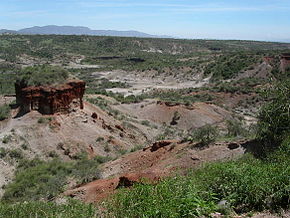 Leakey served her apprenticeship in archaeology under Dorothy Liddell at Hembury in Devon, England, 1930-1934, for whom she also did illustrations. In 1934 she was part of a dig at Swanscombe where she discovered the largest elephant tooth known up to that time in Britain, but needed assistance to identify it.[8]

The years 1935 to 1959, spent at Olduvai Gorge in the Serengeti plains of Northern Tanzania, yielded many stone tools from primitive stone-chopping instruments to multi-purpose hand axes. These finds came from Stone Age cultures dated as far back as 100,000 to two million years ago.

The Leakeys unearthed a Proconsul africanus skull on Rusinga Island, in October 1948. This skull was the first skull of a fossil ape ever to be found and, to this day, only three specimens of these apes are known.

Their next discovery, in 1959, was a 1.75 million-year-old Australopithecus boisei skull, catalogued as OH 5. They also found a less robust Homo habilis skull and bones of a hand. After reconstructing the hand, it was proven the hand was capable of precise manipulation. Many more remains were found at this site. In 1965 the husband and wife team uncovered a Homo erectus skull, dated at one million years old.

After Mary's husband died, she continued her work at Olduvai and Laetoli. It was here, at the Laetoli site, that she discovered Hominin fossils that were more than 3.75 million-years-old. She also discovered fifteen new species of other animals and one new genus.

From 1976 to 1981 Leakey and her staff worked to uncover the Laetoli hominid footprint trail which was left in volcanic ashes some 3.6 million years ago. The years that followed this discovery were filled with research at Olduvai and Laetoli, the follow-up work to discoveries and preparing publications.