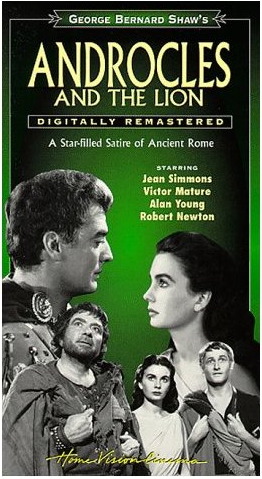 Androcles is an escaped slave who is on the run from his Roman captors. While hiding in the forest he comes upon a wild lion who, instead of attacking the weak and starving slave, approaches him with a wounded paw, which he holds out to Androcles as if to beg his assistance. Androcles sees that the source of the lion's agony is a large thorn embedded in the paw, which the slave, not without first finding some considerable courage, pulls out. The lion is greatly relieved and for some time brings Androcles food which it has killed. Soon however the slave is recaptured and sentenced to be thrown to the lions in the colosseum. When the slave stands in the arena, alone and with nothing but a sword to defend himself with, the lion is released upon him. It turns out to be, of course, none other than the very same lion which Androcles had helped, and the two embraced each other, not only as old friends but also as two slaves now both in the same boat - in front of thousands of aghast people and an astonished Roman Emperor. Upon hearing Androcles' tale, so surprised was the Emperor that he at once ordered the slave to be freed, and released them both.

This was Gabriel Pascal's last film, made two years after the death of his long-standing mentor and partner Bernard Shaw and two years before his own death in 1954. Alan Young later went on to play the leading role in the 1960s series, , a show about a talking horse.