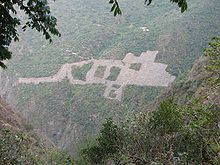 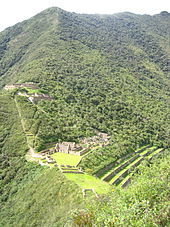 The main structures of Choquequirao 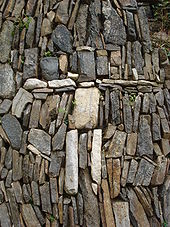 White stone woman in the terraces of Choquequirao 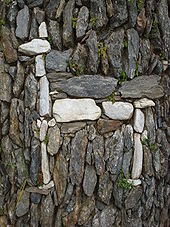 White stone llama in the terraces of Choquequirao

Choquequirao (Southern Quechua: Chuqi K'iraw, Cradle of Gold) is a ruined Inca city in south Peru, similar in structure and architecture to Machu Picchu. The ruins are buildings and terraces at levels above and below Sunch'u Pata, the truncated hill top. The hilltop was anciently leveled and ringed with stones to create a 30x50 platform.

Choquequirao (3,050 m[1]) is in the spurs of the Salkantay Mountain Range in the Province La Convención in the Cusco region above the valley of river Río Apurímac. The complex is 1,800 hectares, of which 30-40% is excavated.[2][3]

The site is reached by a two-day hike from outside Cusco.[2]

The site was built during the reign of the Inca king Pachacuti Inca Yupanqui[1]. It may be the last bastion of resistance and refuge of the Sons of the Sun who fled Cusco when it was under siege in 1535. Led by Manco Inca Yupanqui they took refuge in Choquequirao.

According to the Peruvian Tourism Office, "Choquequirao was probably one of the entrance check point to the Vilcabamba region, and also an administrative hub serving political, social and economic functions. Its urban design has followed the symbolic patterns of the imperial capital, with ritual places dedicated to the Sun (Inti) and the ancestors, to the earth, water and other divinities, with mansions for administrators and houses for artisans, warehouses, large dormitories or kallankas and farming terraces belonging to the Inca or the local people. Spreading over 700 meters, the ceremonial area drops as much as 65 meters from the elevated areas to the main square."[1]

Presumably it was used as a check point for access to the Vilcabamba Area and as a cultural and religious center for the region. The city also played an important role as a link between the Amazon Jungle and the city of Cusco.

The typical Inca terraces form the largest constructions on site. A temple, some administrative buildings and the living quarters of the aristocrats are situated around the central square. On the outskirts of the site lie the living quarters of the common people grouped together in a small village. There are water channels, aqueducts and water springs. Most buildings are well-preserved and well-restored; restoration continues.

The Peruvian government plans a cable car to reach the ruins. Others have proposed a train similar to that used to Macchu Picchu.[4]

According to Ethan Todras-Whitehill of the New York Times, Choquequirao's first non-Incan visitor was the explorer Juan Arias Díaz in 1710.[5] The first written site reference in 1768 was made by Cosme Bueno, but was ignored at the time. In 1834 Eugene de Santiges rediscovered the site. In 1837 Leonce Agrand mapped the site for the first time, but his maps were forgotten. When Hiram Bingham, the discoverer of Machu Picchu, visited Choquequirao in 1909 the site gained more attention. The first excavations started in the 1970s.