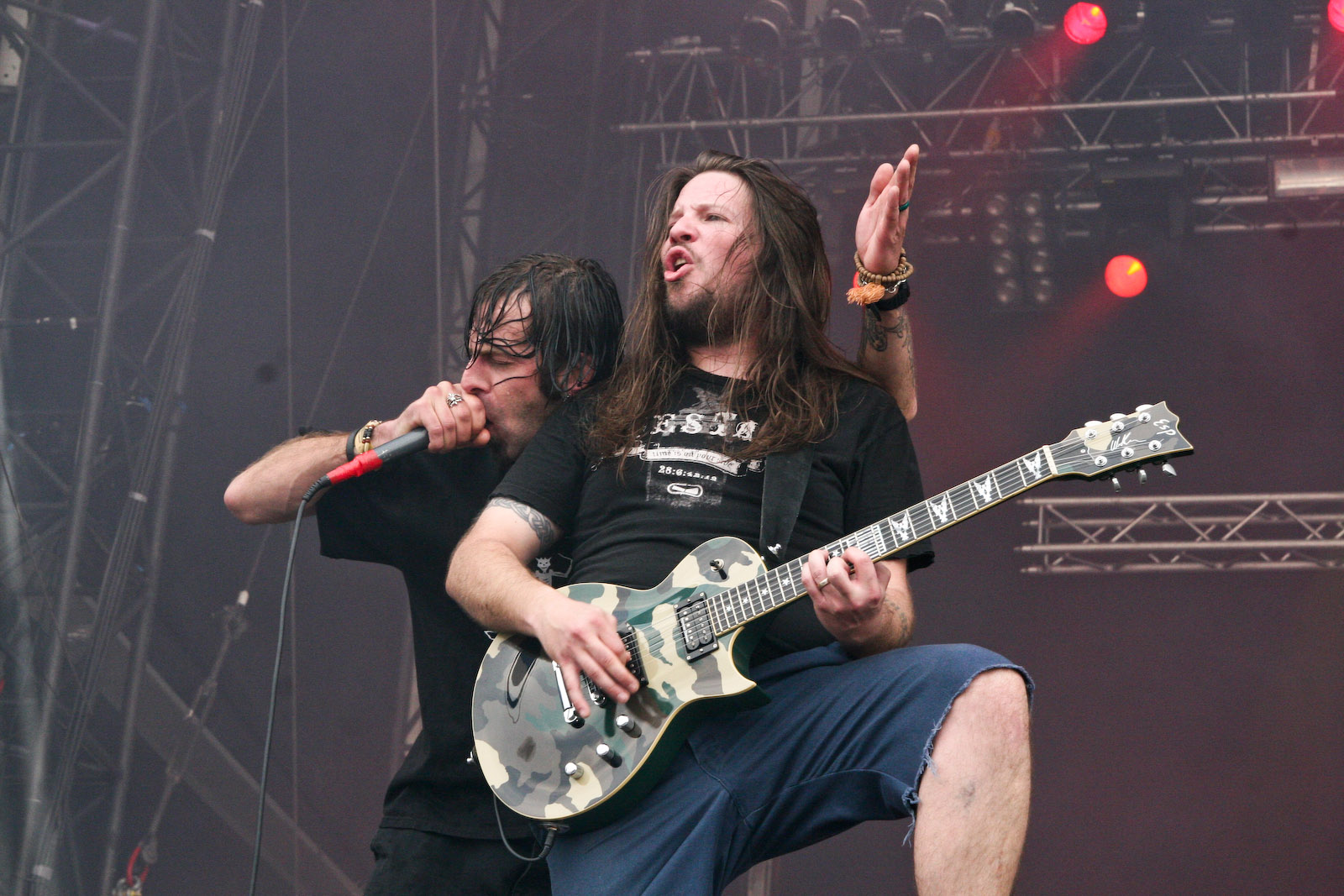 Lamb of God is an American heavy metal band formed in 1990 in . The band was originally known as Burn the Priest and decided to change their name shortly after the release of a self-titled debut album in 1998. Lamb of God consists of vocalist , guitarists Mark Morton and , bassist John Campbell, and drummer Chris Adler and is today one of the leaders of the .

Lamb of God's name originates from a title given to Jesus Christ. As the roll goes Jesus was a sacrificial lamb atoning for the sins of man as the term "" literally meaning "Jesus".

Since its formation, Lamb of God has released five studio albums, one live album, and three DVDs. The band's cumulative sales equal almost two million in the United States. In 2007 the band received a Grammy nomination for their 2006 album "Sacrament". Lamb of God has toured with the twice and appeared at the Download and festivals.

In 1997, Morton returned to the band. The following year, the band released its first full-length self-titled album, "Burn the Priest", through . The album was produced by guitarist and vocalist Steve Austin. Spear left the band, leaving an open position for a guitarist. Adler's brother, , became the band's second guitarist a year later, and a deal with was signed. After being banned from playing in certain places (some venue owners believing the band possessed an "evil" name), [cite web| author=Kelter, Christopher J. |date= |url=http://www.roughedge.com/features/lambofgod1100.htm |title=Pure American metal – An interview with Lamb of God |publisher="Rough Edge" |accessdate=2008-01-19] Burn the Priest changed their name to Lamb of God.

With a new name and label, the band released its second album, "", in September 2000.

Lamb of God toured for two years before releasing its third studio album, "", on May 6, 2003. Kirk Miller of "" gave the album three out of five stars who wrote that "unlike many of their overreaching, Slipknot-influenced contemporaries, Lamb of God deliver a meticulously crafted metal assault."

The band supported "Ashes of the Wake" with extensive touring, including a second stage slot on in 2004,

In August 2006 Lamb of God released its fifth studio album, "Sacrament". The album debuted at number eight on the "Billboard" 200 and sold nearly 65,000 copies in its first week of sales, nearly doubling the first week sales of "Ashes of the Wake". The album received generally positive reviews, with Cosmo Lee of "" stating, "Sacrament" has the band's most memorable songs to date. Musically, there's no fat. The band plays with laser precision and songs move smoothly through riffs and transitions."

In December 2007, the band re-released the album as "Sacrament: Deluxe Producer Edition". The release contained all of the original songs from "Sacrament" on the first disc, and the second disc was a featuring all of the vocal, bass, guitar, and drum tracks in 192kbit/s MP3 format, enabling the buyer to produce their own interpretation of the songs. Blythe stated, "you sometimes have to do something special to get kids to even buy an album these days rather than download it."

The recording process of the new record was made available to view online live through the band's website, with two webcams installed in the studio (specifically in the drum room and mixing room). [citeweb |url=http://www2.kerrang.com/2008/09/lamb_of_god_get_all_big_brothe.html |title=Lamb Of God get all Big Brother |publisher=Kerrang |accessdate=2008-09-11 |date=2008-09-11]

Lamb of God was formed as an instrumental band, Burn the Priest, and included vocals after joined the band as a vocalist. After they reached the success with the release of 2004's ""

"Burn the Priest" and early Lamb of God has been defined as a , and

"" continues in a similar style as "Burn the Priest", with drum-heavy production of double picking and double-kick drumming. Here, the band has been considered by to be effectively bridging the 1990s' tendency towards technicality and early metal's focus on riff construction and plays a brand of heavy metal described as not unlike without some of their mathematical components.

2003's "" saw the band's compositions focusing more on what some have called "memorable" riffs. On 2004's "", they continued the progression of "As the Palaces Burn" with more frequent guitar solos.

"Sacrament", released in 2006, was described by critics as more technical, especially considering the vocal performance. Again, the band experimented with more melody and guitar solos; however, the band has also been often reproached by the critics for the similarity of the songs within their albums.

Due to the variety of influences, stylistic elements and changes throughout the band's career the press has chosen several genres and terms to describe Lamb of God's music. Lamb of God has been labeled as a