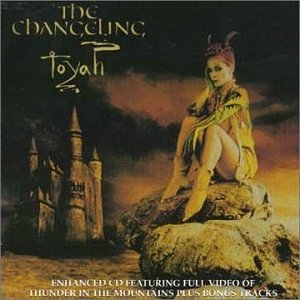 "The Changeling" was Toyah's follow-up album to the critically acclaimed "Anthem". Although it has a similar overall sound, the band's writing took a darker, almost gothic direction. Tracks such as "The Packt" and "Brave New World" take a rather dystopian although still hopeful view of the future, a theme which largely pervades the whole album.

The Changeling was not released on CD until 1999, although this long-awaited release did at least include six bonus tracks, four of which were previously unavailable on CD, and the video for "Thunder In The Mountains".

Original vinyl issues of the album came complete with a lyric insert, the background of which featured drawings of circuit boards. Around the lyrics of each song were sections of poetry written by Toyah Willcox, which were not included on the album.

The album was released internationally and sold particularly well in the UK (#6) and Norway (#22).

On the cd reissue, the ending of 'Angel & Me' has been edited. After the song has faded out, the original vinyl version featured an echoed drum roll that resembled the sound of a door being locked - this was absent on the cd.